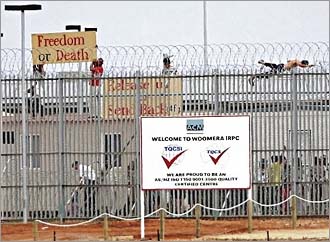 Mahzer Ali, uncle to the Bakhtiari boys, jumps on the razor wire at the Woomera detention centre on 10 February 2002 in a desparate way showing his fury about the treatment of children in detention centres.

2002 was the year of the Woomera 'hell-hole', the protests, the massive Easter protest and the subsequent spectacular break-out of 52 Woomera detainees.

It was also the year that, in terms of media coverage, started when Mahzer Ali, uncle to the Bakhtiari boys, jumped on the razor wire at the Woomera detention centre on 10 February 2002. Mr Mahzer, who arrived in Australia with Mrs Roqia Bakhtiari, seriously injured himself, in a desparate way showing his fury about the treatment of children in detention centres and the way the boys were treated in Woomera.

Below are the pages we added to the website during the calendar year 2002. There are also some links to other pages and sections on the website.

The call for a Royal Commission into detention and the treatment of refugees, asylum seekers and immigration detainees has always been relevant, especially since the 2001 Tampa stand-off. With Downloadable Petition Form!

13 December 2002: Friday the Thirteenth: Friday the 13th of December 2002 was an eventful day in the Australian Parliament. The ASIO Bill stalled. The light went off for a while during the marathon sitting of The House. And once again, Australia veered near the abyss of a failed democracy.

7 December 2002: Happy birthday Project SafeCom! - Some appropriate bragging brought together about what we achieved in 2002, since we incorporated as a registered community organisation in Western Australia.

7 December 2002: Justice for Asylum Seekers Alliance: Reception and Transitional Processing System - Speaking at the Mudgee Rural Australians for Refugees Conference, Grant Mitchell presents an alternative approach to dealing with the processing of asylum seekers for Australia: The Reception and Transitional Processing System provides a realistic, detailed and soon to be costed reform of the immigration detention system which resolves many of the serious problems...

30 November 2002: Cry Freedom! ... something about a movie ... - This page relates some information posted by detainees in Australia's detention centres, while the word 'FREEDOM' is posted in four languages on the page: In Arabic, Farsi (also Urdu, Hazaran and Dari), in Tamil, and Sinhalese.

21 November 2002: Who do you think you're kidding Mr Ruddock? In his own words - a profile of Philip Ruddock. A valiant attempt by Garry Bickley in seeking truth by juxtaposing hundreds of 'spun statements' by the former Immigration Minister Philip Ruddock against its opposites, attempting to take the clothes off the Minister and expose the spin as downright lies - or at best, as untruths.

8 October 2002: A presentation to Council: Newcastle as a Welcome Town - This is the actual presentation to the City of Newcastle by Newcastle Action for Refugee Rights (NARR) during a council meeting in 2002, which assisted the council motion being supported and carried to declare Newcastle to become a 'Welcome Town' for refugees. The material was presented by Steve Georgopoulos and Anne McLaughlin.

19 September 2002: The Great Australian Brain Robbery: the hijacking of the Australian conscience - Hon Marcus Einfeld delivers the Annual Human Rights and Social Justice Lecture. "When will our leaders of both the major political groupings decide to lead, not follow, the prejudices and ignorance of those who do not want to know the truth lest they be embarrassed by it?"

15 September 2002: Newcastle and Bega become Two Welcome Cities - Thanks to the local government lobbying of many refugee advocates, both from Rural Australians for Refugees and Newcastle Action for Refugee Rights (NARR), the City of Newcastle as well as the Bega Valley Shire recently tabled motions that were endorsed and carried, endorsing the concept of Welcome Towns, formulated by RAR.

25 August 2002: Developing Just Refugee Policies in Australia: Local, National and International Concerns - Fr Frank Brennan at the Bowral Town Hall: "During the 2002 financial year, Afghan asylum seekers got it right 62% of the time when they claimed that the Immigration Department decision makers got it wrong. And the public servants got it wrong 87% of the times that the Iraqi applicants claim to have been mistakenly assessed."

25 June 2002: Hundreds endorse the June 2002 Woomera detention centre hungerstrike - Almost 200 asylum seekers locked up in Woomera started a hungerstrike in June 2002, and issued a statement. We asked for public endorsements of their statement and cause, and within days more than 660 organisations, alliances and individuals sent their names and comments.

25 June 2002: The June 2002 Woomera hungerstrike: endorsements 1-400 - Almost 200 asylum seekers locked up in Woomera started a hungerstrike in June 2002, and issued a statement. We asked for public endorsements of their statement and cause, and within days more than 660 organisations, alliances and individuals sent their names and comments.

25 June 2002: The June 2002 Woomera hungerstrike: endorsements 401-600 - Almost 200 asylum seekers locked up in Woomera started a hungerstrike in June 2002, and issued a statement. We asked for public endorsements of their statement and cause, and within days more than 660 organisations, alliances and individuals sent their names and comments.

25 June 2002: The June 2002 Woomera hungerstrike: comments - "Current Government policy on refugees makes me ashamed to be Australian. This country has been built on refugees and we are now shunning our roots, as though they are not worthy."

25 February 2002: The Refugee Welcome Towns: RAR (Rural Australians for Refugees) developed the model of Welcome Towns as an alternative to detention. We're lobbying local government in Western Australia to adopt this model.

1 January 2002: Boatpeople: those that Come by the Sea - One of our early pages about "boat people", so vilified by John Howard. Includes a section of the UNHCR Revised Guidelines Report and Recommendations, and a public statement by 600 lawyers to Australia's Prime Minister.

12 December 2001: Eminent Australians reply to John Howard's extremist refugee policies - Australian as well as overseas Humanitarian agencies have stepped up their calls on John Howard's Australian Government for a dramatic increase in assistance in aid for refugees and for a reversal of its attitude towards the refugee issue. Since and after the 2001 Federal Election, a host of eminent Australians have joined that call, sometimes in very strong terms.

10 December 2001: What is Project SafeCom: implementing a rural community vision - This page is a bold vision dating back from the early days of our organisation, and written within the context of how things could have developed using community and education funding models available during the Hawke & Keating era.

7 December 2001: Facts and Myths in Australia about refugees - A lot of confusion exists amongst people in Australia about "refugees" and "asylum seekers". Both of these terms have almost habitually become replaced in everyday usage by many Australian people - following the preferred terminology by the Howard Government - by the terms "queue jumpers" and "illegal immigrants".

7 December 2001: Kidz Privacy: Are you younger than 18 years of age? - a page about the US COPPA legislation. Although this is a relatively short page, hardly ever seen, it's linked off the membership application page, and it's about children's privacy and how Project SafeCom deals with it.

7 December 2001: Information sheet and guidelines for incorporation - The "official" part of forming a Corporation is about complying with the legislation and getting to know the legislation. Luckily the Department of Fair Trading has a lot of online resources, and we happily confess....

4 November 2001: The passing of Leâ Thaønh Nhôn - a great sculptor and painter left us. We dedicated a page to this refugee artist.