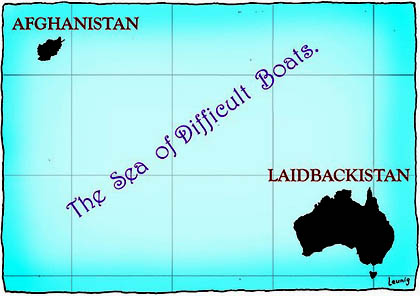 Why are both major parties so bankrupt in their politisation of boat arrivals? - Perhaps the year 2011 should be marked as the period where the political discourse about asylum seekers reached its deepest depth of rhetorical opportunism under the "old parties". The Liberal/National Conservatives led by Tony Abbott, and the Labor government under Julia Gillard, are equally culpable. With the introduction of the failed "Malaysia Refugee Swap Deal" Solution, a calculated and nasty bidding war about who's better at "stopping the boats" became established. The underlying notion that the passengers of those boats are asylum seekers claiming Australia's help under the UN Refugee Charter has now entirely drowned in the political cacaphony.

Perhaps the year 2011 should be marked as the period where the political discourse about asylum seekers reached new depths of rhetorical opportunism under the "old parties".

The Liberal/National Conservatives led by Tony Abbott and the Labor government under Julia Gillard engaged in a war of rhetoric and presented callous, risk-taking proposals.

With the introduction of the failed "Malaysia Refugee Swap Deal" Solution, a calculated and nasty bidding war about who's better at "stopping the boats" became permanently established.

The underlying moderation notion that the passengers of those boats are asylum seekers just seeking Australia's help under their UN Charter rights has now entirely suffocated in the political cacaphony.

On Saturday May 7, 2011 the Gillard government announced its "Malaysian refugee swap deal". Under this agreement all boat arrivals, starting with the first 800 asylum seekers arriving from midnight July 26 2011 would be "deported" to Malaysia. The government intended quarantining all maritime arrivals for this purpose - starting with the July 31 vessel.

However, a successful High Court challenge saw this agreement scuttled on 31 August 2011. The government responded by drafting amendments to the 1958 Migration Act to circumvent the High Court ruling so it could proceed with its original agreement.

This Bill however was not brought to a vote following fierce opposition by the Greens, the Liberal-National Coalition and Independent MP Tony Crook (Pearce). On 13 October 2011, the Gillard government accepted its defeat by stopping progress of its legislation in the House of Representatives. Instead, it announced that all maritime asylum seekers would now be processed "onshore" in Australia while insisting its plans for the refugee swap deal would be maintained.

The website pages dealing with Labor's "lurching to the right" and its swing to offshore processing were constructed during the calendar year 2013, but they really belong to this page. That's why the links to these pages are (also) below.

1 November 2013: Malaysia's response to Gillard's refugee swap plans - Not only proved Gillard's Malaysia refugee swap deal unpopular, legally condemned and fruitless in Australia, within weeks of its announcement it also came unstuck and was heavily criticised in Malaysia. Until the end of the Gillard government it was only Labor that kept harping on about it against better knowing. Australian reporters too shone a light on the prospects of asylum seekers under Malaysian rule, that was damning on all levels.

Below are all pages added to the website during the calendar year 2010, followed by our 2010 press releases.

12 December 2011: When Canberra neuters the courts - When asylum policies are unlawful, Australian politicians manipulate the law and make it legal. With the Deterring People Smuggling Bill 2011, the Gillard government responded just within the nick of time: one day before the courtcase was to come before the Victorian Court of Appeal, the measures were rammed through the House of Representatives within 54 minutes. Its sole purpose was to stymie the courtcase.

12 November 2011: A Suicide Bomber in Quetta and an Australian Poster - For Hazaras, it's bad enough being stuck in Quetta, Pakistan, when staying home in Afghanistan is too dangerous. Things get worse if you then get targeted in Quetta. Three recent photos of one such incident in Quetta show people are cleaning up the bodies against the backdrop of an Australian Government poster, depicting "a leaky boat" and warning people not to try to come to Australia in "the illegal way".

7 November 2011: Julia Gillard and Labor's factional warlords - The Gillard government's asylum politics in pictures. The raid on Kevin Rudd was not orchestrated by Julia Gillard, although she was a willing pawn in the ruthless raiding minds of the foolish apparatchiks in the right-wing factions of the Labor Party. Some members of these factions are known to have applauded John Howard and Philip Ruddock's merciless vilification of asylum seekers. A series of cartoons depicting the increasingly desperate political development vis-a-vis asylum seekers by the Gillard government.

6 November 2011: Australia's extra-judicial jailing of Indonesian children - We avoid the Criminal Code, because that would prevent us from jailing children without charges; we use discredited wrist X-ray testing to determine their ages without getting results in due time; while this goes on, our Immigration Department cowboys collude with Australian Federal Police in order to jail more than a hundred kids in adult Australian prisons. And barely anyone stirs this hornet's nest of Australia's medieval lock-em-up mentality.

16 April 2011: Island boys and Indonesian smuggling laws - Why did Indonesia formulate their anti-people smuggling laws? A massive political campaign has long told Australians that people smugglers are evil, that they are the scum of the earth, that they run a vile industry. That campaign has run in tandem with one convincing us that those sailing to Australia are 'illegal immigrants', 'queue jumpers' or 'economic forumshoppers'.