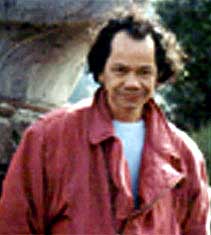 Le Thanh Nhon was an artist and refugee, who came to Australia from Saigon when it fell. He was born on 17 November 1940 at Thu Dau Mot - east of Saigon.

Le Thanh Nhon graduated from his studies in Saigon in 1964.

Nhon was a lecturer in fine arts at Saigon University, Saigon College of Fine Arts and The Imperial Capital of Hue College of Fine Arts, as well as a famous sculptor who has been acclaimed as a magician for his ability to combine the occidental influence of the French with Eastern Art. He also lectured at the University of the Duyen Hai Community in Nha Trang.

When Ho Chi Minh's Army ended Saigon he gathered his family together and ran for the docks. He was able to find one of his students and departed on a boat with his family and many others. 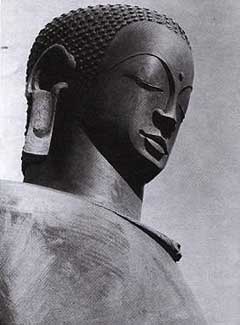 He left a city burning, certain that his sculptures which graced the public spaces would be destroyed and as the boat started to take on water he remembered his latest statue, a great Buddha, waiting serenely in the garden he would never see again.

The Seventh Fleet finally fished Nhon and his family from the sea. And the famous artist was now anonymous amongst a million other scattered people. He had become a refugee.

The cultivated artist, speaking many languages except for English, ended up in Melbourne. He became a tram driver and was grateful and not upset that his standing was unknown in this country because on the trams there were many people who could not speak English - they were from the Mediterranean, South East Asia and Turkey. They communicated with gestures and body language and built up their English later.

Resting against the corrugated iron wall of the garage there is a big painting of a Vietnamese heroine, who told the country's 18 tribes to rally their martial spirit and fight the rapacious Chinese invaders. Mr Le has painted his Joan of Arc in fierce colors.

"I wanted to encourage the Vietnamese to continue to fight the Communists. Sometimes, when we get material possessions, we forget our country. I wanted to remind people of the need to fight for human rights."

Recently, a patron asked Mr Le to build a monumental Buddha on his land in New South Wales. 'Some people have land which is the size of a pocket handkerchief, but this is the most beautiful land. When we met, he expressed his emotions, and I knew we could share our dream together."

Not long ago, Mr Le also discovered the fate of the 100 tonne Buddha that he left in Saigon. Although many of his statues were destroyed, Buddhist monks rescued the 4.5 metre Buddha and took it to a sanctuary 30 kilometres from Saigon.

"I don't know how they picked it up. When I saw the photograph of my Buddha I had the feeling of a mother who has found her lost child. I couldn't believe that my child was still alive. I was so happy. And the monk who rescued it, he also lives in Australia now."

Nhon won a prize in 1976 at the Asian Arts Exhibition & Competition, and was invited to attend the Painters' festival organised by the Morning Arts Centre in 1979. He also lectured at RMIT University in Melbourne. He was a former member of VNCH.

A short article about an exhibition of his paintings, one of them "The Music Players" with a photo of Le Thanh Nhon appears on page 32 of The Sun, Monday September 26, 1777 [ click to open a picture of that article ]. The exhibition was opened by the then president of the Victorian Vietnam Association, Dr Ngyen Dunn, and was hosted by East and West Art, High Street, Armadale.

Nhon passed away at 4 pm on 4 November 2002 at the Royal Melbourne Hospital. His family published a moving tribute in The Age on 7 November 2002.  You can see it here