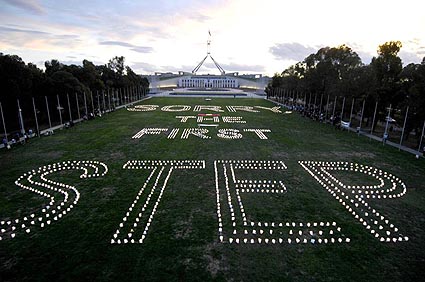 A Field of Candles forms the words "Sorry, The First Step" on the lawn outside Parliament House in Canberra on Monday, February 11, 2008, to commemorate the apology to the stolen generation delivered on February 13. Click here to open a larger version (Photo: Alan Porritt, AAP)

13 February 2008 - On this momentous day, the first day of the Australian Parliament under Kevin Rudd, while the first motion under Government Business was the apology to the Stolen Children Generation, we offer the archive of Indigenous issues writings and events.

There are pages relating to some deaths in custody, to events where Project SafeCom had a supporting role as organisers, and speeches by eminent Australians who spoke out on indigenous issues.

16 June 2009: Elder Mr Ward: Coroner delivers damning findings - West Australian Coroner Alastair Hope delivers his damning report on the death of Indigenous Elder Mr Ward. This page brings together some resources, links, documentation and media items around the release by the WA Coroner of his Inquiry Report into Mr Ward's death on 12 June 2009.

20 March 2009: The Inquest into Mr Ward's death - The damning indictments against Global Solutions Ltd, the company Australia uses to lock up refugees and detainees in immigration detention, the same company that has a contract for prisoner transportation in Western Australia, grew rapidly as the Inquest into Mr Ward's death progressed. This page brings together the media reportage about the inquest.

26 June 2007: Jennifer Martiniello, Howard's New Tampa: Aboriginal Children Overboard - Our Aboriginal communities are being squeezed further into dysfunction and disenfranchisement by carefully targeted political engineering, the systemic and ruthless roll-out of a planned agenda. It is no accident that Howard's scheme to address what he calls the urgency of the Little Children are Sacred report's 97 recommendations was trotted out so very quickly, and addresses so very few of those recommendations.

6 October 2006: The Palm Island Inquest findings: unacceptable political inertia - This is not an issue that should concern only indigenous people. Police should not be permitted to become a law unto themselves ... We are all diminished if we stand by and tolerate a response which shows such a systemic disregard for basic levels of human decency.

15 July 2006: Twenty-five Reports that line government bookshelves ... on Indigenous Australia - Australia already has a complete roadmap to indigenous well-being. Report after report was written, commissioned by governments. The one aspect jumping out and screaming for answers, is the absolute lack of will on the part of the Howard government to build on that roadmap.

15 July 2006: Women in Black on Whitefella business: walking to Canberra - On 11 July 2006, three women started on a journey from Perth to Canberra, and this page contains some of the published information, their message to the Prime Minister John Howard and the Indigenous Affairs Minister Mal Brough, and an open letter to all Australians.

7 December 2004: Palm Island: will Indigenous people get justice for Doomadgee? - "Cameron Doomadgee was found to have suffered four fractured ribs, a ruptured liver and torn protal vein. He died from these injuries he sustained while in police custody on Palm Island. Apparently he sustained these injuries when he fell off a table. Yeah, sure he did."

30 June 2003: Pathway to Residential Hospitality: Common Journey of Healing - Yazdan Jawshani, a refugee from Afghanistan and Indigenous leader Lowitja O'Donoghue have something in common, and not just something. The Journey of Healing for Australian Indigenous people overlaps in many ways with the journey for refugees in Australia.

12 March 2003: It's not unlike the pain of my own people - Lowitja O'Donoghue speaks out: Giving Ruddock the additional 'Indigenous' portfolio is to recognise the racial agenda in Howard's own mind. Aboriginal people and the Stolen Generation have demanded an apology on the basis of racial injustice. And its very hard to see injustices to refugees to be anything other than race motivated.