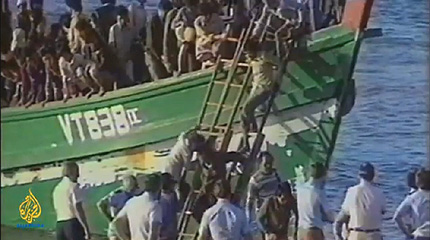 The Darwin landing of the VT838 - On October 5, 1981, the VT838 with 6 crew and 140 passengers sailed into Darwin harbour - the very last of the 'first wave' of Vietnamese boats. Malcolm Fraser and his Immigration Minister Ian Macphee, in collaboration with the Immigration Department, Customs and aided by two Hong Kong police officers flown in for the occasion, swiftly deported all passengers while the media outrage built from Immigration Department informants and statements by Macphee, claiming they were 'economic migrants' and 'bogus refugees', 'too healthy looking' while carrying 'too much money'. To achieve the deportation, Australia's Governor-General hurriedly proclaimed Fraser's "people-smuggling laws", while the Fraser government claimed the organisers were "traffickers". The laws were first proposed by the Immigration Department in 1979.

The Political Origins and Development of Australia's People Smuggling Legislation

By way of a preview, the abstract of the Critical Social Science thesis is also included, as are relevant links to other resources.

The Thesis is part historic in nature, part a Critical Social Science exploration of the crimnalisation of refugee journeys by the Australian State.

This thesis explores the Australian State response to the voyage facilitators of maritime asylum seekers, commonly known as 'people smugglers'. It does so by examining a number of Parliamentary debates and previously confidential Cabinet papers.

Negative depictions of asylum seekers and their voyage facilitators as well as the prevailing political discourse is critically explored while Parliamentary debates are analysed using Critical Discourse Analysis. The research questions the ways Australian legislators justified the criminalisation of these voyage facilitators and investigates whether political elites were sufficiently informed about the circumstances of maritime asylum seeker journeys and the unique nature of their travel arrangements.

The analysis is conducted within the container of established asylum seeker rights as formulated by the United Nations is its 1951 Refugee Convention. Within the Australian context these are framed as the "rights of unauthorised arrivals".

By examining de-classified Fraser government documents, the thesis presents evidence of the State's intent to criminalise 'people smugglers' as part of a two-fold strategy, aiming to also punish maritime asylum seekers for arriving uninvited. This strategy was first proposed under the Fraser government soon after the first asylum seeker vessels arrived in Australia during the late 1970s.

The research findings indicate that the increasingly harsh measures imposed by successive Australian governments targeting smugglers and passengers represents an increasingly punitive and continuous series of policy proposals and parliamentary discourse, where the voyage facilitators became the recipients of criminal labels such as "traffickers" and "smugglers" while 1980 legislative measures determined them to be serious criminals.

The research also analyses legislative measures aiming to impose criminal sanctions implemented by the Howard government in 1999, and legislation that established a wide range of extended powers to Australian border officials in dealing with 'unauthorised' vessels entering Australian waters.

Both legislative measures were responses to a number of undetected entries by vessels with Chinese migrants in the lead-up to the 2000 Sydney Olympic Games. This section of the research explores the dominant "national security" narrative constructed by Australia's conservative political elites in order to justify the legislation criminalising 'people smugglers'.

The research presents documented evidence that the Howard government withheld details of the Chinese arrivals from Parliament for 'operational reasons' and that the Immigration Department attempted to influence political debates by means of distributing a manipulative briefing document in the Parliament. Post-research participant interviews present evidence that Prime Minister John Howard's Immigration Minister Philip Ruddock held the view that nobody has the right, neither by air nor by boat, to enter Australia to seek asylum.

The research concludes that the legislative measures criminalising 'people smugglers' were not presented in order to fight transnational people trafficking but that they were instead presented and passed by the Parliament to 'stop the boats' and to further deter assisted asylum voyages into Australia by regarding such ventures as illegal without due regard for the UN Refugee Convention.