As his Prime Ministership slipped away from him, Australians witnessed Kevin Rudd's tears and excruciating pain.

From Rudd's point of view, this was about the coup by the "Sussex Street Gang", Labor's right-wing faction in New South Wales.

At times holding back the tears, Kevin Rudd told reporters on June 23, 2010 about the impending leadership challenge ballot where his Education Minister and Deputy Leader Julia Gillard would morph into his right-wing raider:

"If I am returned as the leader of the party and the Government and as Prime Minister then I will be very clear about one thing: this party and government will not be lurching to the right on the question of asylum seekers as some have counselled us to do."

The raid on Kevin Rudd was not orchestrated by Julia Gillard, although she was a willing pawn in the ruthless raids by the foolish apparatchiks in the right-wing factions of the Labor Party. Some members of these factions are known to have applauded John Howard and Philip Ruddock's merciless vilification of asylum seekers based on the xenophobic principle that "they are illegal", especially if they arrive by boat. No need to stress that such a view is devoid of any regard to the "rights of unauthorised arrivals" as defined in international law and Article 31 of the UN Refugee Convention.

Julia Gillard came with xenophobic asylum seeker baggage that would predict problems. First there was the "East Timor Solution" where everyone would be "deported" for processing to East Timor. This announcement was accompanied by her vilification of boat arrivals, and the outspoken threat they would all be sent "to the back of the queue" if they dared to arrive on our shores. When that policy collapsed, because East Timor was neither thoroughly consulted nor interested, came the Papua New Guinea Solution - after leaks confirmed that Immigration officials had secretly visited Manus Island on Papua New Guinea.

As boats kept arriving and Labor's insistence on hardline mandatory detention was enforced, a slow detention disaster developed; an ever-increasing rate of self-harm, suicide attempts and actual suicides in detention centres were the barometer of Gillard's immature and callous approach to boat arrivals as implemented by her juvenile stubborn refusenik Immigration Minister - the spin-driven technocrat Chris Bowen.

New detention centres were announced in several locations around the country, and small pockets of xenophobic white Australian racists grouped with Australians furious about the "fake Julia", anxious about the Gillard minority government and damning about her raid on Prime Minister Kevin Rudd: volatile and incendiary local protest meetings were dominated by or stacked with right-wing extremists from Pauline Hanson's One Nation party.

The number of incidents in several centres rapidly increased as people languished in detention for extended periods. A major protest at one of the Christmas Island detention centres escalated into a major riot where Australian Federal Police took charge of the centre's operations. Riot police used guns, shooting at protesting asylum seekers with "bean-bag pellet" bullets. One of several protests at the Villawood detention centre saw a considerable fire and spectacular explosions.

In November 2010 the full High Court ruling of 'the M61 and M69 cases' demanded judicial fairness to all asylum seekers, and it was the first important sign that political and Ministerial powers were subject to limitations - even for the much-maligned "how-dare-they-come-here asylum seekers".

In April 2011 the Gillard government announced its "Malaysian asylum seeker swap" agreement: the next 800 boat passengers arriving in Australia would be "deported" to Malaysia (and according to Gillard, "go to the back of the queue") in exchange for Australia resettling 4,000 assessed refugees over four years from Malaysia. This policy would start with a vessel that had arrived on July 31. However, a High Court challenge resulted in the policy being declared unlawful on August 31.

The government responded by drafting amendments to the 1958 Migration Act to circumvent the High Court ruling so it could proceed with its original agreement. This Bill however was not brought to a vote following fierce opposition by the Greens, the Liberal-National Coalition and Independent MP Tony Crook (Pearce). On 13 October 2011, the Gillard government accepted its defeat. It then announced that all maritime asylum seekers would now be processed "onshore" in Australia, but it insisted that its offshore processing policy and the Malaysian swap agreement would be maintained. 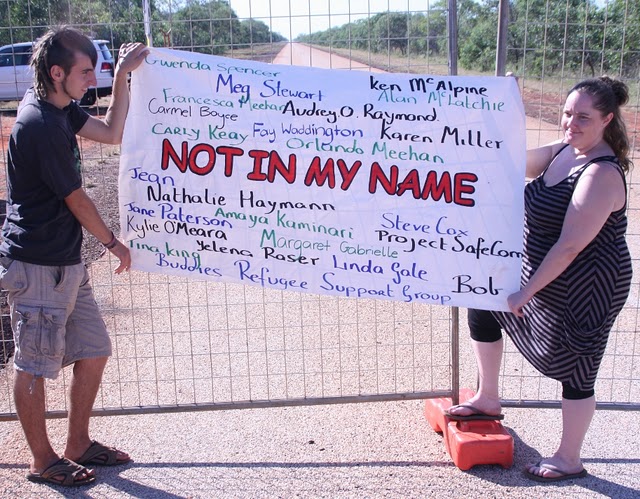 On this page we've brought together a series of cartoons depicting the increasingly desperate political development vis-a-vis asylum seekers by the Gillard government. More often than not cartoonists deliver an uncompromisingly clear message, saying more than words can do. We present these images with many thanks for their ongoing work. The page features cartoonists Ron Tandberg, Jon Kudelka, Andrew Dyson, Alan Moir, Bill Leak and Peter Nicholson.

22 November 2010: High Court demands process fairness for boat refugees - The full High Court ruling of the M61 and M69 cases in November 2010 was a significant reprimand of Australian politicians by the highest court in the land - but before we jump for joy, it's imperative to remember that the proof is in the pudding, and the pudding is prepared in the kitchen of those same politicians.

24 October 2010: Remote Islands and Penal Colonies - Australia's response to boat refugees is marked by dehumanisation, regimentation, incarceration and isolation. The way we respond to those seeking shelter is similar to the way the British expelled thousands of their own unwanted in the 18th Century: those on the First Fleet were sent to the penal colonies on the far-away island of Australia.

5 July 2010: Karzai Solution a dangerous Afghanistan Theatre - PM Julia Gillard may be announcing the Karzai Solution, where in a "pact" with Afghanistan she expects guarantees for safety for Hazaras from the Karzai government. If reports about this are accurate, then the Prime Minister is either dreaming or lying about the prognosis of safety for Hazaras to the Australian electorate. 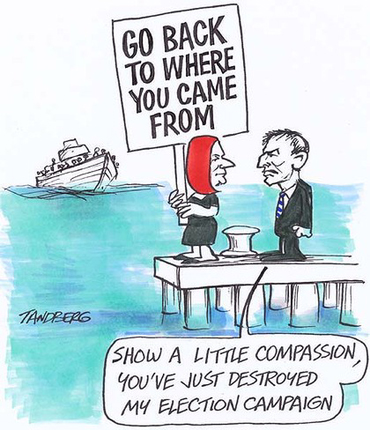 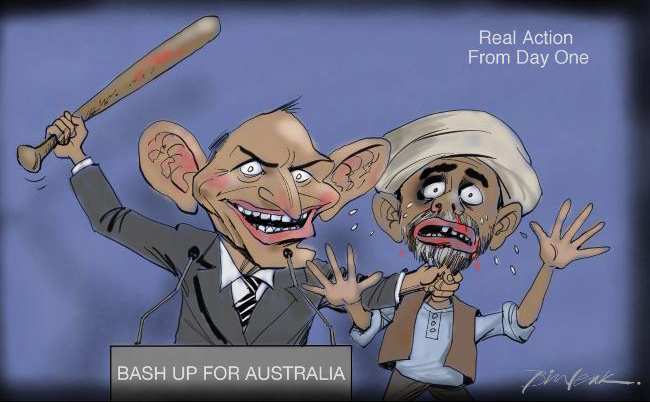 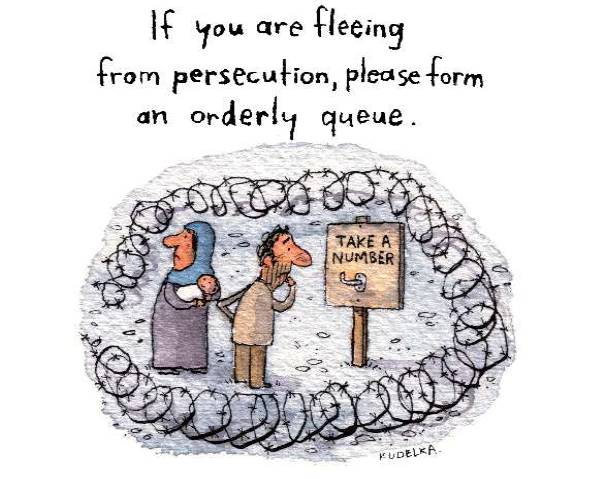 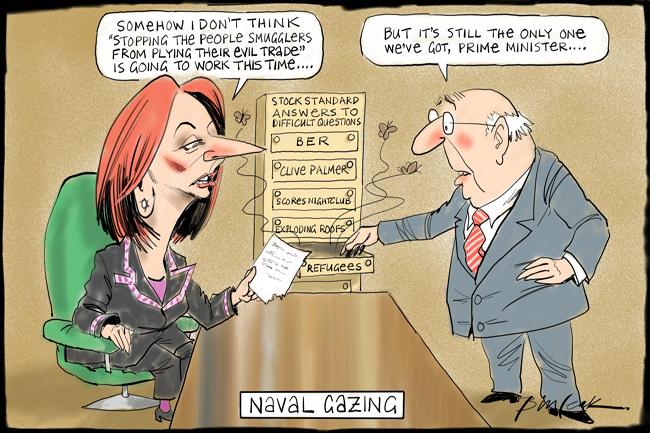 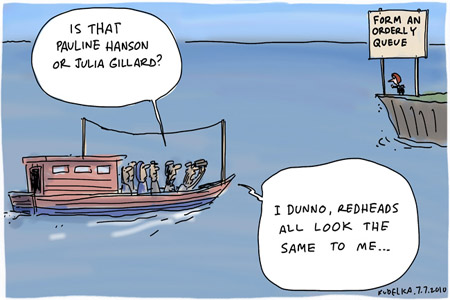 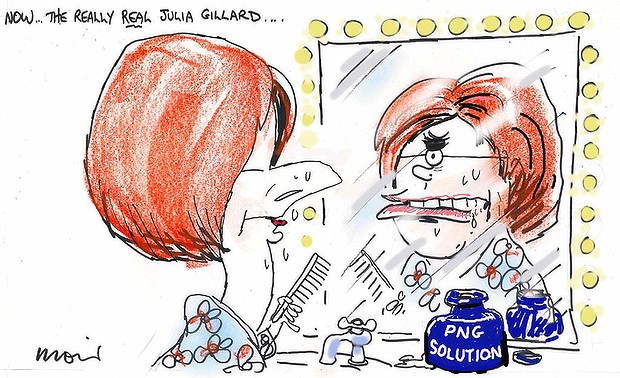 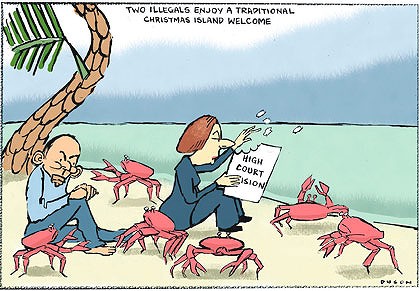 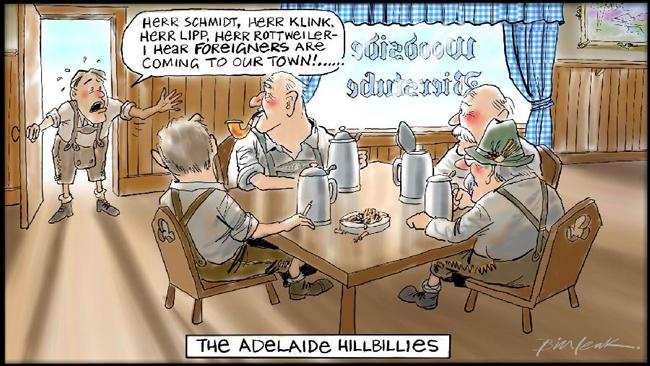 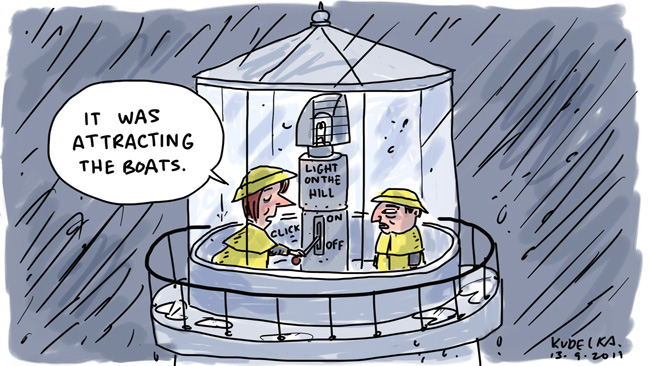 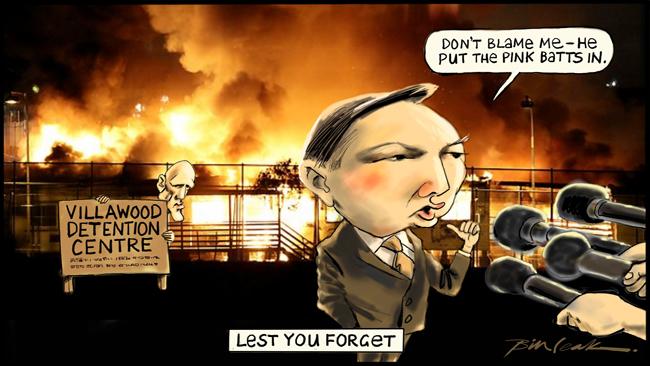 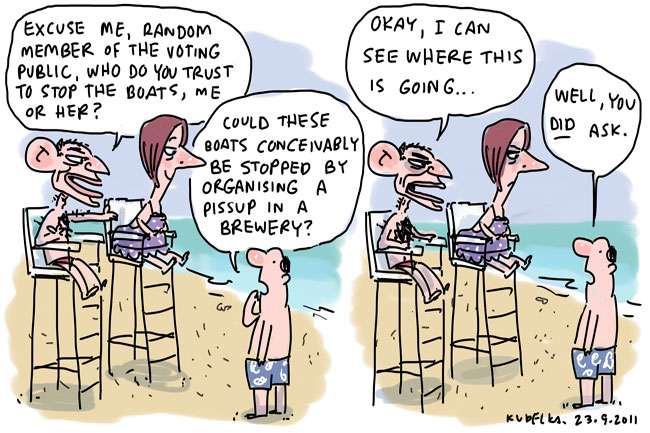 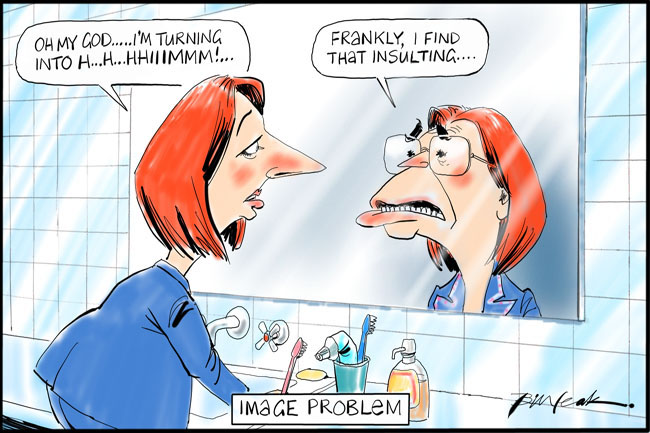 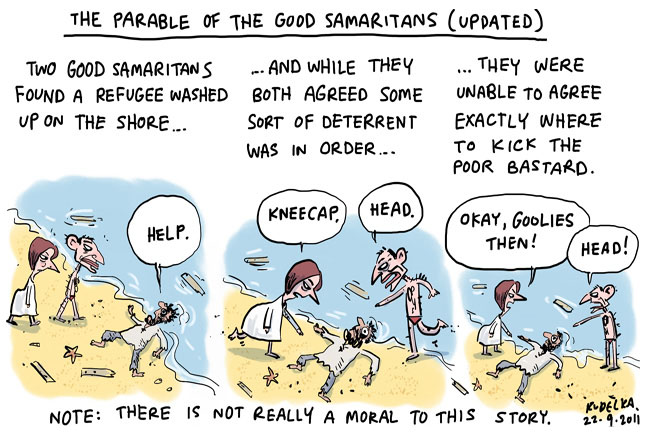 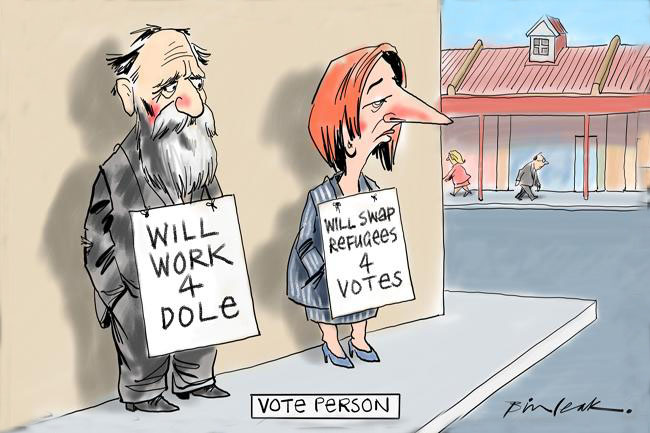 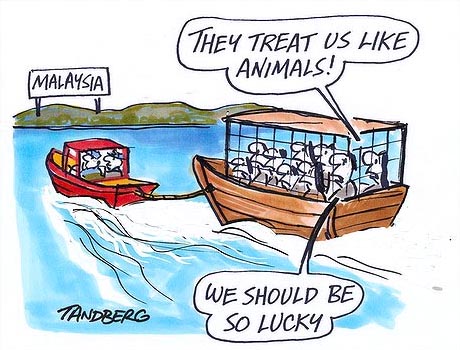 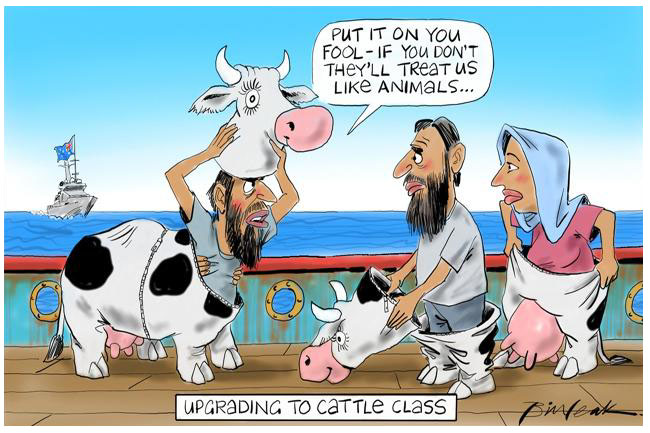 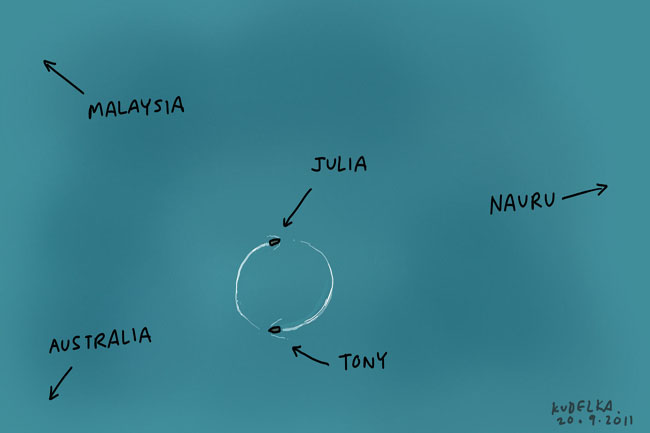 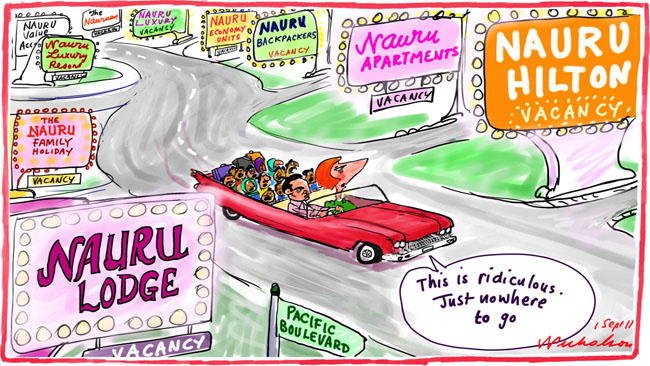 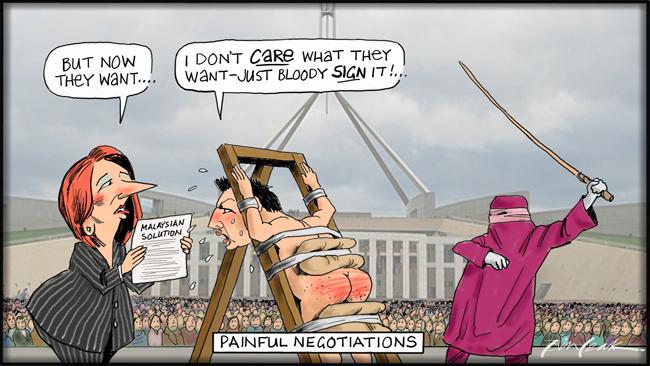 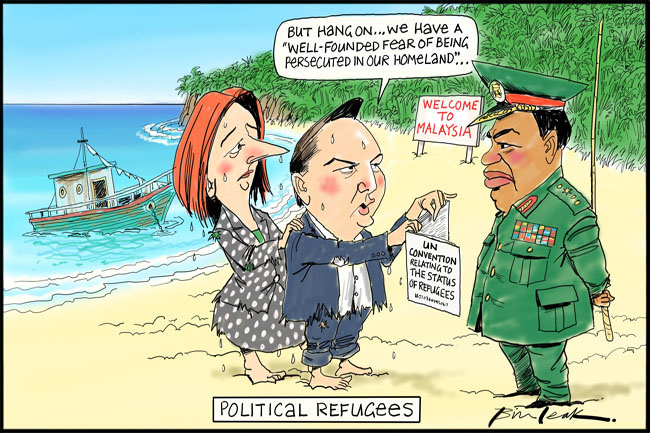 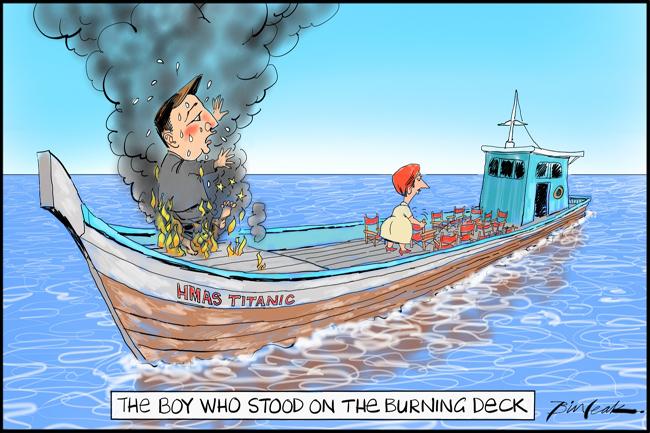 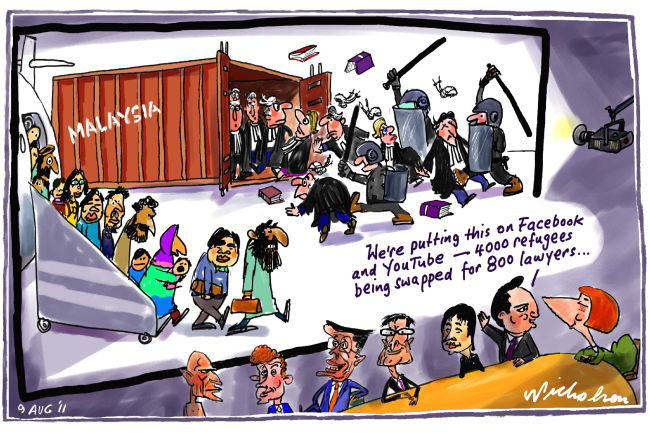 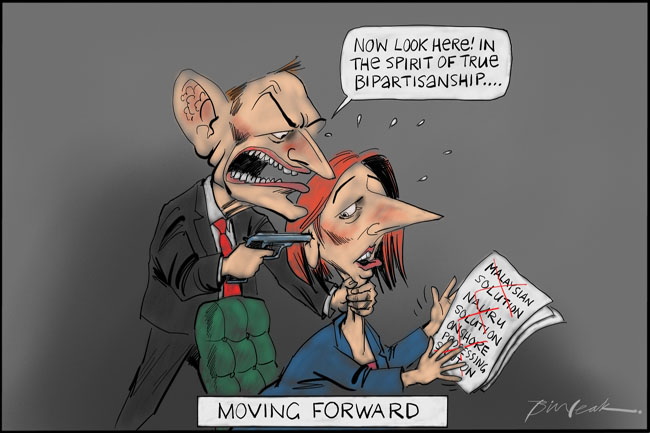 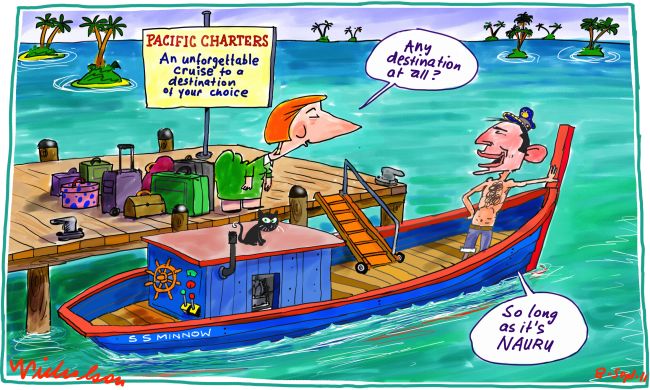 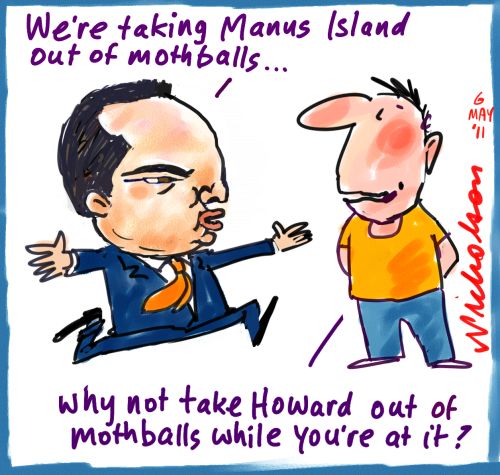 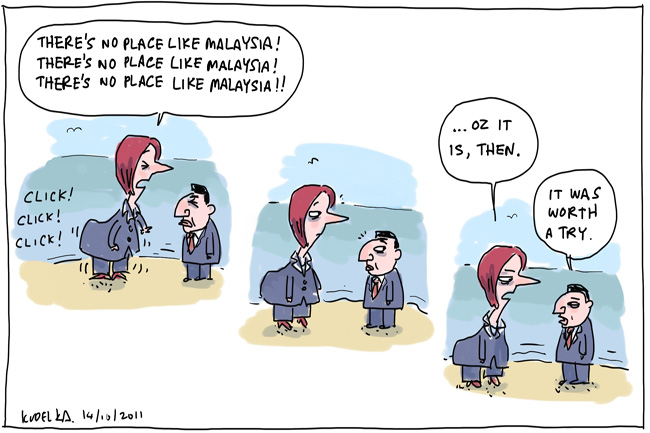 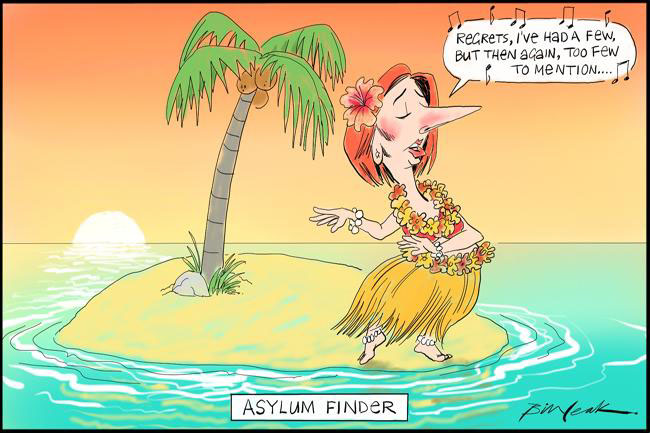 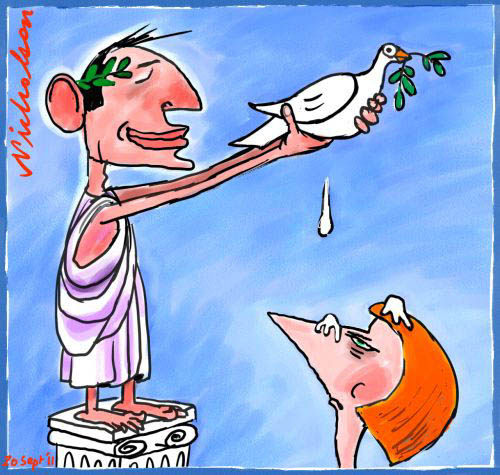