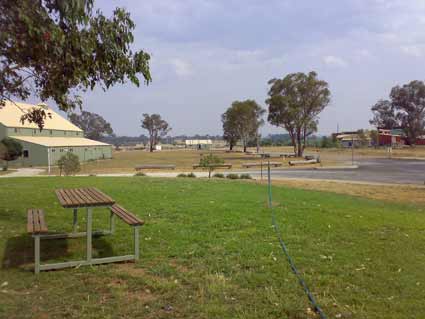 The location of the Mudgee RAR 'Get Together' at the Australian Rural Education Centre (AREC) on Cassilis Road, Mudgee NSW

A presentation by Martin Ferguson MP

It was excruciating for some advocates to remain in the presence of Mr Ferguson when he presented his delivery.

His voice sounded loud and harsh, and at no point he expressed any affection for the advocacy work of Rural Australians for Refugees or any other groups or organisations: it just seemed like he was cheesed off in "having" to do the Labor Party's honours at the Conference.

It wasn't entirely a surprise, because what he had to say represented the right-wing, hardline Labor approach - which really was nothing more than a predictable pandering to the hardline Howard government approach we had heard since 2001. It seemed that Ferguson had swallowed the "xenophobia response" following the 9/11 New York terrorist attacks, and that he had swallowed that hook, line and sinker, and that as a result the political "keeping Australia safe" line was superimposed over asylum seeker and refugee policy.

By the time Ferguson concluded his delivery, almost fifteen people had walked out of the AREC hall, and outside on the lawn a choir chanted "Free The Refugees"...

7 December 2002: Justice for Asylum Seekers Alliance: Reception and Transitional Processing System - Speaking at the Mudgee Rural Australians for Refugees Conference, Grant Mitchell presents an alternative approach to dealing with the processing of asylum seekers for Australia: The Reception and Transitional Processing System provides a realistic, detailed and soon to be costed reform of the immigration detention system which resolves many of the serious problems...

Martin Ferguson is the Shadow Minister for Regional Development, Transport, Infrastructure and Tourism

The policy is a complex package but it is a series of interlocking measures.

In relation to better protecting Australia, the policy details five new important steps that Labor will take. These five steps are:

These five steps are in addition to our recently announced $600 million Australian Coastguard, a cop on the beat 24 hours a day, seven days a week.

Together these initiatives will continue the proud Labor tradition of protecting Australia's borders.

Labor proposes a fairer worldwide refugee system by having the world adopt one processing system for refugee claims.

This is about leadership.

To lead the world requires leading by example. Labor will:

Advocating a new worldwide system is a bold step.

That unique international idea is that the developed world resource UNHCR to undertake refugee determination everywhere.

This would be the ultimate deterrent. There will be no point in moving on from the country of first asylum to another.

We understand that unauthorised boat arrivals are the worst of all possible worlds.

It's the worst of all possible worlds from Australia's perspective in terms of managing our borders.

It's the worst of all possible worlds for the asylum seekers involved, because many fail in the attempt, many die trying to get here in leaky boats.

Labor will keep mandatory detention for the proper purposes of protecting Australia from health and security risks.

Mandatory Detention will also ensure refugee claims can be dealt with efficiently and failed claimants removed.

Under Labor the system of mandatory detention will be humane, not a system of punishment.

Labor will end the "Pacific Solution" because it is costly, unsustainable and wrong as a matter of principle.

Labor has already announced that it will free children from behind the razor wire, close Woomera, return detention centre management to the public sector, and lift the shroud of secrecy around detention centres through media access and the involvement of independent medical professionals.

On Thursday, Labor outlined a number of additional ways it will ensure mandatory detention treats people in an Australian way:

Labor will treat genuine refugees in an Australian way.

There are refugees in Australia who, under current laws, may be here a lifetime but will never be eligible for family reunion.

Labor will not maintain such a system.

The nature of the global refugee problem is changing. In the past refugee status would last a lifetime.

Increasingly, the nature of people displacement is that people have short-term protection needs.

We therefore think it's important to have a first instance Temporary Protection Visa.

At the end of the first TPV we will assess whether anything has changed in the in the country of origin.

If nothing has changed, then their protection needs are ongoing and they will get a Permanent Protection Visa.

Labor will facilitate genuine refugees settling in parts of Australia where they will be welcomed and are needed.

Regional communities that want to increase their population through having refugees settle there will be able to do so through Labor's regional settlement plan and will receive targeted resources to assist them to do so.

Labor will give priority to family reunion applications from those who have settled in the regions of Australia designated as in need of population and with labour shortages.

Labor recognises that the population distribution in Australia is unbalanced.

Too many people live in Sydney and Melbourne.

As a result, there are skills shortages in many parts of Australia.

Communities are finding it difficult to find labour.

Businesses are choosing not to invest outside of Sydney and Melbourne because they find it difficult to attract labour.

It is holding back regional development.

It means that Australia is not reaching its capacity.

It means that some inner city regions are expanding rapidly and many other regions are being left to whither and die.

Labor strongly believes that it is not good enough to let some regions wither and die.

We believe strongly in the notion of one nation - in the positive, inclusive sense.

In this regard, I mean a unified and inclusive society.

One that trusts and supports each other, builds strong and effective networks and partnerships and takes the world head on.

Building our nation, by building our regions both in the city and in the country, will provide what our community expects for them and their families.

It will bring about a better quality of life and increased opportunity.

One piece of the regional development puzzle that Labor is putting together is changing the settling pattern of refugees and new migrants.

Labor supports the dispersal of these people to our country regions.

They will enrich our regions.

I also put it too you that the communities themselves must be ready to embrace a new culture.

But diversity should not be seen in a negative light.

Diversity must be seen as having a positive influence on community building and a legitimate conduit to regional development.

The capacity to ensure regional sustainability relies on a commitment by all tiers of government to regional development.

It also relies on a concerted, whole of government approach to addressing regional needs.

We must extend our thinking to create new social and economic opportunities in regional Australia.

If our regions are going to be able to support migration, it is vital that this agenda is linked with the broader regional development agenda.

Infrastructure development on roads, railways, water provision, energy, housing, schools, hospitals, telecommunications and the like continue to be desperately needed in regional Australia.

It is essential that we employ flexible support programs that ensure such services are available where they are needed, whether that's in the capital cities or the regions.

In other words we must recognise that regional migration is a win-win situation so long as it is applied strategically and properly supported.

I am pleased to have had the opportunity to address you today.

It is a good coincidence that we have announced our asylum seeker and refugee policy just days before I address a gathering of forward thinking regional Australians.