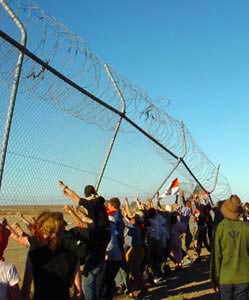 The Seventh of December 2002: Our first birthday

Project SafeCom was incorporated on December the 7th 2001

We have just finished for the year, and we have also celebrated our first birthday. We look back on a year in which we have successfully established ourselves amongst the still growing collection of refugee groups around Australia.

And we commit to growing, developing, working hard and being relevant in the long term as a human rights organisation.

Our Achievements in 2002 include:

And in an Update:

It's many moons later as we write this - to travel further, here are some of our archives for your next choice on the website that now has more than 1,000 pages for your reading!

The call for a Royal Commission into detention and the treatment of refugees, asylum seekers and immigration detainees has always been relevant, especially since the 2001 Tampa stand-off. With Downloadable Petition Form!

The Bill of Rights resources archive

13 February 2008: Archive of Indigenous Issues pages - the number of pages dealing with some aspects of Australia's First Peoples has been growing steadily since we started our work in 2001, so it's appropriate we bring them all together on one page. Here's our archive of Indigenous issues.