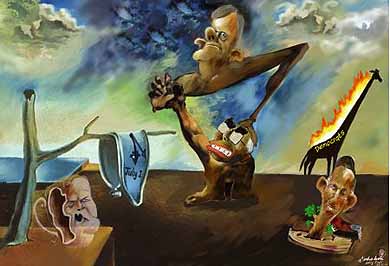 Image: thanks to Peter Nicholson cartoons

The backbenchers' working groups are set to become the true pressure groups within the Australian Parliament, and while the PM may well claim that the coalition holds a majority in both Houses, he should be warned, and so should liberal member Sophie Panopoulos, who called the Georgiou group 'political terrorists', because soon we may see several of these 'terrorist cells' littering the federal political landscape.

When the Federal ALP member for Fremantle Dr Carmen Lawrence resigned from the front bench on December 5, 2002 over her discontent with asylum seeker policies in the ALP, she was admired and supported for this step, but also alone - and ahead of her time.

Two years later - in November 2004, and after an election convincingly lost, fellow ALP Senators and MPs John Faulkner, Antony Albanese, Craig Emerson, Bob McMullan, and Lindsay Tanner came down to join her on the backbench.

All of them are experienced and at times formidable politicians, and they abandoned their front-line positions for very different and stated reasons, but yet, their stepping out was a protest with the Federal Parliamentary ALP or the direction of its leadership. In terms of them "joining" Carmen, it needs noting that at the 2004 National ALP Convention at Darling Harbour, three of the six (Faulkner, Tanner and Albanese) with Dr Lawrence, made up - with Tanya Plibersek - the five sitting MP's who supported further scaling back of mandatory detention as proposed by motions put by Labor for Refugees.

The real reasons for their effort to fill the backbenches and an investigation into why they were using this tactical move as part of a conscious and deliberate but personal strategy has been under-reported by the Australian media. If reporters had gone out on a limb, they could have possibly identified much more precisely what went on in ALP ranks - and they may well have come to understand that wider issues are playing itself out in Australian politics in general.

It seems that shuffling away into the distance of the backbench and working the issues is developing as a strategy in order to get to a position of more power to sway and influence party-politics; perhaps it's a move away from notions of "power" as we understand notions of power in politics, and a move towards another form of power: the power of conscience.

Becoming a backbencher, thus gaining also more freedom for individual approaches and positioning, stands in the context also of encroaching changes in Australian society on other fronts - not just in politics.

Many structures in Australian civil society revolve around large organisations with annual memberships. Examples are the trade unions, the organisations of political parties - and even large traditional churches. The structure of these organisations and their memberships find their origins, broadly speaking, in the organisation of civil and democratic society as it came about since the late nineteenth and early twentieth century. While in days past mass-memberships were popular and personal involvement was high, both as an expression of dissent with the establishment and of older forms of personal activism, these days it means that just once a year a letter arrives by postal mail, urging renewal of membership, and more often than not, that's the end of communication with the rank and file members. Personal involvement and emotional connection is so low that it's almost negligible, and consequently membership numbers are dwindling, in turn catapulting these once trusted organisations into a serious crisis.

Times have changed, and as a result the 'official party secretariats' are in crisis, scrambling to renew their message and their approach to membership recruitment - but more often than not they remain locked into the old approaches and strategies, failing to grasp the solutions which are often displayed right in front of them.

West Australian Liberal Senator David Johnston has indicated he may cross the floor in the next few months over the Industrial Regulations legislation. He's got support from the Nationals, who indicated they might abandon the coalition ranks to go it alone and oppose the Bills. Former Democrat and Independent Meg Lees says goodbye to the Senate while urging MPs to vote with their conscience when the Coalition is set to control both Houses of Parliament after July 1.

In her own words: "It's down now to people within the Liberal Party to stand up and be counted and to vote according to their consciences."

And just two weeks ago, Liberal Senator Judith Trouth indicated she would have been prepared to cross the floor if the two Bills crafted by the Georgiou group dealing with mandatory detention and the treatment of refugees in the community would make it to the Senate.

The ALP's Julia Irwin (Fowler) in her 21 June 2005 speech in reply to John Howard's Migration Amendment (Detention Arrangements) Bill 2005 - the PM's response to the two Private Member's Bills looming upon him by the Georgiou group - revealed what's happening amongst one group of Labor backbenchers:

"There is a small band of Labor members who, it has been suggested, meet secretly at the member for Fremantle's home and plot the invasion of thousands of ships bearing unwashed refugees to our shores - some members would like to think that. As a card-carrying member of that small band, I know how the member for Kooyong feels in his party room."

What's interesting in Ms Irwin's remarks is not necessarily that she uncovers a working group that's likely to work on refugee policy around Carmen Lawrence - because that's something that should not surprise us given the enormous commitment Dr Lawrence has consistently displayed around this issue since her resignation from the front bench - but that she reaches out to the other side of the House, to Petro Georgiou, in a partisan way. In her speech Julia Irwin captures the new phenomenon in Australian Federal politics, where a small group or cell, driven by frustration of and dissent with the status quo in a party's leadership, works - often outside working hours - to build a cause, a strategy, and a way to manifest that strategy: in the case of the Georgiou group resulting in the two Private Member's Bills.

The backbenchers' working groups are set to become the true pressure groups within the Australian Parliament, and while the PM may well claim that the coalition holds a majority in both Houses, he should be warned, and so should liberal member Sophie Panopoulos, who called the Georgiou group 'political terrorists', because soon we may see several of these 'terrorist cells' littering the federal political landscape. And if Julia Irwin's remarks are any indication, the road is also paved for those cells to cross the political divide and develop into cross-party pressure groups, on refugee issues, on Industrial Regulations changes, and on the sale of Telstra, to name a few areas arousing serious concern or due for radical change when Howard claims his absolute majority after July 1.

All we're waiting for, is for Petro Georgiou to turn over the sausages in Carmen Lawrence's backyard while commenting on further inroads into what cannot be but a gentle political transformation of our shocking treatment of refugees.