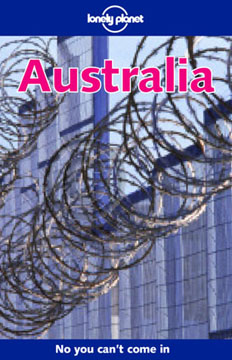 Grace and humour works when politics stops being a joke

Hello and welcome to this page - which tells you in some detail how to prepare a camping trip to the Port Augusta area, more precisely, around the area of the Baxter detention centre.

Since DIMIA and ACM do not provide accommodation for Australian and International tourists and backpackers, you're left to the devices of guy ropes, tent pegs, your water bottle and the gas campstove for your holiday stay when you want to visit our friends in the Baxter detention centre.

Our consultants from "Unusual Tourist Ventures", a Melbourne based company, have prepared this report.

NOTE: a larger version of the images opens in a new window when you click on it.

31 January 2003: Going for Baxter, going for broke - Created while the 2003 Baxter convergence was planned, this is a page, specifically dealing with the Baxter detention centre, the main centre of asylum detainees, with some of our friends having lived inside detention for more than six years, and now well into their seventh year.

31 March 2003: A list of Frequently Asked Questions about Baxter2003 - Many people are again expected to converge on the Baxter detention centre during the Easter weekend in April 2003. Some people comment or indicate doubts as to the usefulness and safety of a protest, and the subsequent impact on those incarcerated inside. These FAQ's formed on the network lists.

The other day I went to Port Augusta to look at camping sites for backpackers and Aussie tourists. These notes tell you what I found there. Others may have additional information. We at "Unusual Tourist Ventures" welcome your comment and suggestions.

These notes will only deal with camping logistics, not with questions like whether you would want to camp close to Baxter or close to Port Augusta, permission from Indigenous owners, etc. Those discussions are important and can be informed, but not determined, by knowledge of the terrain. This report attempts to provide some knowledge of the terrain without pre-judging your precise campsite location. 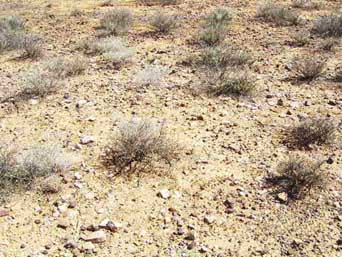 Everywhere in the area the ground is covered, more or less, with low saltbush scrub. Obviously areas with lower, less-dense scrub are preferable for camping. Nevertheless, you could probably manage even in the bushier parts if you need to. Here is a photo of the sort of scrub I am talking about. It is denser along the sides of the road, where it benefits from the water run-off from the road, and is protected from grazing sheep by the fences.

The soil is all fairly loose - with lots of gravely rocks and silty soil. It is quite similar to the ground at other arid parts of South Australia, such as Woomera, but at least while I was there, less dusty.

Tents will need large pegs to hold in this loose soil. Sand pegs would be a good idea.

Port Augusta has a mean daily maximum in April of 25.2° Celcius and a mean daily minimum of 13.4°. On average it gets 19mm of rain in April, with an average of 4.2 rainy days in the month. Of course, there is no guarantee that the weather will be typical while you are there - the lowest recorded minimum temperature for April is 7.8°, so bring your jumper, just in case!

The ground is not uniform. There are some areas that are quite rugged and others that are fairly easy terrain for both camping and marching (eg from the campsite to Baxter). There are little rocks and stones everywhere. If you can get one, it might be a good idea to bring an inflatable mattress. I was going to say a "blow-up" mattress, but realise that could be taken down and used in police media briefings as evidence that campers had brought explosive devices with them! So an inflatable mattress will have to do.

Water is an essential ingredient for camping, and there's none around in this area. Bring a container for drinking and cooking water - you'll want a way to carry some water with you during the day, as well as a supply for cups of tea in the evening - and a bowl or bucket for washing in. There might be a collective water source available, but you'll still need to carry your share to your tent from time to time. 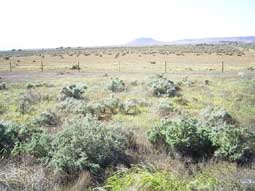 In an environment this dry, of course, there is no firewood to be had, and you have to be extremely careful to avoid the risk of brush fires. The official Fire Danger Season for this area only finishes on 15th April, so you should take a responsible attitude to fire safety. Don't plan on cooking at a campfire. Bring a gas cylinder and gas cooking equipment. Make sure the area around where you cook is well cleared. Don't forget matches for your gas stove.

You might like to consider sharing cooking responsibilities and facilities with some of your fellow campers. Some people are happy to collectivise the work, but this only works if you contribute your share of ingredients and help with the work too. Other campers will prefer their own cooking, and will need to be completely self-sufficient. And every camper will need to bring their own gear - a plate, mug, cutlery and bowl, as well as something to wash up in.

Remember, camp cooking can be quite different from cooking at home. Sometimes it can take quite a while just to boil a pot of water on a small gas burner. Plan ahead by bringing foods that can be prepared fairly easily or eaten uncooked, and you might want a container to soak rice or beans in overnight, that you can seal to keep out the dust and insects.

Speaking of insects, yes there are spiders and bugs resident in this area. You should consider bringing some insect repellent, and keep your footwear handy. 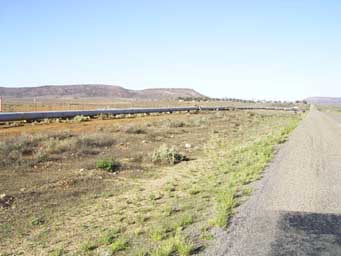 There are farm fences along both sides of the Eyre Highway and the Baxter access road. Along both roads, the area between the road and the fence is fairly broad - up to 20 metres. On the northern side of the access road, the fenced "paddocks" are occupied by sheep.

Along the southern side of the access road is also an above-ground water pipe. In front of the detention centre itself, the pipeline goes underground. The height of the pipeline varies - in some places it is raised on pillars and in others sits very close to the ground. Nevertheless, in most places it can easily be climbed over or under, but there's probably not much reason to do so. It would make a good place to tie up banners and signs, if enough string and gaffer tape was brought along to securely tie things to it, so that you can decorate your camping environment.

The fence on the detention-centre side of the road is the boundary of the military land. In the military area is a firing range, and sometimes they set up carry out military exercises right at the side of the detention centre. Obviously the area is still in active use as a training facility. Must be a great environment for the refugees. Not being able to see what is going on probably doesn't make the sounds of military exercises and a firing range any more comforting!

The hills behind Baxter are all in the fenced military zone. While some might provide good vantage points for viewing the surrounding countryside, they are a long way from the Detention Centre itself, and all are steep and barren.

Mobile phone coverage was reasonably good throughout the area - there were small patches (eg where the road dips behind a slight rise) where the connections dropped out, but no significant gaps, at least for Vodafone and Telstra. I don't know about other carriers.

The two roads both start in Port Augusta, as suburban, settled roads. They are parallel as they pass the Detention Centre, approximately 2 km apart. They converge about 10 km further out of town, when the highway turns south. Traffic on the highway is frequent and fast. It includes some pretty impressive road trains travelling at highway speed.