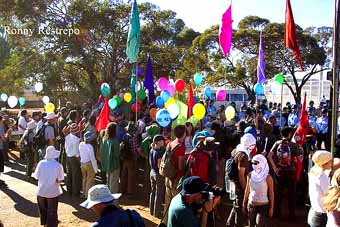 More than anything else, the "2003 Baxter Convergence" was a mass celebration of unity, youth and new energy and a celebration of the directness of 'direct protest', confronting Australia's craven inhumanity vis-a-vis asylum seekers.

Many people, and not just young people or students, or those who are used to organising protests, are again expected to converge on the Baxter detention centre during the Easter weekend in April 2003.

Some people comment or indicate doubts as to the usefulness and safety of a protest, and the subsequent impact on those incarcerated inside. These FAQs formed on the network lists.

Below is the set of FAQs (Frequently Asked Questions) about the event, and a reply to each question. The FAQ's are printed in indented and 'slanted' (cursif, italic) paragraphs.

31 January 2003: Going for Baxter, going for broke - Created while the 2003 Baxter convergence was planned, this is a page, specifically dealing with the Baxter detention centre, the main centre of asylum detainees, with some of our friends having lived inside detention for more than six years, and now well into their seventh year.

1 April 2003: Camping around Port Augusta: a guide to camping and overnighting - Since DIMIA does not provide accommodation for Australian and International tourists and backpackers, you're left to the devices of guy ropes, tent pegs, your water bottle and the gas campstove for your holiday stay. Our consultants from "Unusual Tourist Ventures", a Melbourne based company, have prepared this report (but note the page date).

Detainees in Baxter are grateful to the people who want to show their support, but think it would be better to demonstrate in Canberra or Ruddock's office, because he is the one that needs persuading. Demonstrating in front of the detainees is preaching to the converted. They already know that they are ill-treated.

The actvists going to Baxter have considered tactics carefully. It's well understood that the campaign will not be won by appealing to Ruddock or the Government. The current government is intractable and ideologically committed to the policy. It will only change if they have no choice but to change it. Appealing to them or persuading them has nothing to do with it. If Ruddock is not persuaded by the suffering of innocent unaccompanied minors, what is it that would persuade him? The protests at the remote centres are designed to bring publicity to the issues, international attention, and to make a strong statement by travelling so far.

Many of the detainees are already severely stressed and upset. A noisy demo, especially if there are scuffles or attempts at breaking people out, will tip some of them over the edge and they might do something stupid such as breaking things, hurting themselves or starting fires. That would have terrible consequences for all detainees!

This is one which a lot of people really struggle with. I do - since I know so many people inside, two have been inside for more than four-and-a-half years, one of them will be at Baxter. In the final anlysis, we have to be clear that protests do not create the energy for the incidents you describe. They only sometimes affect the timing. Incidents of fire have not been associated with protests outisde. Most incidents of self harm, and the worst ones, have also not been associated with outside protests.

It is the policy which is the problem, not the protests. What is best for them is for the policy to be overturned. It is not protestors who are making life hard for them, it's our government. This really is an argument which seeks to reverse the blame.

Also, many detainees I know report feeling much better after protests. Reports from psychologists in Woomera indicate an improvement in the mental health of many for a significant period after the protests there last Easter. It not as simple as "protests are bad because there may be incidents with consequences".

Demonstrators go home in the evening feeling good for 'having done something', but it is the detainees who will have to suffer for many weeks, sometimes months afterwards. They may end up being interrogated again by AFP, taken to court, being put into management (a euphemism for solitary confinement), having phones and visits cancelled and adverse reports included in their file. All these consequences severely jeopardize their survival inside and their chances of gaining refugee status.

Well I don't know whose idea it is that demonstrators go home feeling good and that this is their motivation for going to protests. Again, we can't allow the system which is unjust in of itself, to hold people hostage against tactics which we feel are effective and productive and aimed at dismantling that system. That is a really unpleasant call to make, but it does boil down to that.

As for affecting their visa chances, well the biggest problem there is the system itself, not with anyone doing unreasonable things to provoke that response from the system. All of the consequences you mention are happening all of the time even without protests. It is overwhelmingly the case that protests don't create these consequences, they just sometimes affect the timing.

In every demonstration there are some hot-heads who will get into fights with the police. And, of course, that is what the media will show. So instead of increasing public support, it will have the opposite effect.

This is a poor argument, not supported by my experience. Any incidents of this sort do show the protestors in a bad light, but this does not automatically cross over to the issue. A show of strong opposition to the policy is important in undermining the appearance of public agreement with it and the goverment's strength.

A demo while there is a war with a Muslim country will only harden public opinion and it wouldn't even get much media coverage because everybody is focussing attention on Iraq.

This is a poor argument. Was it really put by the detainees you know? Being also involved in the anti-war campaign, we are successfully highlighting the additional injustices and hypocracies of our government by pointing out that we are at war with a dictator supposedly to save the Iraqi people, but if they liberate themselves and come here, we lock them up. This is an argument which has been well received at the anti-war rallies which I've been helping organise.

My friends at Baxter whose compound has a fence at one side so they can see out, tell me that there is already a considerable police contingent being trained for the Easter demos. THEY ARE AFRAID. Please don't make life harder for them. Go and demonstrate at the DIMIA offices in Canberra, or at Ruddock's electoral office where he will be during the Easter parliamentary break or anywhere EXCEPT BAXTER! Think about what is best for the long-suffering Detainees, PLEASE!

People are genuinely interested in their welfare. Why else would we put in an enormous effort and drive thousands of kilometres to go to a protest if we could go to one just down the road? I know detainees who have drawn a huge amount of strength and comfort from protests. There are always going to be differences in opinion and experience about protests. But what the best tactics are is what is informing and driving the protests at Baxter.

People would be interesed to hear the detainees' word on this. So far all the first and second hand information that I have from people I personally know is in favour of the protests. The only arguments against has been second hand from people who I don't know personally.

If you can provide a position from detainees in their words, people would be interested to hear that. I know there are some ideas about to avoid any actions adjacent to the family compound because reports indicate that some of the families are concerned.

As someone who knows many detainees and has a close personal relationship with several, as someone who has been immersed in the campaign for mmore than two years, as someone who's life has been basically taken over by this issue, let me assure you that the people going to Baxter understand and consider the points you have outlined. I think that most of them are either wrong or outweighed by broader considerations. That is not a pleasant thing to say or to act upon.

We have to understand that we are opposing a government policy which the government is intractably and ideologically committed to. They are willing to use racism, xenophobia, billions of dollars and the most extreme military force to support it. That is the reality we face.

The Baxter convergence is designed to be a strong statement against the policy. Believe me, we'd all prefer to find that it was a statement that was not required.

Message from
a Baxter convergence traveller

Why I will go to Baxter at Easter

In September 2001, just after 'that incident' in America, when nobody knew or gave a rat's arse about refugees, I went to Woomera with 200 protestors from Melbourne and 50 from Sydney.

The bus ride there was very excited and energetic. We were going to visit the detainees. We had prezzies for them; clothes, toys, soccer balls, lollies and whatnot. But we were prevented from even getting closer than 200 metres from the camp.

Furthermore, when a group of detainees got on the roof so they could wave to us, they were teargassed. As far as I could see with my cheap binoculars they were doing F all to deserve that. It's my firm belief that ACM turned that spectacle on in order to make us supporters wild and uncontrollable, so we could then be blamed because we were ratbags. Divide and Rule, it's called, or Wedge Politics. Interesting, we were not the only ones who were traumatised. The burden of witness fell too on the SA coppers, who, to their credit, were also choked and distressed-looking. (Pussy cats they are, actually, and quite sweet compared with the neanderthals in Melbourne who once nearly ripped my effing arms out)

Needless to say, the return journey was quite different. The ride back to Adelaide that night was a very solemn affair indeed. The entire 200 of us from Melbourne (and presumbly also the good souls from Sydney) returned with very long faces. I was in a state of terrible shock.

Me, wizened old Grace, from the School of Hard Knocks ... Just thinking about it now makes me want to cry again. When I got back to Melbourne it took me several days to stop bursting into tears every couple of hours. At RAC the following Tuesday we had a de-brief. Thank God I turned out to be completely normal. Approximately 80 people at that de-brief reported exactly the same unpredictable crying bouts and inability to concentrate. Serious psychological trauma we are talking about here, not "going home feeling good about ourselves".

Further, to witness such a horrible event as that, and then to have salt rubbed in the wound when mainstream media distorted or totally ignored it, only made me determined to fight harder.

In the land of footy, sunshine, "Throw another shrimp on the barbie" and "She'll be right, mate," we have a problem, not just of human rights abuse but of systemic denial, lies, obfuscation, and outright fraud and deception.

What comes with knowing all the above is a heavy responsibility to share the information, but I am mature enough to take it on. While all the above happens on my front door, if I sit on my toosh and suck my thumb, I will lose my self-respect, and I have no intention of letting that happen. I have worked hard to achieve self-respect. It's too valuable to throw away. So, in other words, I am not just fighting for the release of these poor sods in detention. I am also fighting for my own quality of life. Refugees today, you and me tomorrow.