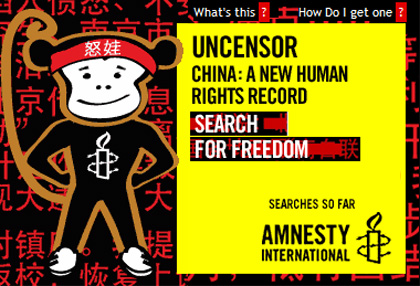 Our website is a free expression of dissent, unlike many websites in China

Nu Wa's name creates an association with the "Fuwa", the five official mascots of the Beijing Olympics. Fuwa means "The Friendlies". Their overly happy and cute demeanor defies the worsening human rights situation inside China today. Nu Wa wants to set the record straight by speaking about the human rights abuses suffered by people in China.

This page supports the Amnesty International Australia "Uncensor" campaign (now deleted), highlighting human rights abuses in China in the lead-up to the 2008 Beijing Olympics. The Amnesty "Uncensor" campaign website is now deleted, but we have left this page in place. It concludes with an opinion piece by author and journalist Antony Loewenstein, who was one of Amnesty's main supporters during the campaign period.

Be part of Amnesty's direct action!

The "image" on top of the page contains a "search box" with some predefined terms, such as "Tiananmen".

If you do a search using this search box, a page of the Uncensor campaign website opens - but, more interestingly, inside that page a window with the Yahoo!-China search results (ie from the Yahoo! website in China) will show.

This is a form of Direct Action by Amnesty International Australia: the more people do the search for the (censored by Yahoo!) pre-set search terms, the more Yahoo! is under pressure, because their customers (you!) want them to deliver, while at the same time their censorship of the Yahoo! search results is exposed.

For example, if you do a search for one of the terms, SARS (the epidemic), the Chinese Yahoo! image search results show many good-looking chinese-made vehicles, deliberately misreading your search term SARS and returning a result for CARS ... but nothing about the epidemic!

Nu Wa's favorite accessory, a red bandana, was worn by many during the Tiananmen Square crackdown in 1989.

Gagged by his own bandana, Nu Wa symbolises the silencing of Chinese human rights defenders who are imprisoned or otherwise detained.

Nu Wa's broken heart symbolises the grief and suffering of families and individuals affected by human rights abuse in China, and sadness that the Government is not enacting the reforms it has promised.

Human rights in China: The facts

Expressing your opinion in China can result in jail, torture or death. People are silenced and what happens in China is clouded in secrecy.

Restricting the internet helps the Chinese Government to hide the true extent of human rights abuses like the death penalty, torture and detention without trial and the persecution of human rights defenders. We believe that transparency is essential to create a society that upholds basic human rights.

What is internet censorship?

Who is affected by internet censorship?

Internet censorship affects everyone. Environmental activists, HIV lobbyists, human rights supporters, bloggers with opinions. These people and more are all denied freedom of expression in China.

The death penalty in China

Each year China executes hundreds of people, more than any other single country. Among the victims are people like Nie Shubin, a young farmer, who was put to death for a murder to which someone else later confessed.

Torture and detention without trial

Imagine being locked away for years, yet you've never been charged with a crime nor spoken to a lawyer - in China it happens to thousands of people every year.

Human rights defenders aren't usually world leaders or global figures. Mostly they're ordinary people who're willing to stand up for what they believe is right. They can be journalists, healthcare workers, lawyers, grieving parents, they can be anyone.

Experts believe China has the most extensive, technologically sophisticated and broad-reaching Internet filtering system in the world. The major overseas Internet companies operating there have, in one way or another, facilitated or colluded in the Government's censorship practices.

China has made big promises about how the Olympics will improve human rights - now it's time to deliver.

Should the Olympics be being held in China? Does the International Olympic Committee have a duty to help China improve its human rights record?

China is the world's most populous country, and the Beijing Summer Olympic Games are a chance for it to showcase itself in the world spotlight.

Inside China people are persecuted and imprisoned for their religious and spiritual beliefs; rural migrants are deprived of their basic rights; families are forced from their homes without compensation; and ethnic groups are harassed and silenced.

Expressing your opinion in China can result in jail, torture and death. Peaceful human rights defenders have had their phones tapped, homes raided, assets frozen and sometimes even their family and friends have been harassed. Some activists are tortured in secret detention centres, others are executed for vague crimes. It's hard to gauge the full extent of the persecution because of the secrecy that shrouds China.

Amnesty International is focusing on a number of case studies. Read their stories.

Uncensor Weekly report: The disaster that opened the door

Antony Loewenstein is a Sydney-based journalist, blogger and author of the forthcoming book, The Blogging Revolution. He is a regular writer for the Uncensor campaign. Here are some of his articles about human rights in China.

The Sichuan earthquake may have largely fallen off the Western media’s radar but the Chinese people remain focused on the disaster.

A number of bloggers are proving that robust debate is increasingly possible, even for aggrieved parents whose children were killed. Many have been denied the chance to mourn their loss and challenge corrupt building practices in the courts. One cultural critic was even accused of “brown-nosing” the authorities.

The rapid rise of NGOs and their services will not be quickly quashed. A growing number of Chinese citizens are demanding rights that were unimaginable barely a few months ago.

Chinese soldiers have been brought in to fire missiles into boulders and clear the way for a channel to drain the precarious Tangjiashan lake, the bulging body of water in Sichuan province that threatens 1.3 million quake-affected people living downstream. Sadly, the International Federation of Journalists reports that the regime is again imposing draconian media conditions in the disaster zone after a period of relative openness. Old habits die hard.

“For three days last month, China’s national flag flew at half-staff in Tiananmen Square to honour the victims of the devastating earthquake in Sichuan. It was the first time in memory that China has publicly commemorated the deaths of ordinary civilians.

“Crowds were allowed to gather in the square to express sympathy for their compatriots. Despite a death toll that has risen to nearly 70,000, the earthquake has shaken the nation back to life. The Chinese people have rushed to donate blood and money and join the rescue efforts. They have rediscovered their civic responsibility and compassion.”

This outpouring of grief was sharply contrasted with the ways in which the regime managed the 1989 Tiananmen massacre. “Even as doctors were caring for students hurt in the melee”, Ma Jian argues, “The party was rewriting history.”

If Beijing is expecting a smoother PR ride in the months before August, it will be sorely disappointed. Mobile phones are becoming even more popular than the internet to spread news and views and the regime has no major techniques to manage it.

Although few citizens are openly critical of the Games itself, it’s dismaying to read the support offered by the Bush administration for security. Washington has approved the export of “sensitive” equipment and expertise to the regime, despite the Export Administration Act specifically stating the illegality of doing so. Like America providing arms to Israel, America’s supposed concern for human rights always comes after the chance for corporations to make money.

But the situation in China isn’t entirely hopeless. A recent feature article by the Atlantic’s James Fallows on the country’s pollution problems highlights the positive steps being taken by Beijing. Massive issues remain, but Fallows reveals the growing number of officials who recognise they must take drastic action to alleviate the rapid rise of industrialisation:

“The rule of law is still shaky in China, but Chinese environmental lawyers have filed and sometimes won suits on behalf of citizens who are sick because of pollution or whose farms have been poisoned. A former journalist named Ma Jun has created the remarkable online “China Water Pollution Map” for his Beijing-based group, the Institute of Public and Environmental Affairs. Anyone using the Internet can zoom in on a city or village, click on a lake or river, and see the latest pollution readings—and also which factories or farms are creating the problem.

“Jane Goodall’s organization has started “Roots & Shoots” programs to teach Chinese children about environmental problems. Early this year, thousands of people poured into the streets of Shanghai to protest the downtown extension of a Maglev train line, which they believed would give off dangerous radiation near their homes. There was a similar mass protest last year about factory pollution in the coastal manufacturing town of Xiamen.”

The issue of challenging state propaganda and media bias is central if China is to react less defensively when provoked by the West. Of course, Americans, Australians and Europeans are rarely better at hearing criticisms, either.