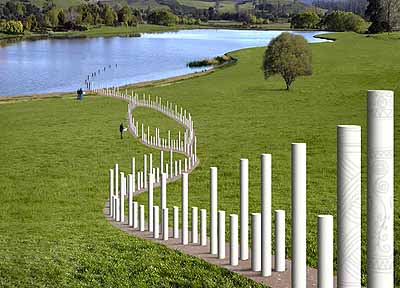 The SIEV X Landmark of Conscience

We shouldn't have worried, again the applause spoke for itself. When the evening ended, senators, members of the ACT assembly, officials from museums and planning authorities, and most importantly the refugees themselves, all expressed the same view. Its beautiful. Its fitting. You must build it.

The SIEV X Landmark of Conscience is born

Into the whisper quiet Canberrra City Uniting Church there came a sudden tidal flow of people, noise, news cameras and journalists, senators rubbing shoulders with people in headscarfs, refugee children and babies running amongst the legs and feet, and musicians setting up amps and guitars. The pews filled with a most unchurchish crowd, and there was a moment of waiting.

Jon Stanhope the ACT Chief Minister opened the evening, and right away we entered some kind of altered space. He made passing remarks about his recent role in making public the new terror laws, and the audience erupted. They simply wouldn't stop clapping, and Jon Stanhope, pleased but somewhat embarrassed, eventually had to wave them to stop. Message received.

The Bloody McKennas, youthful musicians who had come from Brisbane just that day to sing their powerful anthem Time and Tide, were clearly affected by the moment, as they sang the bandmembers and some in the audience were already blinking back tears.

The mood of earlier SIEVX events was changing to resolve, you could feel it in the room. Amal Basry, the indomitable Iraqi woman survivor, told the story of the people on the boat. By way of answer, the Chorus of Women - a unique choir that could probably call down brimstone from the skies, sang hauntingly in apology straight to the faces of the five survivors and their family members, who had come from all over Australia to be there. Elders of the Islamic community nodded in gruff approval.

Co-ordinator Beth Gibbings, who had worked three years for this moment, then brought out of the shadows a huge computer altered image of the lakeshore in Canberra, on which was the planned memorial structure. The audience literally gasped. As someone prone to thinking the worst, I assumed it was not positive. Beth and I spoke hesitantly about the procession of white poles, each panelled with community art from communities all over the country, each honouring a single parent or child from SIEVX. The poles emerge from the water, suddenly diverge to show the outline of the boat, exactly in its 19.5 by 4 metre dimensions, then rejoin and continue to snake over the hills for almost 200 metres. 353 people is a lot of people.

We shouldn't have worried, again the applause spoke for itself. When the evening ended, senators, members of the ACT assembly, officials from museums and planning authorities, and most importantly the refugees themselves, all expressed the same view. Its beautiful. Its fitting. You must build it.

The confusing flurry of inaccurate news items about it 'not being allowed to be built' have dissolved. The concept has registered. A "Landmark of Conscience" is more than a memorial - its a way for church groups, RAR groups, school students, refugees themselves and notable artists, all to show their outrage and their remorse that as a country we let this, and all the terrible mistreatment of people in the last four years, to happen at all. Graceful white poles inlaid with beautiful community art will flow across the country to Canberra next year, to be stood up in remembrance.

The SIEVX memorial has evolved to be a statement of intent, that this country will grow, up, it will face its horrible mistakes squarely, and take responsibility. For this is the only way things can change.

Steve Biddulph is a men's issues writer and the founder of the SIEVX Memorial Project.

FOUR years ago Bahja Hassan lost an uncle, his wife and their five children, aged four to 11, when the SIEV X sank.

Ms Hassan, who was born in Iraq and now lives in Whittlesea, is in no doubt over who is to blame for her loss.

"I blame the Australian Navy and the Indonesian smugglers for their deaths," she said yesterday, at the commemoration of a memorial for the 353 asylum seekers who lost their lives when the boat sank.

A Melbourne Islamic leader yesterday challenged the Australian Navy to explain why it didn't go to the rescue of the SIEV X as the vessel, overloaded with people, started taking water.

Sheikh Issa, from the Islamic Council of Victoria, said he understood the vessel sank close to Australian waters where the Australian Navy was operating.

"So if there was a willingness to save them, that could have been done.

"We remember how there was a ship called Tampa. That ship saved a lot of people," he said, referring to the Norwegian ship that rescued 433 asylum seekers a month earlier.

"Why was the Tampa path not emulated by the Australian Navy?"

The tragedy should be highlighted in international forums, he said. "The refugees have every right to be taken care of."

He said nearly all the victims were Muslims, mainly from "wrecked countries" such as Iraq. "The community is very disappointed at this tragedy and the lack of response from the Government. They did not show any sympathy."

At a simple ceremony in the Flagstaff Gardens, he read from the Koran and said "in Islamic literature, we call such people martyrs because they were coming for noble ideas - to have a better life for their families."

Sheikh Issa also called on the Australian Federal Police to relent on their refusal to release the names of the dead. "People say there is this number 353 but why are they kept nameless?" he said.

He proposed their names be recorded on a memorial for relatives to see.

A spokesman for Defence Minister Robert Hill referred to the Select Committee on a Certain Maritime Incident report, which found extensive maritime surveillance on Australia's northern approaches was under way at the time.

On October 19, 2001, the helicopter from HMAS Arunta was assigned to searching an area where the SIEV X survivors were waiting for help, but turned back after running low on fuel.

In a letter in today's Age, the Executive Director of the Australian Defence Association, Neil James, rebuts claims made in the newspaper yesterday that the Navy bears some responsibility for the SIEVX tragedy.

The curious thing about James' letter is that while he states that SIEVX went down in 'Indonesian waters' he actually gives a location - ie 'about 70 kilometres south of Java' - which is in international waters and within the Operation Relex border protection surveillance zone! This figure is similar to one Don Greenlees gave in an article in the Australian back in 2001 soon after the sinking.

Earlier this year we had Ministers Vanstone and Ellison making public statements (which they later retracted) that SIEVX sank in 'international waters'. Now we have the Executive Director of a Defence watchdog organisation saying the same thing. Government Ministers and Directors of organisations associated with Australian Defence don't pull figures out of thin air. It is apparent that far from the sinking position being 'unknown' and at best 'speculative' as claimed by the Defence Review of Intelligence on SIEVX, there exists authoritative data held by the government (persuasive enough to initially convince Ellison, Vanstone and James of its provenance) that shows that SIEVX sank exactly where we claim it sank - inside the Operation Relex surveillance zone.

It will be interesting to see if Neil James follows Vanstone and Ellison's lead and retracts or amends his statement regarding the sinking location.

THE Islamic Council of Victoria's Sheikh Issa owes the Royal Australian Navy an apology for his calumny that the navy was somehow involved in the 2001 sinking of SIEV X ( The Age, 20/10).

This old and leaky Indonesian fishing vessel was grossly overloaded at gunpoint by Iraqi, Egyptian and Indonesian people smugglers and subsequently sank during a storm in what has always been regarded as geographically Indonesian waters about 70 kilometres south of Java. The sinking occurred more than 2200 kilometres from mainland Australia and some 350 kilometres from the nearest Australian territory of Christmas Island. As the subsequent Senate inquiry revealed, the nearest Australian warships and aircraft were hundreds of kilometres away during and after the sinking. The RAN had no way of knowing of the tragedy but obviously would have helped if it had known and could have assisted.

The grief of SIEV X survivor Bahja Hassan is understandable, but blaming the RAN is simple psychological transference with no factual foundation and will not help resolution of her grief.