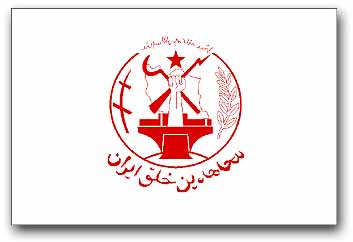 "The fall of Saddam Hussein's regime affected the circumstances of the designated foreign terrorist organization Mujahedin-e Khalq (MEK). The MEK was allied with the Iraqi regime and received most of its support from it."

"The MEK assisted the Hussein regime in suppressing opposition within Iraq, and performed internal security for the Iraqi regime. The National Liberation Army was the military wing of the National Council of Resistance of Iran."

The MEK is associated with or also known as:

The fall of Saddam Hussein's regime affected the circumstances of the designated foreign terrorist organization Mujahedin-e Khalq (MEK). The MEK was allied with the Iraqi regime and received most of its support from it. The MEK assisted the Hussein regime in suppressing opposition within Iraq, and performed internal security for the Iraqi regime. The National Liberation Army was the military wing of the National Council of Resistance of Iran.

On 10 May 2003 V Corps accepted the voluntary consolidation of the Mujahedin-E-Khalq's forces, and subsequent control over those forces. This process is expected to take several days to complete. Previously, V Corps was monitoring a cease-fire brokered between the MEK and Special Forces elements. The MEK forces had been abiding by the terms of this agreement and are cooperating with Coalition soldiers.

By mid-May 2003 Coalition forces had consolidated 2,139 tanks, armored personnel carriers, artillery pieces, air defense artillery pieces and miscellaneous vehicles formerly in the possession of the Mujahedin-E Khalq (MEK) forces. The 4th Infantry Division also reported they have destroyed most of the MEK munitions and caches. The voluntary, peaceful resolution of this process by the MEK and the Coalition significantly contributed to the Coalition's mission to establish a safe and secure environment for the people of Iraq. The 4,000 MEK members in the Camp Ashraf former Mujahedeen base were consolidated, detained, disarmed and were screened for any past terrorist acts.

The United States, which lists National Council of Resistance of Iran as a terrorist organization, closed the NCRI's Washington office in 2003.

Mujahedeen-e-Khalq (MEK) is the largest and most militant group opposed to the Islamic Republic of Iran. Also known as the People's Mujahedeen Organization of Iran, MEK is led by husband and wife Massoud and Maryam Rajavi. MEK was added to the U.S. State Department's list of foreign terrorist groups in 1997.

MEK was founded in the 1960s by a group of college-educated Iranian leftists opposed to the country's pro-Western ruler, Shah Mohammad Reza Pahlavi. Although the group took part in the 1979 Islamic revolution that replaced the shah with a Shiite Islamist regime, MEK's ideology, a blend of Marxism and Islamism, put it at odds with the postrevolutionary government. In 1981, the group was driven from its bases on the Iran-Iraq border and resettled in Paris, where it began supporting Iraq in its eight-year war against Khomeini's Iran. In 1986, MEK moved its headquarters to Iraq where it received its primary support to attack the regime in Iran. During the 2003 Iraq war, U.S. forces cracked down on MEK's bases in Iraq, and in June 2003 French authorities raided an MEK compound outside Paris and arrested 160 people, including Maryam Rajavi.

The group has targeted Iranian government officials and government facilities in Iran and abroad; during the 1970s, it attacked Americans in Iran. While the group says it does not intentionally target civilians, it has often risked civilian casualties. It routinely aims its attacks at government buildings in crowded cities. MEK terrorism has declined since late 2001. Incidents linked to the group include:

In the early 1970s, angered by U.S. support for the pro-Western shah, MEK members killed several U.S. soldiers and civilians working on defense projects in Iran. Some experts say the attack may have been the work of a Maoist splinter faction operating beyond the Rajavi leadership's control. MEK members also supported the 1979 takeover of the U.S. Embassy in Tehran, in which 52 Americans were held hostage for 444 days.

MEK is believed to have several thousand members, one-third to one-half of whom are fighters. MEK activities have dropped off in recent years as its membership has dwindled.

The group's armed unit operated from camps in Iraq near the Iran border since 1986. During the Iraq war, U.S. troops disarmed MEK and posted guards at its bases. In addition to its Paris-based members, MEK has a network of sympathizers in Europe, the United States, and Canada. The group's political arm, the National Council of Resistance of Iran, maintains offices in several capitals, including Washington, D.C.

When Saddam Hussein was in power, MEK received the majority of its financial support from the Iraqi regime. It also used front organizations, such as the Muslim Iranian Student's Society, to collect money from expatriate Iranians and others, according to the State Department's counterterrorism office.

Maryam Rajavi is MEK's principal leader; her husband, Massoud Rajavi, heads up the group's military forces. Maryam Rajavi, born in 1953 to an upper-middleclass Iranian family, joined MEK as a student in Tehran in the early 1970s. After relocating with the group to Paris in 1981, she was elected its joint leader and later became deputy commander-in-chief of its armed wing. Massoud Rajavi was last known to be living in Iraq, but authorities aren't certain of his whereabouts or whether he is alive.

The United States has granted protected status under the Geneva Convention to almost 4,000 members of the exiled Iranian armed opposition group, the People's Mujahedeen.

American officials are trying to play down this move and deny that it is contradictory.

For years, the People's Mujahedeen, or Mujahedeen-e-Khalq, was the main Iranian opposition group. It carried out cross-border raids from Iraq. Some 3,800 members have been disarmed by the US military after it invaded Iraq. They are being held at a camp north-east of Baghdad.

Now the United States says that they have been granted protected status under the fourth Geneva Convention. But this, it argues, simply reflects the fact that they were not direct belligerents in the conflict in Iraq.

What will ultimately happen to these people is not clear. The US says it is working with the Iraqi Government and international organisations on this. Previously, the Iraq authorities have said they want them expelled.

Surprise at US protection of MKO

The US occupation has granted "protected status" under the Geneva Convention to members of an exiled Iranian opposition group interned in Iraq, France-based opponents of Tehran said in a statement.

The US head of detainee operations in Iraq, Major-General Geoffrey Miller, told the Mujahideen Khalq Organisation (MKO) its members held at a base in eastern Iraq had been recognised as "protected persons under the Fourth Geneva Convention", in a statement.

The decision will allow detainees from the group access to the International Committee of the Red Cross and the UN refugee agency, the UNHCR.

"(This is a) triumph for the Iranian Resistance and the Iranian people," Maryam Rajavi, head of the National Council of Resistance of Iran (NCRI), said in a statement.

NCRI was established in 1981 when former Iranian PM Abu al-Hassan Bani Sadr was dismissed and made his way to France, to meet Masoud Rajavi (husband of Maryam Rajavi), leader of MKO.

MKO was granted bases in Iraq in 1986, and was allowed to establish militias dedicated to back up Iraqi forces in the then ongoing Iran-Iraq war.

Iraq harboured MKO as a retaliation to Iran's fostering of the Iraqi armed opposition group, the Badr Brigades the armed wing of the Supreme Council for Islamic Revolution in Iraq (SCIRI) led by Abd al-Aziz al-Hakim.

The MKO, which has previously been branded a terrorist group by the United States and Europe, is the military affiliate of the NCRI, whose headquarters are near Paris.

Iran regards the roughly 3,800 MKO fighters in Iraq as one of its biggest external threats and wants the group's members to be handed over.

Diplomats say Tehran has offered to exchange some al-Qaida prisoners it is holding for MKO leaders. Washington has refused the swap, the diplomats say.

"I hope those who claim they are combating terrorism prove the truth and confront the ones who have committed extensive crimes against the Iranian nation," he told a weekly news conference.

In August last year, the United States closed the Washington offices of the NCRI and MKO after determining that they were linked.

France too has been suspicious of the organisation. Following the takeover of the Iraq-based Mujahideen's military camps by US forces there, French intelligence suspected the group of planning to make its Paris base a centre from which to launch attacks on Iranian embassies in Europe.

The group denies any such ambition. Rajavi spent several weeks in a French prison last summer after being detained under a French terrorism probe. She proclaimed her innocence and was later released on bail pending further investigation.

The Iranian government gave a cautious warning to the United States on Monday, for granting the main Iranian armed opposition a protected status in Iraq.

"I have no information about the truth of such a thing," Iranian government spokesman Abdollah Ramazanzadeh told reporters, the day after its public enemy number one boasted it was now immune from being handed over to Iran.

But even though Ramazanzadeh said the "hypocrites" - as the Mujahedeen Khalq are referred to by the Iranian government - have "never told the truth", he did warn Washington against making any concessions towards the group.

"The attitude towards the hypocrites in Iraq will show the truth of the claims from anybody who claims to be fighting terrorism globally," he said.

"We hope the ones who accuse others of supporting terrorism act honestly themselves," he added, a clear reference to fresh US allegations of an Iranian link to the al-Qaida network.

Iran has been pushing for repatriation of the several thousand Mujahedeen fighters under US military guard at Camp Ashraf northeast of Baghdad, and last December Iraq's US-installed interim leadership voted unanimously to expel them.