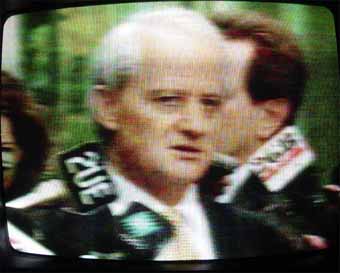 It's Friday October 2, 2003, and Margo Kingston has been busy this week. There's a false passports scandal emerging from the work of the Edmund Rice Centre - Phil Glendenning - and it's just beginning to unfold.

Because the Murdoch press once again seems to want to underplay the issue (none of the papers saw fit to cover the scandal, potentially implicating DIMIA for crimes against the Australian Passports Act, and some other imprisonable crimes), creating once again the impression they're part of the collusion to keep the PM with his con-man strategic brillance in power, Margo took up the case of covering the story in Web Diary.

The story below is a remarkable tale. First though, a box-full of summaries and links to Margo's other articles on the issues.

Update Nov 2017: While the articles below are linked to their original location at the Sydney Morning Herald, where Margo Kingston's Webdiary initially lived, Webdiary had its own environment here. While it closed shop in 2012, the site is still live for readings.

G'Day. Tonight, courtesy of Philip Ruddock's Immigration Department maestros of spin, a case study of how to bamboozle the people who employ you - us - when you're accused of perpetrating the crime you've spent years telling us you're trying to terminate - people smuggling.

Welcome to Phil's house of mirrors, where queue jumpers are reviled unless they've joined the cash-for-visas queue, and smugglers of people into Australia are spat upon by those who could well be smuggling them out! Next week, Phil will mirror his mirrors as Australia's top law officer. Don't ya just love it!

Consider the case of Mr Mathar. He got out of Australia on a false passport, which was picked up in Syria. He got back into Australia on the same false passport and out again, and into Syria, allegedly after the intervention of Australian officials. Say there was no corruption by the department. Wouldn't code red be flashing that our passport controls don't work at a time of high terrorism threats? Lateline got an expert to have a look at Mr Mathar's "passport' and he said it was obviously false. Yet the immigration department wants to sit back and wait for evidence?! It's got to be joking. As usual, the joke's on us.

We now desperately need a federal equivalent of the Queensland Criminal Justice Commission and the NSW Independent Commission Against Corruption. Senate inquiries- cash strapped, effectively powerless to insist on witness attendance - are no substitute. Since the disappearance of a frank and fearless public service and its replacement with a publicly funded group of senior apparatchiks serving the government with fear and favour and sitting on junior officers with principles any scandal is easily buried, even by the Australian Federal Police. The AFP did nothing for NINE WEEKS after our intelligence services referred the leak of Andrew Wilkie's top secret report to Government-friendly journo Andrew Bolt for a hatchet job of the whistleblower. The AFP SAID it started investigating only after the scandal broke in Parliament. The odds on it getting anywhere? The sky's the limit, despite the fact that foreign affairs minister Alexander Downer refused to deny his office was the source when asked in Parliament.

Please, please, Labor, put out a big new policy on cleaning up government. For democracy's sake.

Last night's Lateline yarn on the Edmund Rice Centre allegations of official people smuggling from Australia blew my mind, as did the Herald's coverage today. Herald reporter Debra Jopson sent me this account of her dealings with the immigration department master spinners yesterday.

Yesterday, Philip Ruddock's office flicked a series of Herald questions on claims that Australian immigration officials were encouraging asylum seekers in detention to get false passports to his department.

Ruddock's press secretary, Steve Ingram, passed them on to the Department of Immigration and Indigenous Affairs, whose spokeswoman promised to get back by 5pm. At 5.30pm, the Department's media advisors were still in meetings, perhaps as the severity of the allegations reached higher echelons.

Herald to Immigration - Re: Allegations that Department of Immigration officials and an Australasian Correctional Management officer have encouraged detainees to obtain false passports to use for leaving Australia.

In a joint project with the Australian Catholic University, Phil Glendenning, director of the Edmund Rice Centre in Sydney has recently conducted a series of interviews in Damascus with 15 Iraqis, Palestinians and Kuwaiti Bedoons who have been deported from Australia to Syria.

Six of these interviewees have claimed in these interviews that certain Department of Immigration officials and an ACM employee have encouraged detainees who have failed to achieve refugee status to obtain false passports. Two Department of Immigration officials are named; one having allegedly encouraged a deportee to lie to Syrian authorities about the use of an air ticket.

An Iraqi deportee, Michel Abdul Mathar, has claimed in a filmed interview that in 2000 when most of the avenues for his case were exhausted, he was told by an ACM officer in Port Hedland detention centre that if he obtained a false passport, he could be deported to Syria.

He says he obtained a false Iraqi passport from a people smuggler in Syria. On August 8, 2000, he was deported from Australia.

At Abu Dhabi, he claims he was taken into custody because his passport was recognised as false. He was deported back to Australia, arriving in Perth on August 11, 2000.

He says he wrote a letter to the Minister for Immigration, Philip Ruddock, explaining that he felt he had been endangered at Abu Dhabi where he was threatened with being returned to Iraq - and he gave details of how he came to have a false passport. According to Glendenning:"This letter was intercepted by the same ACM official who told the detainee that if he sent the letter he would spend 10 years in an Australian jail. The letter was torn up."

He was deported again on the same passport on October 29, 2000. His false passport bears stamp which appear to confirm these dates.

He says that during the course of his second deportation, in Singapore and Istanbul, Australian officials assisted him so that he did not have to pass any passport checkpoints. He was admitted to Syria, where he now lives.

A Kuwaiti Bedoon who cannot be named has claimed on a filmed tape that he was deported from Australia on July 14 this year from Australia on a ticket with the end destination of Kuwait. The Federal Court found him to be a refugee, but because he served time in Silverwater jail after a criminal conviction, the Immigration Minister deported him.

He claims that when he was in Villawood detention centre, an Immigration official told him to use his Damascus stopover to stay there. He claims that this officer encouraged him to lie to Syrian authorities and to tell them that he planned to go on to Kuwait. However, the officer told him he should not go to Kuwait, he claims.

Mr Glendenning has claimed that this ticket was therefore bought for the purposes of deception.

No, there have been no such allegations raised with DIMIA.

2. Has there been any sort of inquiry into whether this practice exists?

3. Are there any safeguards to ensure deportees are not travelling on false documents, given that many have close links with people smugglers?

Yes. The Department most often obtains travel documents itself directly from the relevant authorities and therefore there is no question about their authenticity. However, if an individual provides a travel document themselves, where there is doubt about that person's identity of nationality, then DIMIA would seek comment from the relevant authorities on the document's authenticity.

4. What comment do you have on the case of Mr Mathar?

5. What comment do you have on case two, of the Kuwaiti Bedoon?

6. Is it common practice to send deportees to Syria (or anywhere else) on short-term visas due to expire not long after they arrive? What is their fate then expected to be?

Persons or people who request to be removed to Syria do so by choice. These people make their own visa arrangements.

7. Mr Glendenning has said: "It is clear that some methods that have been used to move people from Australia are outside normal practice and ethical standards. In fact, some of these methods indicate evidence of corruption within the deportation process." What is your comment on that?

The Department removes people in accordance with Australian law.

People who have travelled to third countries have done so on a visa that they obtained themselves and travel was undertaken on a voluntary basis.

9. Glendenning said:"All Bedoons interviewed were told they would be safe in Syria but were issued with visas lasting between 1-4 months. This rendered them illegal in Syria soon after arriving." Is it not an inhumane practice on Australia's part to send these stateless people into limbo in Syria?

People who have travelled to third countries have done so on a visa that they obtained themselves and travel was undertaken on a voluntary basis.

Debra rang the department today to ask what it was doing in response to the allegations of criminal activity by the department. Junior department spin doctor Leah Slattery said no written statement would be issued, and read Debra the following spiel:

Debra asked if the department proposed to approach the Edmund Rice Centre to seek its evidence. Slattery replied: "We are saying no evidence has been presented to us."

The department's brick wall always beats us in the end, but I decided to have a go at getting some information. I rang the office of department head Bill Farmer. He's the bloke who got the ball rolling on the kids overboard scandal by rushing to tell Ruddock all about it so Phil had "talking points" for a media interview - before any written report or verification had been obtained

I got onto his secretary, who suggested I call "public affairs". I said the public affairs statement was difficult to interpret, and that it didn't seem sensible to ask questions to department spin doctors because they never knew the answer and promised to get back, then did, then didn't know when another question was asked, etc etc. "Is it possible to talk to someone who actually knows what's going on, and do it directly?" I asked. She put me onto a more senior spin doctor, Jenny Hoskin, deputy director of public affairs.

"You'd be aware of this oral statement she's reading out?" I asked.

Jenny: The talking points that we use to respond to media inquiries, yes. That is our normal practice, that we do with everything.

Margo: ... This is an allegation about systemic corruption in DIMIA -

Jenny: Those would not be our words, I can assure you.

Margo: DIMIA is charged with administering our migration laws. Surely if such serious allegations were made you'd pull the relevant files and talk to the relevant officers ... I didn't really want to talk to Leah because she's be just reading the script -

Jenny: And that's exactly what's going to happen in this case as well.