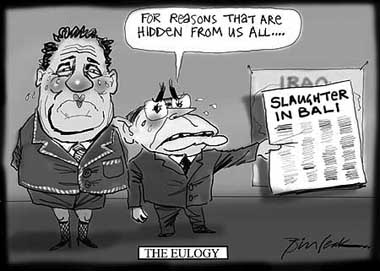 Bombs in Bali, but no Bill?

"....when the bombs hit the Kuta restaurant this weekend, I was looking forward to hearing from Bill. After all, Bill was blessed with the plum posting to Jakarta - the newly appointed Ambassador to Indonesia. I wondered what he had to say about the evils of terrorism.

None of it eventuated, I regretfully noted.

Image: thanks to Bill Leak at the Australian

Bombs in Bali, but no Bill?

Bill Farmer of course was Immigration Minister Mandy Vanstone's Agent 007 in DIMIA, who left the Lock-em-up and Deport them Department with the banging of the Regal Gong in familiar style, only to then get shoved even higher up the ladder with a kick by the Prime Minister reserved for troubled public servants - kicked up the ladder following many before him in the Department who showed themselves true servants of little Johnny - here's what the Sydney Morning Herald wrote after the ALP's Tony Burke showed documentation listing all the plum jobs reserved for DIMIA staff who were 'moved on':

Public service medals, the equivalent of a bureaucratic knighthood, were handed out like lollies in Immigration. To cite one example, the deputy secretary of the department, Ed Killesteyn, got one for his work on the very system of electronic travel authorities which Maley deplores as making us an easier mark for terrorists. Killesteyn was "gonged" for being an outstanding bureaucrat just a year ago; on Thursday, following the Palmer report, he was shuffled out of the department.

Of course all this shoving and kicking of Troubled Bill went on just before the Cornelia Rau saga hit the presses in the damning Palmer indictment in July this year. Just in time he got his plum posting as the Indonesian Ambassador in Jakarta.

Out he went, just after he uttered a mumbled Mea Culpa in the Senate Committee inquiring into Cornelia Rau, shortly before Mick Palmer's Report was being handed to the reporters - following their softening up in the weeks prior to the release of the 207 damning pages, from cover to cover an indictment, bureaucratically aimed squarely at Farmer, who was at the helm of the Department as its Secretary when all this happened.

Even our boring and arch-conservative Australian was miffed by the appointment and its timing.

So when the bombs hit the Kuta restaurant this weekend, I was looking forward to hearing from Bill. After all, Bill was blessed with the plum posting to Jakarta - the newly appointed Ambassador to Indonesia. I wondered what he had to say about the evils of terrorism.

None of it eventuated, I regretfully noted. The ABC's Maxine McKew this week on the 7.30 Report told us all: "Shortly after being informed of the blasts, Australia's Ambassador to Indonesia, David Ritchie, flew from Jakarta to Bali...."

So, where's Bill? Ahh, the Indonesians were not too happy with his appointment. On July 17 The Age reported:

The Federal Government was in damage control last night after the influential Indonesian MP Djoko Susilo, who sits on the Commission for Security, Defence and Foreign Affairs, formally raised "deep concern" about the appointment and said he could not rule out it being blocked. Mr Susilo lodged his concerns on Friday with a delegation of Federal MPs visiting Jakarta. "I talked to the delegate of the Australian Parliament, Andrew Southcott, and I expressed some deep concern with the possibility of the nomination of Mr Farmer as the next ambassador of Australia to Jakarta," he said. Last night he also claimed there was a culture of intimidation and rudeness by immigration officers against Indonesia and blamed Mr Farmer. He questioned whether Indonesians could work with him.

"We have evidence the Immigration office under Mr Farmer unfairly treated Indonesian officials," he told The Sunday Age. "Indonesian delegations have been rudely treated by Mr Bill Farmer's immigration people. This is the culture of intimidation, the culture of rudely treating foreign dignitaries under Bill Farmer." Mr Susilo said Mr Farmer's handling of immigration in Australia could also harm his ability to be an effective envoy. "At this moment we are not sure about his credibility. We want to look deeper into Mr Farmer's background. We have concerns about the controversy in Australia," he said.

The committee can block or delay diplomatic postings. "We can block the appointment of Mr Farmer if we have substantial evidence the appointment will be harmful to the relationship between Indonesia and Australia," Mr Susilo said. "We want to know that your envoy can reach out to the public at large. We basically want to have a good person who can communicate with us here in Jakarta."

I asked for answers in a press release at the time, but it all went quiet after the mutterings of the Indonesians. Howard of course made a statement expressing confidence that the appointment was going to go ahead as planned.

So, Bill, where are you? And, shouldn't Mr Howard have told us something?

Update from Dept of Foreign Affairs and Trade at October 5, 15:00pm: Mr Farmer been given Agreement by the Indonesians. He is the Ambassador Designate and will begin duties in November.