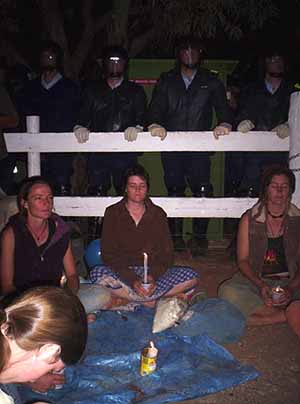 "A secret plan has been hatched and partially uncovered by WA Refugee group Project SafeCom's undercover Canberra research group. The plan includes a lobbying strategy for MP's to cross party lines over refugee issues and a mass crossing of the floor of parliament after July 1, when the Senate majority will rest with the Howard government."

Sometimes, in the world of Australian politics around refugee issues, a point needs to be made - actually, all the time points need to be made - but often the point does not easily get heard.

secret plan has been hatched and partially uncovered by WA Refugee group Project SafeCom's undercover Canberra research group. The plan includes a lobbying strategy for MP's to cross party lines over refugee issues and a mass crossing of the floor of parliament after July 1, when the Senate majority will rest with the Howard government. The plan has been operating in great secrecy within parliamentary corridors for at least three years - since the two Tampa Bills were rushed through Parliament in a desperate measure by the Howard government to win the 2001 election by stealth, but it has now grown to such an extend that information leaks have resulted.

urpose of the plan was to initially form an alliance of 'Parliamentarians for Refugees', a plan born on the backbench of the ALP, created by the so-called 'small "a" ALP members', but now the plan's ultimate purpose is to attract small-"l" liberal MP for Kooyong Petro Georgiou to be placed in an 'acting-only role' as the Federal ALP's Shadow spokesman on Immigration and Refugees, replacing the current Shadow spokesman for Immigration, Mr Laurie Ferguson.

efugee advocate and parliamentary researcher 'Moira Jane', acting for Project SafeCom's Canberra group, told Project SafeCom's office in Narrogin, Western Australia, that right around Australia refugee advocates have slowly developed the impression that the current ALP Immigration spokesman Laurie Ferguson is a long-time 'plant' by certain sections of the Howard administration, or has secret ambitions to jump ship and join the Liberal party, because he feels 'mysteriously drawn' to the Prime Minister. In a report by AAP correspondent Sharon Mathieson, published [online only] at the Sydney Morning Herald on 9 February this year, Mr Ferguson stated, commenting on MP Petro Georgiou's startling speech in Parliament earlier that week, that "Labor would oppose any move to grant permanent residency to those on TPVs", a statement that radically opposes the current ALP policy, which affirms that TPV holders will receive permament protection visas after two years.

n fact, Mr Ferguson looks like John Howard, so much so", the Canberra Project SafeCom agent said, "that whenever he wears a dark suit and I walk from Parliament back to the Opposition Wing with Laurie about 50 metres ahead of me, I often think it's the PM walking in front of me."

aurie's hairdo is virtually the only thing that distinguishes him from the PM, and it's not just the colour but the curls as well - they always make me think of the phrase "Curly hair, curly senses", because this phrase so aptly describes his unexpected and bombastic outbursts in emails and other communication. Apart from the curls and his hairdo, he's just like the PM - even his weight is near that of 'little Johnny' within ounces," the source said. "Unbelievable, and uncanny."

erguson also commented back in December 2004 that he agreed with the Howard government about the deportation of the Bakhtiari family, while there is wide agreement within 'the refugee movement' that the deportation of the family was a desperate cover-up of former immigration minister Philip Ruddock's handling of his allegation in April 2002, that Mr Bakhtiari was a liar and that he was a Pakistani. The Howard government never had any evidence for the stated conclusion, but had to suffice with encouraging and probably also 'feeding' journalistic allegations in the Australian press about the man, in spite of the fact that shortly after his allegations Ruddock travelled to Europe and Asia, including Pakistan, presumably including a fact-finding mission to try to obtain 'appropriate evidence' about Mr Bakhtiari.

ther Project SafeCom sources point to Ferguson's suggestions - when the Prime Minister announced visa changes for long-term detainees last week, also applicable to those asylum seekers in detention who had converted to Christianity - when he made statements to the press that Mr Howard's suggestions raise the stakes for refugee claimants and that they would probably do a conversion stint to Christianity in order to be eligible for release in the Australian community and receive protection visas.

ther liberal backbenchers apart from Georgiou with highly developed personal human rights convictions - not just in terms of factual knowledge but also in terms of conscience - are known to also be a part of the secret shortlist. Generally speaking, the secret backbench lead team favored liberals than ALP members, simply because the team found that because of the PM's domination in cabinet, they had been better trained in the lead-up to their "coming out" and their long-awaited public confessions of dissent with the goings-on in "Howard's inner circle".

obbyists of the secret backbenchers' team revealed how the "coming out" process was slow and very sensitive and how those who whisper of dissent with the PM's inner circle were secretly monitored, and one backbencher even suggested that the PM's office is said to use the Defence Signals Directorate's (DSD) powers of phone tapping and ASIO agents to monitor "what the backbenchers are up to".

ecrecy is the keyword of the moves on John Howard's backbench", one of the MP's told the Project SafeCom investigators. "Secrecy, information control, media spin, and running investigations 'on the quiet' from the office of the PM and Cabinet has also been the key to Howard's success since the 'Tampa elections' of 2001, when Howard used DSD and ASIO to spy on lawyers led by Eric Vardalis and their communication surrounding the legal challenge of the Tampa refugees. Howard may be deaf and dumb, but he's not stupid", the MP said. "He's a fox and he resorts to what some call con-man methods to survive in Australia's political landscape, and no one so far has beaten him to it." "Not yet. And what not is, can yet come", Georgiou is reported as having said, "and what will happen in that quarter remains my secret for now. Cornelia Rau has opened more doors than just the door that led her out of Baxter."