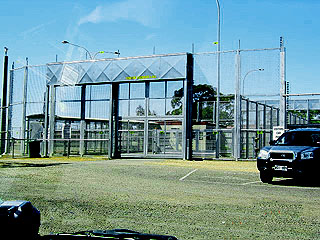 The front gate of Baxter Hell Strong words are needed to describe the maximum-security refugee jail: in the new Woomera detention centre, Australia's totalitarian and super-secure militarism towards refugees is exemplified

On other occasions he quoted the same percentages in more general terms, claiming it was "an international" experience. Latham went public with his claim on ABC's "Australia Talks Back" in October 2003. He claimed on that occasion:

"Overseas experience is that 90% of refugees who have their applications rejected abscond, and later work illegally, making life difficult for organised labour". (Mark Latham on ABC's "Australia Talks Back", 8/10/02).

When pressed by us to reveal his sources for this stark claim, Latham wrote us back, stating that "government sources" claimed this, however, he did not reveal his source - and we told him we weren't too happy with this.

Rural Australians for Refugees members were also not happy with his claim, and they wrote to several agencies, amongst them the UK Refugee Council Information Line, the Catholic Commission for Justice, Development and Peace and the Refugee Council of Australia.

The UK Refugee Council was pretty clear, and thought the claim was entirely false, and probably a misquote resulting in misrepresentation: they wrote that 90% of asylum seekers are not removed from the country - because they're in the process of getting their asylum claim assessed .... while Marc Purcell of the Catholic Commission for Justice, Development and Peace quoted a USA research study which revealed that in a supervised program about 90% of asylum claimants fully complied with requirements.

It seems that Mr Latham grabbed some statistics and thought he had understood what was the case - but that he has it all wrong.

Transcript: "Labor's New Look - was it worth the effort?"

Today with Simon Crean we were announcing the first slab of our community security policy. We do a lot of policy work and we've certainly had extensive review of our refugee stance underway since the last election, and I know that one of the earlier callers mentioned this and people say "Oh well you know mandatory detention is not the right left wing policy to have - it's not the correct left wing stance".

What they need to understand is that - ah - internationally the experience is that 90% of asylum seekers who are rejected for their application disappear into the community, very often picking up jobs illegally. So for a labor party that wants to protect trade union jobs and protect the integrity of the industrial relations system, you do need mandatory detention. You just can't have a system where 90% of people disappear into the community and threaten the legal rights of trade unionists and the legal integrity of our industrial relations.

ML: (interrupting) People who oppose mandatory detention just need to understand that the international experience points to the correctness of Labor's stance. We want a more humane, compassionate detention system, but you certainly need it to have any sense of order and legality in the processing of asylum seekers.

PB: So what about the view that because the left helped Simon Crean gain some of those crucial reforms at the conference on the weekend that he needs to deliver something to them in return and quite possibly that might be a kind of gentler policy on refugees, for example?

ML: Oh well I think that kind of talk is just newspaper talk - journalists who've got to fill up their pages. The conference voting went through on its merits. The different delegates and factions made their decisions. Simon Crean, as he's demonstrated ever since the last election, is very much his own man. He's disagreed with the left, disagreed with the right, disagreed with the centre, depending on his own views. He's very much his own person, he does what he believes is right ... gives us such good leadership. That's why there is no such deal and we'll judge all such ... on their merits.

PB: I mean I don't want to paint our listeners as being particularly necessarily representative of Labor constituency in general but we have had a number of people and essentially what they've said this evening and what they've said in the past is that Labor is no longer true to its ideals. Clearly you don't agree with that, but how do you convince these people, to bring them back on board labor, or have they just gone? Are they just like green voters now who will never come back?

ML: Well Paul, it was ever thus. I remember Gough Whitlam ....

Thank you for contacting the Refugee Council Information Line. What an interesting claim the media is making - it is absolutely false!

It appears that the media there has misconstrued some data put together by Migrant Watch UK, a right-wing anti-immigration group. Migrant Watch state that of ALL the people who come to the UK seeking asylum, only 10% are removed.

The media must have taken that to mean that 90% disappear, but actually the 90% not removed are people going through the asylum process - either waiting for a decision on their application for asylum, or going through an appeal. You can find a summary of the numbers on our website:

The Home Office: http://www.ind.homeoffice.gov.uk/ estimate that 42% get positive decisions (either refugee status or exceptional leave to remain - ELR) and about 10,000 -12,000 per year are removed. When you count the number of people actually still going through the asylum process (waiting initial decision, appeals) and the numbers who are complying with the government, have been refused asylum, but can't be removed (ie. too ill to travel, Kurds from Northern Iraq with no safe way to travel home), then you cannot come up with numbers to match [the] claim that 90% abscond!

Also, there are many who leave the UK without telling the Home Office - we have no numbers on these who leave on their own. Thus, any statistics on the number of absconders are guesses at best.

What we also find interesting is that even the right wing anti-immigration groups here in the UK (like Migrant Watch) would never go so far as to claim that 90% abscond.

I hope this information will enable you to respond to the media. If you have any further questions, please don't hesitate to contact our Parliamentary Officer.

Toddlers behind the razor wire

Children are the innocent victims of Britain's hardline asylum policy

"By its own admission, the government has no evidence to show that families are increasingly absconding. A report produced last month by South Bank University in London shows that, given bail, nine out of 10 asylum seekers comply with the law".

Since late 2000, the Hotham Asylum Seeker Project in Melbourne has provided assistance to over 40 asylum seekers released early from detention on Bridging Visa E.

None have absconded. This experience is supported by the Government's data on people released from detention: "No unauthorised asylum seeker released on a bridging visa in Australia from 1996-1998 failed to meet their reporting obligations to DIMA." (Office of the Minister for Immigration and Multicultural Affairs in response to a question on notice by Senator Natasha Stott-Despoja made on September 1, 1997 - Question 803).

Back in 1994, the Department of Immigration told Parliament "that, from its experiences with applicants in the community, there usually is no problem in maintaining contact with an applicant while the application is being assessed. (Joint Standing Committee on Migration 1994, p.110-111).

In 1996 the US Immigration and Naturalization Service (INS) supported a three-year test of community supervision for people in immigration proceedings in New York City. Overall about 90% of supervised non-citizens appeared in court compared to 71% of non-participants. Those asylum seekers in the intensive, supervised program attended all court hearings at a rate of 93%. Regular participants achieved an attendance rate of 84%.

Factors encouraging compliance were representation by lawyers and the presence of community and family ties in the U.S. Asylum seekers generally possess a strong interest in pursuing the application process to its conclusion, and therefore pose a low absconding risk irrespective of differences in level of supervision. Special attention was drawn to the positive implications arising out of the program's practice of treating asylum seekers with dignity and trust.

In the Justice for Asylum Seekers system certain compliance measures may be similar to the reporting requirements under the parole system, with asylum-seekers required to report to a DIMIA office at regular to advise of any change of address or other circumstances. Case managers would undertake to know where their clients are living.

In making decisions on various forms of release, a small margin of absconding needs to be taken into account which should not in itself pose unreasonable concerns to authorities or the community given that health and security checks have taken place. However more importantly, evidence shows that the fear of absconding is exaggerated. No unauthorised asylum seeker released on a bridging visa in Australia from 1996-1998 failed to meet their reporting obligations to DIMIA. [21] Similarly, an INS experiment in the US of 640 detainees released into the community had a 95% compliance rate on release. [22] In Sweden, there has proven to be a high level of compliance and voluntary repatriation in negative decisions with very few asylum seekers absconding under supervision. A system of release into the community, after initial health and security checks, has brought significant reduction in the use of taxpayers' money and in public outcry. Sweden now has the lowest levels of illegal immigrants living in the community in Europe, with research showing that resettled refugees integrate quickly into the community with no increase in levels of welfare dependency or crime. [23]