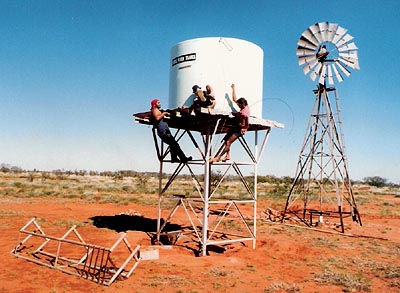 Image: "Got 'im up, boss!" Indigenous employment preparation training students, in a course facilitated for and by the WA mining industry in the Pilbara, assist Peter Coppin on his The Grey River property to haul up a watertank (photo Jack H Smit, 1993)

Project SafeCom is a 'community development project', and it is an incorporated association.

There are two sections to this page: the first section, immediately below this box, was the first-ever implementation vision, written and conceived during 2000-01, and based on generous availability of federal and state government funding for community development, farm diversification, training and education, and sustainable land development, during the Hawke and Keating governments.

The concepts laid down in that section of this page ask for implementation - but it was given in the knowledge that no strict timeline was intended to be set in the parameters of Project SafeCom's Constitution. The second part of this page, titled "What is Project SafeCom?", inside the beige box, clarifies this.

The determination of the timeline happens on Committee level, within the context that 'some time in the future' the need to establish such an intentional community, in the context of climate changes and perhaps disasters, will no doubt become evident.

Where is the land?

The Project SafeCom people do NOT have this piece of land as yet.

There are a couple of things in Western Australia which make this very possible. Western Australia is the largest State in the world. It also has only about 2 million people who live in the State. With so much space, it is quite possible that they can be given thousands of hectares of land for the project.

Are we loopy greenies or hippies?

You thought that, didn't you? Let me confess: One member of the Committee says: "I DO feel a bit whacky when I think of making such an ambitious plan for a huge farm without having such a farm. I DO feel I must be nuts even considering planning this. But I also know that I have never allowed myself to be put into a 'box', and I don't like being 'labelled'. That's an educated way of calling somebody names."

"When I grew up, there were hippies everywhere in Europe. And while my friends listened to Procol Harum and The Beatles, I was too busy studying the Organ music of Johann Sebastian Bach. The things that were typical for "hippies" in Western Europe, went by without me really understanding what all the fuss was about...."

Can we challenge you? Have a look through the entire Web Site, and then come back to this paragraph, and think for yourself for a minute whether you think we're loopy, whether we're hippies or whether we're Greenies. Don't forget to look at the Steering Committee page and see whether we look like hippies.

For now we can state that some of the policies of the Greens of Western Australia reflect some of the things we want with our project, but we have no affiliation with any political persuasion.

The Project SafeCom people want to look really well after a large chunk of land in Western Australia.

They want to make all the salination go on this land go away, plants tens of thousands of bushes and trees on it, and look after the animals that live on it.

They want to run a very large farm on this land, with cows and sheep, with chooks and geese, and with ducks and lambs. They also want to grow a lot of "organic" vegetables and fruit and nuts.

They do not want to use any chemical fertilizers if they can help it. They NEVER want to hurt the animals that live on it.

The rules for this good way of looking after land and plants and animals are explained in the constitution. Here is a part of that constitution:

... to develop and implement a property strategy within the strictest guidelines of what constitutes "sustainability", "energy efficient", "organic farming", "permaculture", "non-chemical fertilisation", "nature conservation" and "re-vegetation".

Honouring the principles of non-violence needs to extend to animal husbandry. For a few decades now, strong voices have protested and lobbied against animal cruelty on farms and in the food industry. This protest has related to "battery hens", treatment of sheep and cattle during transport - also in the lucrative Western Australian "live sheep trade and export", and the sometimes appalling state of affairs on pig farms.

Project SafeCom's future farming property will adhere to the non violence principles in relation to the treatment of animals in the following ways:

People, especially those people - and farmers - who live in more remote areas of Australia, or in the outback, access this Aquafer by drilling a deep hole, installing a pump or a windmill, and by pumping the water into a tank.

This way of harvesting and storing water will not be the only strategy in operation at Project SafeCom. We at the project know too well how precious a resource water is in Western Australia.

At the property of Project SafeCom we will engage in an active water harvesting program. Elements of this program will include:

Looking after plants and crops

At Project SafeCom we are committed to apply methods of (w)holistic farming. The implications of this commitment extend to:

We don't believe a word of all the optimistic stories about the great benefits of genetically engineered crops that are doing the rounds amongst governments and amongst some sections of the Australian community.

We have the impression that the facts about genetically engineered crops have been more thoroughly researched by Greenpeace than by any Government. It seems clear that the companies who develop genetically altered crops, and who are in the business of selling this product (the genetically engineered seed) for profit, meanwhile - through patenting their inventions - creating a Monopoly, have absolutely no interest in finding out the dangers to conventional crops already present in the world.

We believe that ALL crops in Australia are in danger of being infiltrated by stray pollen of genetically engineered crops and infiltration of these plants. At Project SafeCom, we will do whatever we can to keep the property free of this type of infiltration.

Our farm manager and our environmental consultant(s) will fight hard, study thoroughly, and inform us fully of the strategies needed to achieve our purpose.

Have a look at the two snippets from recent research, the first one by Greenpeace, the second one by Cornell University:

"Genetically altered corn may be deadly to Monarch butterflies" - The news has many people wondering whether killer corn is such a good idea after all. Laboratory tests conducted by a team of Cornell University researchers this spring resulted in the deaths of nearly half of the Monarch caterpillars that ate milkweed leaves dusted with pollen from a new brand of genetically engineered corn. (No date)

According to the Constitution, Project SafeCom promises to be "....a Safe Community in Western Australia for people of any race, gender, creed or nationality, who are displaced as a result of Wars or Political, Social, Climatological, Ecological and Geological upheaval and/or Disaster; and for other users as and when appropriate...."

The full text of the 'looking after people' section can be found on another page on this Site, the people page. You can click through to this page via the menu. The section below is a summary of our plan for just one of the user groups of the facilities at Project SafeCom.

Project SafeCom is a community development project and an incorporated non-profit association based in Western Australia. It was established in December 2001. The vision of Project SafeCom is laid out in the constitution in summary form, but in practice this vision provides for a set of ethics, a direction for its values and social responsibilities.

The Constitution defines Project SafeCom as having an intent to establish a safe community for people of any race, gender, creed or nationality, who are displaced as a result of Wars or Political, Social, Climatological, Ecological and Geological upheaval and/or Disaster; and for other users as and when appropriate.

Below are some comments about the practical implementation of this vision, adapted from a 2007 work areas definition statement.

Project SafeCom has marked its values, directions and ethical positioning to refugees, displaced people and various other vulnerable population groups by defining a vision of a rural, farm-based sustainable community in [Western] Australia which would act as a safe community for people of any race, gender, creed or nationality, who are displaced as a result of wars or political, social, climatological, ecological and geological upheaval and/or disaster.

By capturing a community vision in this practical way - without stipulating a timeline for its implementation - Project SafeCom has defined its values of adherence to relevant International Conventions, environmental sustainability and, as its logo alludes to, values of care for land and care for people, while at the same time this notion of "intentional community" alludes to what may to a greater or lesser degree become a future community life form and community practice in an era where Australian city life and ecological/societal cohesion and equilibrium may be seriously affected by climate change.

Project SafeCom opposes the Australian Government's mandatory detention of asylum seekers and refugees and the restrictions placed on their basic freedoms and sense of dignity.

Since its implementation in 2001, Project SafeCom has opened up and refined its contribution to the national debate on human rights issues, aspects of the anti-terrorism legislation, asylum seeker/refugee treatment and policies, and the relationship with Australia's Indigenous people through frequent and impassioned media work, submissions to Parliament, communication with many individual MPs and Senators of all parties and sides of the House and Senate, and through regular community-based events, forums, debates between key stakeholders, and through movies, performing arts events and dramatised readings.

It has also represented detained asylum seekers and availed itself as a bridge between their interests and mainstream Australian media, and has been successful in achieving change of circumstances, and release from detention, for several individuals and families, using the method of bringing a previously untold story to the attention of the Australian public as well as the Federal government.

Through its online shop it brings relevant literature and movies to the attention of the public while at the same time using these sales as a form of revenue raising to assist its operations.

Project SafeCom's highly valued Daily News and Updates, a subscriber-based electronic newsletter, links many people in Australia's Human Rights lobby and sources them with the flood of print- and other media in its relevant mandated areas of refugee issues, anti-terrorism legislation, environmental and climate change policies, and indigenous issues.