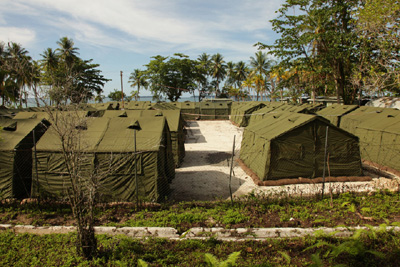 Manus Island detention centre. If you think this is a "neat, organised and sunny" picture, then you're right: it's an Immigration Department Public Relations photo. Below are the "real" photos, sent by those jailed in the godforsaken place.

It's not just the stifling tropical heat, but it's also the perpetual high humidity and endless rain. It's an environment where everything rots.

Australia's Guantanamo Bay. Too often that has become the nickname for Australia's Manus Island refugee jail. Here are some examples of major media organisations using that nickname. And not without reason!

This page is about our obsession with locking up asylum seekers, indefinitely, in ghastly offshore places - in this case, on Manus Island. Here's the list of paragraphs:

It's a fantastic environment for cockroaches and rats: the communities of these opportunistic scavengers flourish. To establish, in this environment, a 'temporary but permanent' prison camp for asylum seekers in army tents, expresses with calculated precision the measures Australian politicians dole out to asylum seekers who have the 'temerity' to seek protection, without invitation, merely by automatically invoking their rights of entry under the United Nations Convention for the Status of Refugees.

The Manus Island refugee jail is located in the grounds of the Lombrum Naval Base. Australia acquired the base from the USA in 1950 when Americans lost interest in the facility. That the detention centre is located inside an Australian Defence Force facility is not by accident. It avoids the Federal government having to answer to any of its nine 'pesky' State and Territory governments - who may have something to say about human rights abuses or breaches of their State Human Rights Charters.

Locating detention centres within Defence Force facilities is standard fare for Australia's Federal government. Only the Federal government has authority to do as it pleases on these grounds. With the stroke of a pen no-fly zones are established to stop snooping media helicopters (it happened at the Baxter and Woomera refugee jails when civilian protests were imminent). Another stroke of a pen excludes reporters and journalists from being close to, or entering the land. That's also standard fare. On Australian Defence Force land, arrest of 'intruders' is automatic - and stiff penalties can be applied to citizens subject to these prohibitions. Australia's refugee jails, euphemistically called 'immigration detention facilities' are the ultimate expression of the ruthless powers of State.

It was Gerry Hand who started it all. Standing behind him were the invisible immigration bureaucrats, and behind these hideous yes-men were bucketloads of Australian racism, and surrounding the racists was Australia's Official Government Racism - the only just deleted White Australia Policy. Immigration bureaucrats were livid that about 200 Cambodians had arrived by boat - they insisted on punishing such initiative, and during 1992 Gerry Hand, Paul Keating's Immigration Minister, did their bidding. But it wasn't enough. Newspaper stories, radio and TV reports just did not stop. Assisted by the Human Rights Commission (HREOC) and good lawyers, some asylum seekers (and sometimes an entire boatload!) in the Port Hedland detention centre won Federal Court cases against the Immigration Minister. Something had to be done.

Immigration began sneakily shifting some asylum seekers who were in touch with their lawyers to other detention centres. This was a callous and brutal act of illegality on the part of immigration henchmen, but it was never legally challenged. It was also the beginning of remote and desert detention, and although it would take about seven years, the idea of jailing asylum seekers in Woomera and Baxter, far away from lawyers, journalists, advocates, activists and the curious public was born in this context.

It took John Howard's Immigration Minister and brutal policy wonk Philip Ruddock to open the Woomera detention centre in November 1999. Then, in the heat of Howard's 2001 "MV Tampa" election and the kids overboard scandal, Ruddock and Howard were covertly assisted by John Howard's Foreign Affairs Minister Alexander Downer to deport hundreds of asylum seekers on Australian Navy ships to the tiny island nation of Nauru, and later, to Papua New Guinea's Manus Island. With that, John Howard's Pacific Solution was born. 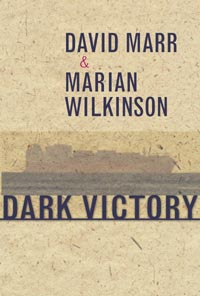 As part of John Howard's Pacific Solution, the Manus Island centre was opened in October 2001 following the brutal storming by the SAS of Arne Rinnan's MV Tampa. Passengers from the rescued wooden boat Palapa were shipped to Nauru and Manus Island by the Australian Navy.

For the development of Howard's Tampa scandal and the Pacific Solution, see Marr and Wilkinson's Dark Victory.

In July 2003, the Howard government announced the closure of Manus Island camp, but in August that year, journalist Sarah Stephen revealed in Green Left Weekly that just one asylum seeker, Alladin Sisalem, was left behind on the island. We reinforced Sarah Stephen's report by means of a press release:

As a result of this collaboration, the story was covered nationally by most Australian media outlets, making it impossible for Howard, Ruddock and the Immigration Department to maintain their denial that Stephen's report was accurate (see also the related pages below). Finally, on May 28, 2004, Mr Sisalem was granted a protection visa, and his departure to Australia closed the Manus Island detention centre.

The final death knell to Howard's Pacific Solution was delivered after his government's demise in 2007 by Kevin Rudd, during the first glorious ascendant year of his fresh-faced Labor government. His immigration Minister Senator Chris Evans called the Manus and Nauru refugee deportation strategy "a cynical, costly and ultimately unsuccessful exercise". The closure of Nauru in February 2008 was the final act in this expensive drama.

Regrettably, Kevin Rudd's post-Howard Labor never really recovered from Howard's Tampa wedge. Many people cheered loudly in 2007 when Rudd the Howard-slayer brought an end to conservative rule. They had cheered too soon. In the dying days of the Rudd government, Labor MP's covertly travelled to Manus Island to re-open the refugee jail. Nauru was revived too. Labor under Prime Minister Gillard violently lurched to the right on asylum seekers, and by October 2009 Labor had its own offshore processing (read 'punishment') hell.

A lot of this Labor lurching was intensified by arch-conservative agressive boxer and street-fighter Tony Abbott, who went on to win the next election to be Australia's 28th Prime Minister for two years from 18 Sept 2013. With his sheer fanatical Immigration Minister Scott Morrison, he continued the Howard-styled brazen destruction of Australia's compliance with United Nations and international refugee law compliance. It was under his watch that asylum seeker Reza Berati was murdered in the Manus Island detention centre.

In September 2015, Tony Abbott was kicked out of his job by self-styled millionaire Malcolm Turnbull who, in securing the Liberal Parliamentary party leadership, signed a confidential agreement with arch-conservative National Party leader Barnaby Joyce. This agreement included a clause that never during his entire Prime Ministership any changes would be enacted to the ruthless and hardline policies implemented by Tony Abbott.

Under Malcolm Turnbull, who appointed former Queensland 'local copper' and MP Peter Dutton as his Immigration Minister, the cruelties on Nauru and Manus Island continued unabated. The Liberals maintained their heinous and ultimately extremely stupid policy platform for asylum seekers who have arrived by boat, first proposed by John Howard: "You will never, ever allowed to be settled in Australia".

On 26 April 2016 however, PNG's Supreme Court ruled that the detention of asylum seekers on Manus Island is illegal under that country's constitution.

After more than a year of secrecy and government avoidance of openness, of silence and non-responsiveness to media inquiries, Turnbull's Immigration Minister Peter Dutton finally announced on May 16, 2017 that the progressive closure of the Manus Island refugee jail would be completed by October 31, 2017.

All asylum seekers now have, largely by means of aggressive force by PNG authorities, been transported to the town of Lorengau on the island. Instead of being jailed in a fenced jail camp, they are now forced to live in a compound.

As Guardian Australia reporter Ben Doherty puts it: "The men held in the East Lorengau centre are allowed to go outside during the day but their movements are restricted, and they cannot leave Manus Island".

The Manus Island refugees have swapped their camp-jail for an island-size jail. The Australian government, in collusion with Papua New Guinea, has stolen their freedom of movement and their liberty to enact their freedom as world citizens. If they don't belong to the select group who will leave for the USA under an agreed refugee resettlement deal, they will remain prisoners of Australia's extremist asylum policy until the day they die.

25 October 2017: The dying of Hamid Kehazaei - Not just 'the death', but also 'the dying' of Iranian asylum seeker Hamid Kehazaei should be remembered and never forgotten. Because it's 'the dying' of Hamid which tells us something about the brazen brutality of the then Prime Minister Tony Abbott and his 'henchman' Immigration Minister Scott Morrison.

21 October 2016: The Wilful Killing of Reza Berati - On a fateful evening in February 2014, Iranian asylum seeker Reza Berati was brutally kicked and bashed to death. This page stores hundreds of items published following his death, covering the period between February and June 2014.

24 October 2010: Remote Islands and Penal Colonies - Australia's response to boat refugees is marked by dehumanisation, regimentation, incarceration and isolation. The way we respond to those seeking shelter is similar to the way the British expelled thousands of their own unwanted in the 18th Century: those on the First Fleet were sent to the penal colonies on the far-away island of Australia.

9 February 2008: The End of Howard's cynical Pacific Solution - 'The last 21 Sri Lankan asylum seekers on Nauru have been recognised as refugees and approved for resettlement in Australia, closing the book on John Howard's notorious "Pacific Solution".' Here's a page bringing the news, marking the end of a dark chapter.

21 October 2003: Horror on Manus Island: the story of Aladdin Sisalem - In July 2003 Australians were told that Australia's Pacific Solution Lombrum Processing Centre on Manus Island was no longer operational. But DIMIA left one asylum seeker to rot on the Island. Aladdin was Palestinian and Stateless, and Australia claimed, after having locked him up, to have no responsibility for him.

Click on the thumbnails to open a large size photo in a new browser window.