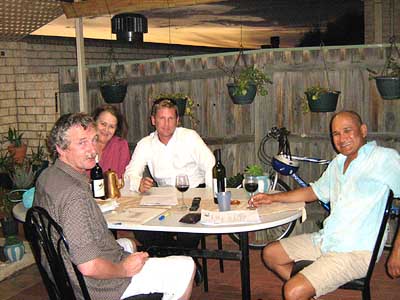 Here's a picture of the committee or the "Project SafeCom Working Group", during a meeting in January 2008. For several reasons we decided to start using the name 'working group'. In the picture from left to right: Jack Smit, Sally Wearne, Jeff Strahan and Vic Hoisington.

Sometimes we have 'electronic' meetings!

The Steering Committee or Working Group is a committee with a wider and looser brief to what is commonly called the Board of Management.

The West Australian Incorporations Act was written more than a century ago - but in 2006 we successfully changed some aspects of our constitution.

With these changes, we may well have become one of the first community associations in WA to force the Act to work for us in the age of the internet and email.

All Project SafeCom activity has now ceased; the association was wound up in the year 2020. This website is being kept in place as a historical record and as a research instrument for the public, and for students, academics and researchers worldwide.

The Project SafeCom bank accounts are now also closed, but we've kept the PayPal account active. Any donations are welcome: they will be used for maintenance and payment of the website, and to ensure the continuing presence of this important resource.

Below are some of Steering Committee members who were elected or confirmed at the 2007 AGM for the 2007-08 term, or those who were appointed to fill casual vacancies thereafter. 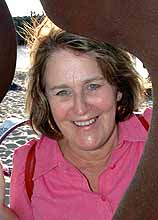 Sally Wearne is a Registered Nurse (BScN) and a Midwife, and she has been working in Fremantle Hospital's Cardiology department for the last ten years. In 'times past' she has lived in the UK, Canada and Jamaica over a 15-year period. She is a Council and Executive member of the Australian Nurses Federation (WA Branch).

Sally lives in Fremantle with husband Paul and her 21-year old son Nick and her dog. She has been involved in Fremantle-based community campaigns such as the Leighton Action Coalition, where she is a core group member, as well as the Save Ningaloo and the Coogee Coastal Action Coalition campaigns. 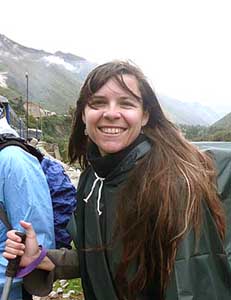 I am currently doing my honours in Anthropology and English and working as a Research Assistant. I've lived in and around Fremantle since the age of three, I went to local primary and high schools, and I've worked, played, shopped, been entertained, fed and 'watered' in Fremantle for pretty much all of my life. And although I've travelled and lived and worked in other places, Fremantle has never ceased to be the place that, for me, is strongly associated with words like 'home', 'community' and 'belonging'.

Since my twenties, mainly through travel and study, my interest, understanding and awareness of political, social and cultural issues (global and local) has been developing, with a particular focus on migration and refugee experiences. Likewise, I have been developing a stronger sense of my own values and priorities. So far I have found expression for this as a supporter of environmental and social / human rights advocacy groups and through activities like protests, letters and petitions. More recently, my decision to join the Project SafeCom committee was informed by my aspiration to be more actively involved with the (global) network of people working towards environmental sustainability and social, cultural and political justice.

I am, at times, confounded by the complexities of the world's problems, and feeling frozen or immobilised by the hugeness of issues - difficult to grasp let alone solve. But I am also inspired by the many individuals, groups and organisations who find their voice and mobilise. To that end, I believe very strongly in the importance of education and a well-informed citizenry, in communication and dialogue, and I believe greatly in the strength and importance of community based, 'grass roots' activities to bring about sustainable change. 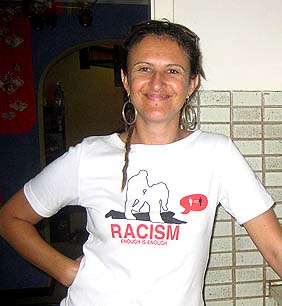 Although born in England, I have grown up, lived and studied, on and off, in Fremantle since I was four years old. Despite my connection with Fremantle, I love to travel, meeting new people, experiencing new cultures, tasting new food. In 2000 I moved to Melbourne for a couple of years during which time I became active in the refugee movement, attending many protests and trips to Maribyrnong detention centre. In Easter 2002 I made the trip to Woomera detention centre, where I was horrified to see first hand, the grossly inhuman way we treat those seeking our help.

In 2002-03, I spent several months living and studying in Yogyakarta, Central Java. During this time I witnessed first hand the daily struggles for survival of many kampung (village) dwellers. I also had the opportunity to be involved with a local grassroots arts/activist/community development group committed to the ongoing struggle for liberation of oppressed peoples. Using various forms of art as their medium, they sought to engage the rakyat (people) in an ongoing dialogue surrounding their history, their rights and their vision for the future. These overseas experiences compounded my commitment to social justice and equality and inspired me to take up community development studies on my return to Australia.

Although overjoyed at the demise of Howard, and hopeful in the light of Rudd's apology and other commitments, I believe we have much work to do in Australia to improve both our human rights and environmental record. Unfortunately, I fear the government will fall short in these areas, unless civil society groups continue pushing for justice and change. Joining Project SafeCom, I hope to be able to play a role in and contribute to this struggle for social and environmental justice.

Ex-officio member of the Steering Committee 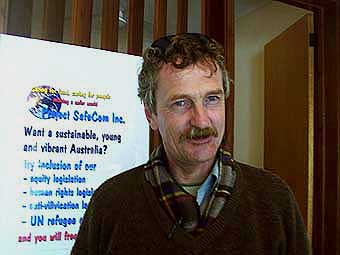 Before migrating to Australia in 1980 I worked in Europe as a Residential groupworker and facilitator in open institutions for child protection and disability care. In Australia I worked as a social worker, as a training and policy development consultant and as a teacher, also in remote areas with the Indigenous community. In the years leading up to Tampa and the formation of Project SafeCom - a process I initiated as its main founder - I taught community work and community development at TAFE colleges where I lectured skills in project management and tasked my students with the formulation of a cross-culturally sensitive hosting and open residential program for 'unannounced' refugees arriving in Australia by boat, and challenged them to respond to Australia's treatment of boatpeople under the Howard government.

I think the future in Australia needs to include a fiercely independent civic voice and response to human rights issues and social policies, and an approach to the way we assist also climate refugees in the context of an increasingly upset planet Earth that groans under the weight of how we've been treating our environment in the last century, and that's why I think Project SafeCom's environmental and sustainability mandate in the context of refugees and displaced people will grow and develop in relevancy in the next decade.

Some, but not all, past committee members are below. The list also includes volunteers with special duties.

Cedric Beidatch was the Chair during 2006 and 2007, and he retired from this position at the AGM in October 2007. In addition to Project SafeCom, Cedric belongs to the Greens Party, the Gaia Foundation, the National Tertiary Education Union and he is a faculty representative on the committee of the UWA Post Graduate Students Association. Earlier Cedric was involved in organizing the April 2005 Perth Social Forum.

Cedric joined Project SafeCom because he was very worried about the backwards developments in human rights and civil liberties in Australia and in the world. Cedric is South African born.

12 January 2007: Meditations on a new millennium: After the Tampa - A poem by Project SafeCom's Chair Cedric Beidatsch. "Evil does not lie in choosing to do wrong: It lies in not choosing to do good."

29 October 2004: Cedric Beidatsch: Coming to terms with the 2004 election - Although the pundits suggested there was a possibility of a victory by the opposition Labor Party, most people expected the incumbent Liberal - national coalition under the rat cunning John Howard to be returned....

29 October 2004: Cedric Beidatsch: The aftermath: moving ahead from the 2004 election - Now is the time to be creative; to try new ways, to think new thoughts; to experiment with political forms; to revisit and learn from old traditions and forgotten histories with new eyes. "Let 100 flowers bloom, let 1000 schools of thought contend".

The excerpt below includes adapted material from the WA Greens website. 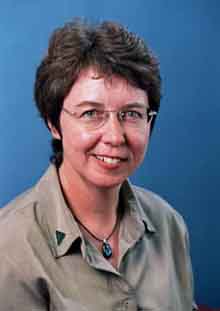 After her resignation from the Project SafeCom committee, Lynn moved on to join the WA Council of Social Services policy officers team in 2005. She is standing for Greens preselection for the Senate ticket at the 2007 Federal elections.

Previously a small business owner/operator, Lynn has worked with many organisations, including the Environmental Defender's Office and the Community Housing Coalition. She is an instrumental supporter of many community campaigns focusing on Saving Leighton Beach, stopping the Fremantle Eastern Bypass, giving communities a right to appeal planning decisions, and ensuring the safe cleanup of contaminated sites. She also led local campaigners to put live animal exports on the public agenda.

As an Electorate Officer for 7 years working with Jim Scott, MLC for the Greens in Western Australia, Lynn has a keen sense of issues throughout South Metro. In addition, Lynn has worked with Giz Watson, MLC, expanding her knowledge across a range of portfolios from planning and transport to health and multiculturalism.

Lynn uses her skills and experience as a campaigner and Electorate Officer to train others in accessing and lobbying Parliament. She is a champion of those whose voices are ignored by mainstream politics, with ongoing efforts to promote community consultation and involvement in decision-making.

5 April 2005: Project SafeCom's Chair Lynn MacLaren enters State Parliament - As a Greens Parliamentarian and activist, I have a responsibility to raise 'the community voice' in this chamber. And raise it I will, especially in regard to matters of injustice, indifference, short-sightedness and cruelty. I believe another world is possible. And that each of you has a part to play in bringing about that transformation. 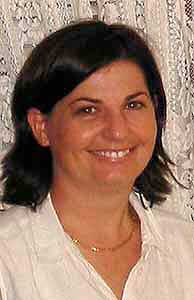 I was appalled with the Government's behaviour towards refugees and became actively involved primarily through letter writing to those detained in Port Hedland. I also, for the first time, wrote letters to politicians of all parties. I became involved with Project SafeCom in 2003 when I attended Project SafeCom's Symposium -The Cost, The Carnage and The Bill. Shortly after, I became a member.

In 2005, I became a member of Project SafeCom's steering committee and also became its Secretary. Unfortunately I have resigned from the secretary position for 2006 due to work and home commitments but I hope to stay on as a committee member as I feel I can contribute positively to the organisation. With the Howard Government winning a fourth term, it is imperative that Project SafeCom continues its hard work of getting the truth out to the Australian people. I am currently studying a Dip Ed to add to my degree in Japanese studies and I work part time at one of Perth's Universities.

Justine Brosnan was also the Winner of our 2006 Volunteer Of The Year Award. During that year she held our Volunteer Trophy (click to open).

Members' Meetings are irregular but periodically, including the Annual General meeting. All members are notified by email or by postal mail.