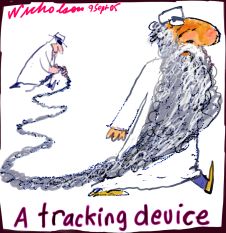 Image: Thanks to Peter Nicholson and Nicholson Cartoons.

On the weekend of 26/27 November 2005 the State ALP Party Conference took place in Perth.

Delegates of the WA Anti-terrorism legislation Action group attended the conference and engaged the delegates, with a degree of success.

Colin Penter of the WA Social Justice Network reports, followed by the motion that passed and an extract from the ALP Policy.

His report is followed by the text of a flyer distributed at the time in Perth and Western Australia.

Thanks to everyone who was there on Saturday from 7.30-10.30 - over a dozen of us at various times, including the Amnesty volunteers. Thanks Candice, Mark, Gavin and Nicole for all your assistance in pulling it together. It was great we had such good numbers as we were able to cover all the entrances and also engage delegates in conversations.

Working together to cover all main entrances into the front registration desk we were able to hand out information about the Terror Laws (including the Facts Sheet, Draft letters and Amnesty pamphlet) to every delegate before they registered and walked into the conference. The majority of the delegates accepted the information, and many were supportive of our action.

I think everybody who was there felt the importance and value of what we did. There was strong interest from many delegates and many I spoke to were unaware of the detail of the Act and appreciative of us being there. Security tried to move us on outside a couple of times but with a bit of assertive sweet talk we simply stayed on without any hassle. Talking with the people from the Wilderness Society who were also there and a couple of people from the Gunns/Free the forests Freedom of speech Tour we were also able to build some links and identify opportunities to work together.

Amnesty also set up a stall/information table in the forecourt outside the main convention hall and someone was there all morning. The "stall" included one of the big banners (Condemn Terror, Not Human Rights), the Amnesty material including the pamphlets and posters produced for the campaign and a selection of Amnesty stickers, magazines and information.

The State ALP Conference endorsed the following motion at the weekend conference passed as I understand it with minimal dissent. David Ritter from Labor Lawyers, who moved the motion told me that while resolution is not as strong as many would have wished, it is the strongest resolution that was possible in the circumstances. The wording is obviously also somewhat clunky - a reflection of hurried drafting and negotiations with the involvement of many hands and minds. The seconder of the motion was from the CFMEU, and apparently there is cross faction support for this.

In addition to the resolution, new policy was also passed in relation to a state bill of rights type instrument and, again, in relation to terrorism. The relevant sections of the policy are also included.

I think it will be really important for us to talk about what we can realistically achieve at the state level and what strategy is best. I will liaise with Giz's office to follow up last Thursday's meeting. We will write up a brief summary. I will also try to have a chat to Louise Pratt as well. I guess we need to see what happens with the Federal Legislation and then be able to move quickly, with a considered and coordinated strategy at the state level. Could anyone with links with State MP's perhaps explore their thoughts about the issues to assist in developing strategy?

Re the Federal ALP. Gavin engaged Chris Evans ALP Senate leader in conversation for some time on Saturday morning. His view seemed to be that at a Federal Level, the bill is much better as a result of the ALP's efforts.

The ALP are concentrating on the IR legislation as that affects pretty well everyone while the anti-terror legislation will only affect a handful of people.

85% of the electorate are shitting themselves about terrorism (and by implication there aint no votes in opposing the legislation).

WHY WE MUST STOP THE TERROR LAWS

If the Federal Anti-Terrorism Bill (No.2) 2005 and proposed complementary State laws are passed, they will undermine Australian democracy, violate Constitutional separation of powers, breach international law and human rights and make Australia more like a Police State. So say former Judges, the Law Council of Australia, the Human Rights and Equal Opportunity Commission, past Prime Minister Fraser and a wide range of legal and community organisations and individuals.

The new laws will target the Muslim community, activists and critics of the Government.

The Coalition Government says "Trust Us" with these laws. How can we trust a Government that has lied to us about the new IR laws, the invasion of Iraq, the "children overboard", Telstra and a lot more?

Here are just a few of the many very troubling aspects of the proposed laws.

The mere intent to "urge disaffection against the Constitution or the Government or the Houses of Parliament", or "to bring the Sovereign into hatred or contempt" is seditious.

Mahatma Gandhi, Nelson Mandela, members and supporters of the Eureka Stockade and the Australian Communist Party and other democrats and liberators were sentenced to imprisonment for sedition. Unionists, Artists, Journalists, Dissidents, Environmentalists and Protestors could all be targeted.

Terrorism, or supporting, praising or advocating terrorism are dangerously widely defined. If industrial action is deemed "unlawful" it could be termed terrorism. Support for any liberation movement such as the ANC or Fretelin (in the past) would have been terrorism under this law, as would now supporting Turkish Kurds, Spanish Basque or pro-independence movements, even though they are not in conflict with Australia, and even if they were fighting despotic and undemocratic regimes. Praising Guy Fawkes or the American or French Revolutions could qualify as praising terrorism.

NOT ENOUGH CONSIDERATION OR COMMUNITY CONSULTATION

The Federal Government has rushed in this huge and wide-ranging legislation. It refused to release the draft Bill for public comment prior to tabling it on 3 November 2005. Then it gave just 7 days for submissions to be made to the Senate Legal & Constitutional Committee. That Inquiry is required to consider all submissions (about 300) and oral hearings and report by 28 November 2005. Contrast the 3 months allowed to consider ASIO legislation in 2002.

Former Head of ASIO, Dennis Richardson said in May 2005 that his organisation had enough powers to deal with the threat of terrorism. The Government is trying to introduce similar legislation to that which existed in the UK, but which failed to prevent the July bomb attacks. Australia has remained on a "medium" terror alert since 2001. The November 2005 arrests in Sydney and Melbourne of alleged terrorists were conducted under existing laws.

They could be applied retrospectively to anyone who trained with an organisation in the past that was not then a banned organisation, nor in conflict with Australia. Proof of crime is not required. There is not fair and adequate access to courts. Punishment could be heavier than for convicted criminals.

Detainees could be held incommunicado up to 14 days and not given details of why they are held. No legal professional privilege or confidentiality. No adequate judicial revue. Witnesses, family members or anyone "connected with" a terrorist act, whether it occurs or not, could be detained.

The above are just a few of many troubling aspects of the terror laws. For more information there are about 280 submissions critical of the legislation made to the current Senate Committee Inquiry:
http://www.aph.gov.au/Senate/committee/legcon_ctte/terrorism/index.htm
See especially the submissions from: The Law Council Of Australia, the Centre of Public Law (UNSW), the Regulatory Institutions Network (ANU), the Uniting Church in Australia, the Human Rights & Equal Opportunity Commission.
Other websites for further information: http://terrorlaws.org/ or
https://www.safecom.org.au/terror-home.htm
Endorsed by a range of organisations, coordinated by the Social Justice Network. Contact Gavin (9266 4304) or Colin (9443 9093).