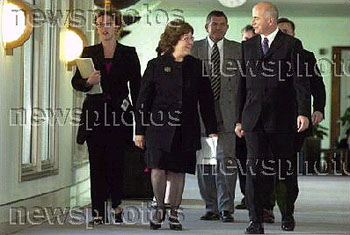 Carmen resigns: ALP's Dr Carmen Lawrence on her way to the Press Conference on December 5 2002, on her resignation from the ALP front bench. With her are staffer Jo Fox, ALP Senator George Campbell & MP Duncan Kerr. But there were many others with her.
Photo: Michael Jones, Newsphotos.

End of an Era on 62 Wray Avenue

After twelve years of post-Tampa dissent, will an ALP 'apparatchik' replace independent and critical thought in Fremantle?

Amongst her constituents were the migrants who sailed into Fremantle from Europe following World War II.

Their numbers are fewer now, but Carmen would have known many of them personally. They would have told her about Mussolini, sharing their lament about the march of the Nazis. Some might have told horrific accounts of the atrocities inflicted by Hitler and his henchmen in their beloved mother country. Many of them would have been unacknowledged refugees.

This article, written as an opinion piece by Project SafeCom's Jack H Smit, is available below as a downloadable PDF file.

Those first-generation migrants would have watched John Howard's SAS troops storm Arne Rinnan's MV Tampa in 2001 with horror. They deeply understood the definition of 'persecution' and 'seeking asylum' from first-hand experience, and they would have applauded Carmen Lawrence when she ended her political career prospects by quitting the front bench in late 2002. Carmen told reporters that she 'hated' her party's acquiescence with Howard's Tampa laws, and she expressed dismay about the encroaching vacuousness where daily media management and poll-driven policy development trump issues of principle, political ideals and values. She accused Labor of playing along with Howard's moral panic over boat people and she openly deplored Labor's submission to Howard's populist and racist politics, condemning Labor's failure to fiercely oppose his extremist conservative agenda.

My own activism dates from those Tampa days. As I learnt more about the rarefied atmosphere of Canberra's political cocoon, I began to compare Labor's acquiescence to Howard's panic to a dysfunctional, violent marriage, where the man keeps bashing up his wife, who is terrified and petrified, becoming so enmeshed and immobilized that she is incapable of finding an organised escape to a safe shelter.

Since Tampa, that devil's dance between conservatives and Labor has continued unabated. Of course it has. With Labor's principled positioning eroded, Australia's conservative bullies can inflict electoral extortion on their opponents at will, and its death spiral has intensified to ever-more extreme levels. While Lawrence lamented the out-of-sight, out-of-mind Christmas Island detention, we now dump refugees on Nauru and Manus Island. Countless laws, passed with Labor's acquiescence and, as time went on, its full support, have ensured total operative secrecy while placing those who dare come here by boat outside the reach of lawyers, personal safety guarantees and UN rights protection.

We practice a hideous, merciless regime of virtual torture by permanently jailing boat people. For up to 30,000 who came asking for help since 2007, we have destroyed the laughter and mental health of families. We stole the freedom and happiness of their children. Since the 2013 election, 15 people have tried to escape detention by killing themselves - or died directly as the result of our policy. Many others, including very young children, have desperately 'tried suicide'.

Before her 2007 retirement from politics, Dr Lawrence facilitated the entry of her successor Melissa Parke who is now retiring. A former UN lawyer, in office Melissa did not bury international law principles and UN Conventions under the festering political dung littering our Parliament. Just two weeks ago, in her valedictory speech in Parliament, Parke said:

"The war on people smugglers, accompanied by a faux concern for drownings at sea, has facilitated the profound deterioration in Australia's treatment of asylum seekers and refugees, our compliance with international human rights obligations and our own image of ourselves as a nation of tolerance, egalitarianism and the fair go. The present offshore detention system is a festering wound that is killing people and eroding our national character and reputation. It needs to be healed."

Labor has endorsed Josh Wilson for Fremantle, who learnt his political craft as a staffer for Carmen Lawrence and Melissa Parke. A few months ago he was part of nationwide #LetThemStay protests: thousands condemning our offshore camps, insisting the gulags are no places for children. But now, he immediately expressed unflinching support for dumping refugees offshore and secretly pushing back the boats. During the press conference, he obediently mouthed Labor's infamous 'saving lives at sea' words.

Wilson wants to become a career politician. If he makes it, 62 Wray Ave will be sterilized for the party machine man. Soon the memory of Wilson's former bosses will be erased, and he will not be unhappy about it. But Carmen's warnings about the march of the apparatchiks will resonate in the suburbs and with Melissa Parke the birds will whisper 'faux concern', 'faux concern', 'faux concern'.

1 January 2007: The Gifts of Carmen Lawrence - The number of contributions from Carmen to the national debate, also but not only about Australia's treatment of refugees and asylum seekers, has kept growing, also on our website - this was the reason we constructed this page to bring all pages, all gifts from Dr Carmen Lawrence together.

4 August 2003: Dr Carmen Lawrence, Fear and Denial in Public Policy - "Fear always serves the real elites - as opposed to those concocted by the conservative commentators; the privileged who throughout history have claimed to be uniquely positioned to identify the "dangers" from which they must protect us - witches, Jews, blacks, Muslims, communists, terrorists, illegals. Fear sells and it gets people elected."