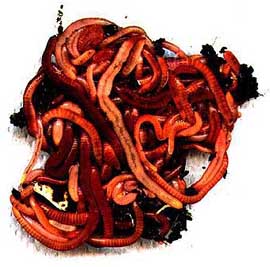 The Wormfarm: using vermiculture as fertilizer

Getting Redworms (Eisenia fetida) to work as fertilizers as well as recyclers...

Vermiculture is the practice of cultivating 'creepy-crawlies' in order to help them break down organic household waste.

The power of for example redworms (Eisenia fetida) is staggering, and many people now own a "worm farm".

In principle, a worm farm can handle kitchen waste, newspapers, and even egg cartons.

With Local government approvals and endorsements now on the increase, many systems also handle human waste from the toilet, which normally would end up in your sewerage systems.

Anybody can start a worm farm in a large rubbish bin. Even bigger systems are reasonably priced: many households use the old defunct sceptic tank, still buried in many gardens and backyards.

The unseen worm, who has been quietly aerating, tilling, and fertilizing the soil for centuries, is truly our partner in the fight to save the environment.

In the past 50 years, mankind has destroyed the worm habitat in an effort to "improve" agricultural efficiency. The use of chemical fertilizers has increased the salinity of the soil, making it unpalatable to our worm friends. Pesticides, in turn, kill indiscriminately, destroying "the good" with "the bad". As if that wasn't enough, over-tillage of the soil destroys the worm tunnels that are vital to their efforts.

Meanwhile, worms across the planet continue to faithfully fertilize and aerate the soil despite our ungrateful attitude. They even offer to help us out of our problem with organic waste... and yet, the world turns its back. Rotting organic waste in our dumps is polluting our underground water supply. Worms are ready to eat that organic waste and give us fertilizer in return. Its a deal that humanity cannot afford to pass up.

Growing worms is a meditative activity that will not only save the environment, but will also help decrease stress. Besides that, they will help you grow a wonderful garden.

Worms are so wonderful... they live with this simple purpose in mind - to eat compost, excrete worm castings, and reproduce themselves by the thousands.

Two pounds of worms, approximately 2000 of them, will eat one pound of compost every 48 hours. Worms eat coffee grounds, table scraps, melon rinds, newspaper, etc. They even like small amounts of cow dung to nibble on. Their favorite dish seems to be coffee grounds mixed with ground up apples or carrots from a juicer.

Mother earth is already on the slippery slope to ecological disaster. With the depletion of vital nutrients in our soil level and the over production of crops, the ability of the soil to regenerate and heal itself lessens each year. Unless we put back in to the earth what we have taken out, the soil will degenerate more each year and our food supply becomes less nutritious. We need to get back to basics and help rebuild the soil. We can't just think about it any longer, we must act now!

What are we doing wrong? On a grand scale, in order to meet the high demand for a variety of foods, the same crops are planted in the same fields year after year after year. Crops should be rotated. On a personal level, with our busy lives we have eliminated a very basic but necessary step. We throw our vegetable and fruit peelings and other food waste away instead of recycling, composting or vermicomposting it. When we throw food waste down the garbage disposal or send it to a landfill, we disrupt nature's life cycle process.

Since 1996, VermiCo has been pleased to provide a wealth of information and products to thousands of people worldwide wanting to know more about earthworms and their many uses. We have discovered that there are many different types of interest in vermiculture (breeding earthworms) and vermicomposting (converting organic waste into worm castings - a valuable soil amendment that acts like a bio-fertilizer and bio-insecticide).

Worms do the work twenty-four hours a day. It's easy and fun, too! All you have to do is save your fruit and vegetable scraps and other organic waste and feed the waste to red worms (Eisenia fetida).

Worm Farm Waste systems are a simple natural way to process garbage, sewerage and kitchen waste into a clear aerobic liquid which is absorbed into soils better than septic liquids due to the worm activity and natural occurring organisms opening up the soil. This process is similar to that which occurs on the rainforest floor.

The Can-O-Worms is an odourless, user friendly system that allows anyone to participate in recycling. Whether you live in an apartment or have a backyard, you can reduce waste and produce organic fertiliser for indoor plants and your garden with very little effort.

Facts about How to Build a Worm Farm - Maryland Department of the Environment.