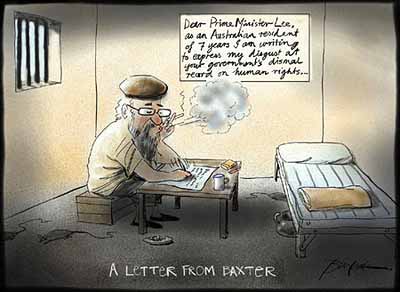 This is a page for the latest news from Australian and West-Australian action and initiatives in dealing with the Terror laws. You can return to this page to see what's new and what's news.

Image: Thanks to Bill Leak and The Australian.

Although we're no longer updating this page, there's still plenty to see and plenty to do here - so we've left the page intact.

There are links on this page to news and updates, including summaries and links to other pages, added to this ORANGE section, but not linked from other pages.

2 November 2008: Mamdouh Habib, My Story: The tale of a terrorist who wasn't - For the first time, Mamdouh Habib reveals the full story of his journey to hell and back. He exposes the complicity of the Australian government in his abduction and maltreatment, as well as its subsequent neglect of him while in Guantanamo. He also describes his encounters with other well-known alleged terrorists, including his meetings with David Hicks both in Afghanistan and in Guantanamo. "Everyone had terrible stories to tell ... catching foreigners was big business. It didn't matter if they were terrorists or not, the Pakistanis told the Americans that they were anyway."

3 January 2006: Human Rights Watch on the Anti-Terrorism Bill - "In order to protect freedom of expression, "urging" action must not be criminalized unless it is directed at inciting imminent lawless action, is likely to incite such action, and if those listening are likely to take action in response to the urging."

2 January 2006: ASIO's Terrorism Powers and the Implications for Democracy - Sandra Fonseca from Reportage writes: The amendments to the Australian Security Intelligence Organisation Act 1979, which have bestowed unprecedented powers upon the Australian Security Intelligence Organisation (ASIO), are amongst the most concerning of the Howard government's legislative initiatives to counter terrorism.

18 December 2005: Terrorlaw speeches by Bob Brown and John Faulkner - "...it is very important that people looking back on this moment know that the opposition caved in, to a government with a one-seat majority, to taking away Australians' rights without any return defined in terms of security and to eroding those rights - the right to free speech and the right not to be held without charge, trial or the ability to have a defence."

17 December 2005: Warning: this page may contain seditious writings - Read the information on this page by all means - but if you do, you may be charged with sedition under Australian law. You may even be charged by association - and you may not be told when you get arrested why you have been arrested.

15 December 2005: ALP leaders Barry Jones and Carmen Lawrence on the Terror laws - The Australian Labor Party under the federal leadership of Kim Beazley did not cross the floor on the passing of the Terror laws in Federal Parliament - and while we think they owe some serious answers about this to the Australian electorate.

4 December 2005: Human Rights and Responsibilities in the Age of Terror - "The fact that the Government, with the support of the Opposition, has moved so far away from the Rule of Law demonstrates the fragility of our grasp of a liberal, democratic society. If we stand silent in the face of discrimination and in violation of the basic principles of humanity, then we betray our way of life." Former Prime Minister Malcolm Fraser delivers the 2005 University of Melbourne's Chancellor's Human Rights Lecture.

30 November 2005: Three remarkable speeches in reply to the Anti-terrorism Bill No 2, 2005 - from 29 November 2005. The first speech is by Senator Marise Payne (NSW) who also chaired the Legal and Constitutional Legislation Committee's Inquiry into the legislation - and she spoke on the presentation of the Committee's report in the Senate. Marise Payne's speech is followed by two Second Reading speeches in the lower House - by Hon Simon Crean and Mr Peter Andren.

30 November 2005: The WA State ALP Conference - On the weekend of 26/27 November 2005 the State ALP Party Conference took place in Perth. Delegates of the WA Anti-terrorism legislation Action group attended the conference and engaged the delegates, with a degree of success. Colin Penter of the WA Social Justice Network reports, followed by the motion that passed and an extract from the ALP Policy. This report is followed by the text of a flyer distributed at the time in Perth and Western Australia.

19 November 2005: Tony Kevin: The subversion of Australian Democracy - Under the new laws, it is possible that while we sit down to our Christmas dinners, Australian terrorism suspects will have been secretly rendered to offshore preventative detention on Christmas Island, effectively beyond reasonable defence lawyer access and the protections of Australian law.