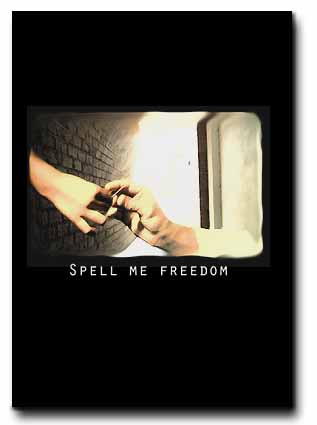 A remarkable movie debut by media students and refugees from Perth

From a collaboration between media students and refugees comes a sharply crafted short story of life in Australia's detention camps and its darkest side: lip stitching, drinking shampoo, the desperation of life inside and the dilemma of an escape, followed by the inevitable post-traumatic flashbacks.

Spell Me Freedom is an amazing outcome of the truly felt emergency on the part of director Dean Israelite - a South African resident studying in Perth - with Australia's detention policies, and a sometimes raw and graphic capture of essential moments describing the horror of the camps.

In the just seven minutes the movie itself almost becomes a series of flashbacks, and the director shows a highly skilled use of working within the limitations of a low budget.

The fact that Israelite was successful in completing this project, which must include a mention of his success in completing the journey of collaboration with his production team as well as with refugees Ali Hussaini and Reza Sadiqi - with their respective roles as Imran and Samir's voice in the film, is itself remarkable: Spell Me Freedom signifies a first for an Australian movie where refugees as actors build, re-build and tell the story that should be told again and again to an Australian and international audience.

"I think it is a terrific film. It moved me. It had a truth about it. The subject is so important - vitally important and nationally important because it exposes the fundamental sham of our "fair-go" democracy. I'm not sure, but I think it may well be the MAIN, the BIG issue."

"[The film is] well put together, and it makes a nice point very economically. Congratulations: it is a well-made and timely film."

About the publication Dean Israelite, Spell Me Freedom: This book is now out of print, and we no longer supply it to our members or to the wider public. We suggest you could search for online second-hand bookshops to secure your copy.

The DVD is available in the common "-R" or the "minus R" format, and while most Australian DVD players are capable of playing this format, please check to ensure that your DVD Player can play this format.

Available exclusively from us! Scroll down the page or click on the red button below.

Click on the thumbnails throughout the text below to open some full-size sample images of the movie.

At the time of the movie release Director Dean Israelite was interviewed by Propel Youth Arts, and a review was included on their website (no longer active). Israelite is now an established film director - click here for a Wikipedia biography.

Can a place be so horrific that one can leave a friend behind?

Imran, an escaped Asylum seeker, must choose between those he left behind and that which lies ahead - a devastating choice for a refugee in contemporary Australia.

Spell Me Freedom is a story about two refugees, Imran and Samir, who find the courage to escape from a horrific detention centre 360km north of Perth city. In the chaos of the escape, only our protagonist Imran manages to flee, leaving his friend and comrade still captive within the walls of the refugee camp.

The film then follows Imran as he explores his newfound freedom and remembers in startling flashbacks everything that has led him to this moment. It is through these flashbacks, that Imran not only remembers Samir but the unbearable life that is destined for one locked up in an Australian detention centre. The film's major thrust then is the choice which Imran is forced to make, between finding salvation in a newfound freedom seemingly devoid of any comfort or returning to his comrade Samir and so a life of detention.

This decision comes to the fore by the end of the film, as Imran finds himself on the path back to the refugee camp. Whilst he walks, he remembers an episode of absolute horror, one which serves as the epitome of the suffering and struggle that he and Samir were forced to endure.

With the film Spell Me Freedom, we as filmmakers strove to highlight the atrocities endured by those seeking asylum in Australia. Our aim was indeed to reflect the pain and torment, both physical and emotional, which is inflicted on countless refugees in Australia. The story really follows one man as he continues to endure a psychological breakdown in his search for freedom, salvation and truth.

Although fictional, the film maintains its authenticity through the experiences, influence and participation of real asylum seekers. Ali Hussaini, who plays the role of Imran, arrived by boat from Indonesia in 1999 and spent four months in Port Hedland Detention Centre. Ali brought his own experience to every scene, having had no formal acting training whatsoever. Hussain and Reza Sadiqi, two asylum seekers from Afghanistan, were both influential in the final outcome of the film, since they shared their stories, insights and criticisms about the script through a workshop process.

Hussain Sadiqi arrived in 1999 by boat from Indonesia, spending 6 months in Port Hedland Detention Centre. His younger brother Reza arrived when he was just 17 in November of 2001. He spent two and a half years in detention, serving time on Christmas Island, Nauru and in Perth Immigration Detention Centre. It was through constant collaboration with all three of these men, that the script was constantly scrutinized and shaped. The screenplay had always been based on research but once the film became a collaborative work, it was infused with a human truth that is indicative of films of its social realist nature.

As filmmakers however, we were still faced with the dilemma of crafting a film in which this pain, torment and confusion had both narrative and visual poignancy. In a narrative sense, we felt that this may be achieved by manifesting all of the pain and torment in a single decision. It is that decision then that became the major thrust and message of the film. Imran must choose between returning to his comrade and thus a life of detention or remaining free in a world he does not understand. Both options are dire for Imran and it is the fact that he cannot will himself to return to his comrade and friend that displays emphatically the torture that encompasses one's life within an Australian detention centre.

In his book Night, Ellie Wiesel explains how when imprisoned with his father in Auschwitz, he felt a cold sense of relief and release once his father died. It is through a moment as honest and poignant as this that Ellie Wiesel is able to express how traumatic a Nazi death camp can be, that one feels freed once one's own father is no longer a concern. Similarly, Spell Me Freedom strives to exhibit the same sort of human agony in which Imran is willing to sacrifice a friend, not for a life of joyous freedom but simply for a life free of a detention centre.