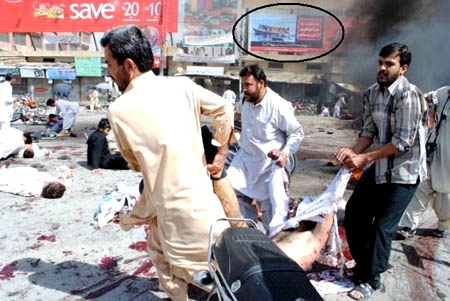 Scene at a market square in Quetta, Pakistan, after a bombing attack targeting Hazaras. In the picture (circled) is an Australian government anti-refugee poster

A Suicide Bomber in Quetta

For Hazaras, it's bad enough being stuck in Quetta, Pakistan, when staying home in Afghanistan is too dangerous.

For many, the Taliban targets their family or village.

Others are at risk of becoming trapped in the crossfire of the Afghanistan war against the Taliban.

Things get worse if you then get targeted in Quetta. Recent - and reported - examples provide evidence of a sharp increase in targeted killings of Hazara in Quetta: a recent attack saw dozens of Hazaras killed in one such attack. Many Hazaras are now fleeing to Peshawar.

Below are three recent photos of one such incident in Quetta. As people are cleaning up the bodies, they do so against the backdrop of an Australian Government poster, depicting "a leaky boat" and warning people not to try to come to Australia in "the illegal way" (poster is circled in the images).

The images are from the attack at a Shia Muslim rally at Meezan Chowk in Quetta on September 3, 2011 that killed 42 and injured 80 people. The media report following our press release is also included on this page.

Australia's callousness is made larger when you realise that you won't get anywhere with the Australian Embassy in Pakistan or Afghanistan, that UNHCR is underresourced, overworked and often inadequate, if not inappropriate. With dozens of Australian compliance officers at international airports tasked to stop anyone from boarding who intends to apply for asylum "in the legal way", Australia has any "loopholes" firmly closed.

Below are three photos of the devastation following the bombing in Quetta. The Australian poster is visible in all three pictures. Click on the images to open the full-size versions in a new window. 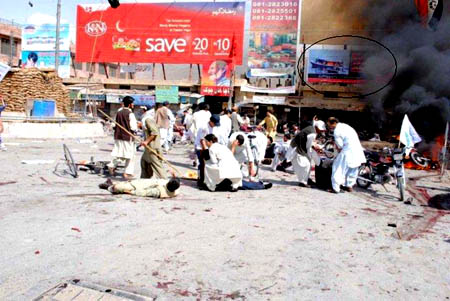 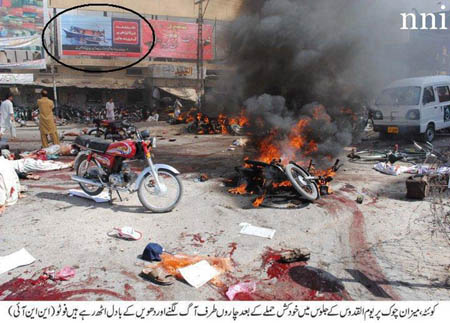 Human rights and refugee advocates have slammed as callous billboards in the Pakistan city of Quetta warning people not to come to Australia by leaky boat.

One of the billboards is seen clearly in the background of pictures shot in the aftermath of a September 3 attack on a Shia Muslim rally that killed 42 people and injured another 80.

Jack Smit, from the WA group Project SafeCom, said Hazaras who had escaped persecution in Afghanistan by fleeing to Pakistan were being targeted.

"Recent and reported examples provide evidence of a sharp increase in targeted killings of Hazara in Quetta," Mr Smit said.

He said photos of a recent incident in Quetta showed people cleaning up the bodies of others killed in a suicide bomb with an Australian Government billboard in the background warning people not to come to Australia in "the illegal way".

He said getting to Australia legally was almost impossible.

"Australia's callousness is made larger when you realise that you won't get anywhere with the Australian Embassy in Pakistan or Afghanistan, that the United Nations Refugee Agency UNHCR is under resourced, overworked and often inadequate, if not inappropriate," Mr Smit said.

A spokesman for Customs and Border Protection said the poster was part of a campaign that ended in mid 2010 but many of the billboards had remained in place.

"On behalf of the Australian government, Customs and Border Protection leads and refines the implementation of counter people smuggling communications campaigns in source and transit countries.

"In 2010-2011, we implemented campaigns in Afghanistan, Pakistan, Sri Lanka, Malaysia and Indonesia to discourage and deter potential irregular immigrants and crew from becoming involved in people smuggling activities," the spokesman said.

"Customs and Border Protection conducted this advertising campaign immediately after an April 2010 policy announcement by the Australian government regarding the temporary suspension of the processing of Afghan and Sri Lankan asylum claims.

"The aim of the campaign, which lasted for three months, was to ensure that the government's policy announcement reached source communities. Although the campaign ceased in mid-2010 some of the campaign posters are still in place.

"To deter and dissuade potential irregular immigrant communities in source and transit countries from embarking on a maritime voyage to Australia, this banner advertising also conveyed messages about the dangers and risks of such a voyage."