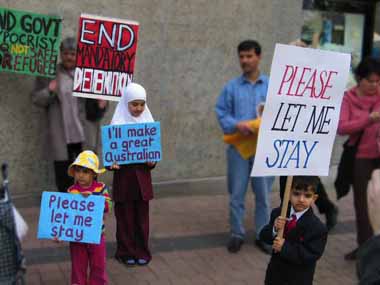 Why don't you let us stay? Also children protest against Temporary Protection Visas (TPV's). This image taken outside Australia House in London

In Psychiatry, Psychology and Law, Nicholas Procter calls for the structure of individual mental health support to be built around the processes of seeking asylum and coping with rejections and setbacks during the processes attendant upon applications for refugee status.

He contends that the function of supportive mental health counselling during migration agent/lawyer consultation has the potential to help Temporary Protection Visa holders cope with the processes and help to build needed resilience in face for the potential for rejection, fear, frustration and disappointment.

1 August 2004: Nicholas Procter: Paper plates and throwaway cutlery - Working with some of the most marginalised of mental health consumers - asylum seekers released from immigration detention centres and living in rural South Australia - Nicholas Procter makes a cogent case for a return to practical strategies in this paper, subtitled "Aspects of generating trust during mental health initiatives with asylum seekers released from Immigration Detention Centres."

28 October 2004: Procter: From 'temporary' to permanent' Protection Visas - Nicholas Procter argues that It's Much More Than a Quick Political Fix. "If TPV holders already disoriented by trauma, sometimes years of detention and then the relentless insecurity of temporary status in Australia, find that once again they are facing mixed messages, it will be disastrous. Trust is a fundamental requirement for mental stability..."

Nicholas G Procter [RN PhD] works as Associate Professor at the School of Nursing and Midwifery at the Division of Health Sciences, at the University of South Australia.

In this paper the author calls for the structure of individual mental health support to be built around the processes of seeking asylum and coping with rejections and setbacks during the processes attendant upon applications for refugee status. He contends that the function of supportive mental health counselling during migration agent/lawyer consultation has the potential to help Temporary Protection Visa holders cope with the processes and help to build needed resilience in face for the potential for rejection, fear, frustration and disappointment.

On the basis of four years developing clinical response plans on depression and suicidal thinking for people released on three year Temporary Protection Visas (TPVs) from Immigration Detention Centres across Australia (Procter, 2003 and 2004), I have come to appreciate the therapeutic merits of an integrated mental health promotion and suicide prevention activity that is inclusive of migration agent/lawyer consultation. Beginning with a selective review of the nature of suicide for migrants and refugees, I will argue that the structure of individual mental health support should be built around the processes of seeking asylum and coping with rejections and set backs during lengthy and at times complex legal processes. Similarly, the function of supportive mental health counselling during migration agent/lawyer consultation has the potential to help TPV holders prepare for the "next stage" of their (application) journey, helping to build resilience and understand personal reactions to (for example) rejection, fear, frustration and disappointment.

While asylum seekers frequently face periods of suffering and periods of calm, individual suffering has become increasingly intolerable at times of re-interviewing and rejection of refugee claims by the Australian Department of Immigration, Multicultural and Indigenous Affairs (DIMIA). If national trends continue, a substantial proportion of TPV holders will have their applications for a Permanent Protection Visa (PPV) rejected in the next few years; they will be told to make arrangements to return to their place of origin within 28 days or lodge an appeal with the Refugee Review Tribunal (RRT).

More recently the onset of TPV review interviews for PPVs in South Australia has revealed new information about the way asylum seekers experience their current existence and the impact previous trauma has upon everyday life. The uncertainty of their existence and strongly held beliefs that it is unsafe to return to their country of origin has taken an enormous physical and psychological toll on some. This was highlighted in a very profound way in February 2003 when Dr Habib Vahedi, a TPV holder, hanged himself from powerlines after receiving a letter from DIMIA requesting him to return to Afghanistan. His suicide note blamed "mental pressure" (Ashford, 2003). This was an educated man, a physiotherapist with a good command of the English language, a stalwart of a group of approximately 80 located 70 km from Adelaide in the town of Murray Bridge. His death exposed the depression and hopelessness many of these men feel.

In the months following Dr Vahedi's death, the men detained in the same conditions as he had been remained silent, fearful that anything they said could adversely affect their visa status. Concern about speaking out has now been overtaken by desperation and a sense of having nothing to lose.

When people arrive to Australia their application for asylum is considered in light of the information they can supply and any facts known about the country they are fleeing. Some people in detention and at times of re-applying for permanent protection suffer a denial of credibility due to inconsistencies of their story and this may lead to claims being dismissed on grounds of minor discrepancies. This situation appears at times to have a flow-on effect whereby it is difficult for therapeutic trust to be developed between mental health provider and person in or released from immigration detention (Procter, 2003).

Mental distress and emotional disorders can and will impact upon the quality of information people can remember. Where the experience is highly traumatic (for example, a situation involving serious injury to the person) the situation is considered even more complex. There may be important differences between traumatic and non-traumatic memories. For example, initial recall of traumatic events by people with post traumatic stress disorder typically does not involve normal narrative memory. In other words, the story of what happened may be fragmented and therefore appearing inconsistent. Recent research in the UK has found that people seeking asylum who have post-traumatic stress at the time of their interviews are systematically more likely to have their claims rejected the longer their application takes (Herlihy et al, 2002).

To make clinical mental health matters worse, there is no way of knowing well in advance the precise date and time when interviews to assess claims, invitations to interview or rejection letters will arrive, what questions will be asked or what will be the primary data source used to determine whether a homeland country is safe to return to. The level of distress reported among TPV holders is significant. A recent report revealed that applicants for refugee status placed on TPVs have a 700 per cent increase in risk for developing depression and post-traumatic stress disorder compared to refugees with PPVs (University of New South Wales Media Release, January 30 2004).

Also significant as a background issue is the knowledge that suicide by people born overseas represents 25% of all suicides. Of these, 60% are by people from non-English speaking backgrounds (Cantor, 2000 et al; Hassan, 1995). While suicide is not a mental illness (rather, it is a behaviour), it is strongly associated with mental illness, and the risk factors pertinent to both mental illness and suicide for TPV holders are overlapping and interrelated. Thus, the issue of mental health support and suicide   prevention necessarily requires an integrated prevention response which acknowledges both the separateness of mental illness and suicide, and the association between the two.

All reviews for PPVs in South Australia are handled through the DIMIA's Melbourne office. During 2003 there were only 2 blocks of time (August and November/December) when interviews were undertaken. The fragmented way reviews are being undertaken leaves many TPV holders disillusioned and   suspicious of the processes and sceptical of the outcome. Knowledge of these and other stressors impacting upon TPV holders is important for both mental health professionals and migration agents/lawyers because prevention of mental health problems, mental illness and suicide for asylum seekers should incorporate:

Fundamental to the delivery of clinically relevant integrated services will be appreciation of the way in which cultural beliefs guide and inform communication of health problems, the way symptoms are presented, the way stressors are received and when, how and why help is sought and evaluated.

The nexus between mental health need and migration support and advocacy is an increasing feature of a co-ordinated response to assist TPV holders cope with their situation. Up-to-date information about individual claims speaks to the urgent need for coherence and that support is available. For this reason, it is recommended that TPV holders who are given individual mental health assistance have this provided in conjunction with and during their migration agent/lawyer consultation. Indirect questioning and more attention being given to asylum seekers' expression and explanation of personal narrative, metaphor and symbolism will help articulation of feeling and promote a caring, supportive framework. This framework can provide an important backdrop for feelings to be received, lives revealed and cultural injunctions towards building resilience in order to continue moving forward through legal processes.

The structure of supportive counselling during and after migration agent/lawyer consultations should be built around the processes of seeking asylum and coping with rejections, frustrations and set-backs during what is frequently a lengthy legal process. Similarly, the function of supportive counselling will help TPV holders prepare for the "next stage" of their (application) journey, helping to build resilience and understand personal reactions to (for example) rejection, fear, frustration and disappointment. Mental health support with migration agent/lawyer consultation will:

In addition to these matters, individual mental health support and migration agent/lawyer consultation can be conducted to match the asylum seeker's pace of learning what practical help is needed to advance legal processes. This is particularly suited to TPV holders who, due to their length of time since being released from immigration detention, cope poorly with re-interviewing by DIMIA and struggle to attain new ways of coping; such issues can be difficult for both counsellors and migration agent/lawyer. This is particularly important for TPV holders who are contemplating suicide, suffering from poor concentration and who may be distracted by the complexity of interactions that can take place in group settings.

Finally, individual mental health support and migration agent/lawyer consultation may be useful for individuals who feel they need to differentiate themselves from others in group situations in order to feel   they can be understood and helped - for example, those who have different political views or English language skills better than those of other asylum seekers.

The provision of adequate resources in the form of the delivery of clinically relevant integrated mental health support services is fundamental to prevent risk to applicants for refugee status. Continuity and integration of mental health care and migration agent/lawyer consultation is best achieved by bridging discrete elements in the asylum seeker journey through preparing for visa appeals, DIMIA reviews, news from home and ongoing psychosocial stressors - in the context of different episodes, interventions by different providers, and changes in mental distress. Another important factor is input from supportive networks that build resilience intrinsically over time, such as sustained supportive interpersonal relationships, and therapeutic care plans. To help strengthen continuity and integration of mental health supports for TPV holders, well resourced care must be experienced as connected and coherent. Fundamental to this will be the ability to synthesise different viewpoints to create workable solutions. One way to achieve this task is to bridge the nexus between mental health support and migration agent/lawyer advocacy and consultation.