a Forum at Kulcha, Fremantle 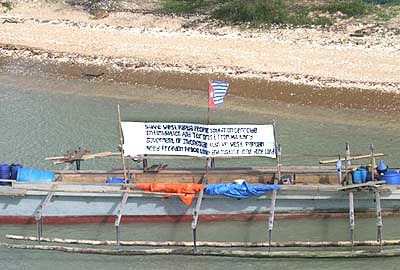 23 April 2006: TAPOL Human Rights Bulletin 181 (West Papua) - It seems that since December 2005 things are starting to escalate around West Papua, so it's not surprising that TAPOL dedicates a large section of this December Bulletin to the issues in Papua.

10 April 2006: Pieter J Drooglever, An Act of Free Choice? - the Papuans of Western New Guinea and the limitations of the right to self determination. An English summary of the Dutch Government-commissioned report into the handover of Irian Jaya to the UN under the New York Agreement in 1962 and the Indonesian - and stacked - Referendum of 1969.

31 March 2006: The Secret War Against The Defenseless People Of West Papua - "If the history of human rights is not the history of great power's impunity, the UN must return to West Papua, as it did finally to East Timor." Essays and writings by John Pilger, Clinton Fernandes and Marni Cordell.

4 February 2006: Rallying for the Papuans - Photo Reports from around Australia - Within a week of the 43 Papuans arriving near Weipa in Queensland, Australians voted with their feet, and rallies were held in several states. Here are the photos from Melbourne, Sydney, Darwin, as well as some images taken on Christmas Island.

22 January 2006: Inside the Grasberg Mine: an exasperating New York Times key feature investigation on West Papua's Freeport Mine. Published in December 2005, the article is already found on dozens of locations on the internet, and perhaps it's a study that will break the stranglehold on a situation that's both environmentally unsustainable, politically corrupt and an abhorrence in terms of human rights and ecological responsibility.

21 January 2006: Raise the Flag and Cry Merdeka - The first traditional Papuan boat, a canoe with outriggers, arrived on Australian shores this week from West Papua. The heat is on the Howard government especially because the Indonesian government allegedly embarked upon "revenge attacks" against family members of those who made the journey. This is a background briefing on the issues at stake.

On 16 January 43 asylum seekers from West Papua arrived near Weipa in Queensland, fleeing their home country.

Even while the International Commission of Jurists as well as many other groups and organizations around Australia stated that they are genuine asylum seekers, that they came to the country nearest to them in accordance with the UN Refugee Convention and that they did not come using people smugglers, and therefore that they should live on Bridging Visas in the community and treated as our neighbours like the East Timorese, the Australian government locked them up - and away - in the Christmas Island detention centre and in houses on the island.

DIMIA also announced they had started an investigation into involvement of "people smugglers" and on the same day they burnt the traditional boat, a canoe with outriggers - the "incriminating item" itself that could "implicate" the so-called people smugglers...

Has anything changed since Tampa?

Has DIMIA learnt its lessons from the Cornelia Rau and Vivian Alvarez scandals?

Does the government treat refugees with the respect they deserve?

What is the problem in West Papua?

Why is the Indonesian government calling any refugee claims by these men, women and seven children "baseless"?

What happened in West Papua since the Dutch in 1962 relinquished control to the Sukarno government of their colony?

What was the "Act of Free Choice" and will West Papua ever become independent like East Timor?

Why did the Cairns Chamber of Commerce issue a press release urging the government to treat these asylum seekers in a "hard-lined" way?

Come and find out the issues behind this extraordinary journey of 43 men, women and children, from Senator Kerry Nettle who flies back from Christmas Island on this very day, from Kaye Bernard who has some experience with DIMIA when she lobbied for the Vietnamese refugees, and who was on Christmas Island; from refugee advocate, lobbyist and activist Jack H Smit, who remembers the days of the Dutch hand-over of West Papua, and from Ned Byrne, who travelled in West Papua and who met some of the people and families in 2002 when he was there.

"The voice of West Papua must be heard, it has been silenced for 45 years", West Papua solidarity activist Ned Byrne told a crowd of 140 people who packed into Fremantle's Kulcha venue on January 31.

Nettle was barely off the plane, having visited Christmas Island to meet with the West Papuan refugees. "This long, costly journey hides the ugly face of mandatory detention", she told the meeting.

News of the many Australian protests and meetings of support gave the refugees great heart, Nettle said.

Bernard spoke of her struggles to assist the Vietnamese refugees imprisoned on Christmas Island in 2003. Bernard cited an example of the cruelty such detention entails: A pregnant Vietnamese refugee was repeatedly flown to the mainland for obstetric treatment. "She travelled about 20,000 kilometres - some kind of bizarre record for longest distance flown during a pregnancy."

Smit said that human rights were being sacrificed to economic and political goals, highlighting the links between the Australian and Indonesian governments, and the business deals between the owners of West Papua's Freeport mine, the Indonesian military and some Australian companies.

Retired Dutch Air Force officer Kees Faas described his involvement in military activities in West Papua in 1961, and how his unit received last-minute orders from the Dutch colonial authorities not to repel invading Indonesian aircraft.

Byrne, a teacher and activist in the Australia West Papua Association, said that earlier in the day he had managed to speak by telephone with West Papuan activist Pastor Rom. Unable to escape themselves, Rom and his wife sent all their children on the boat to Australia.

Byrne said: "I asked: Why did you send your only 3 children on such a perilous sea journey? Rom answered: "To save them from genocide - without the West Papuan people there can be no free West Papua."

According to Byrne, Rom described the situation in West Papua as "critical and dangerous, on the edge of war". Rom said there was a massive military buildup occurring, with tanks patrolling cities and towns. He claimed that the Indonesian army is establishing jungle encampments.

Greens Senator Kerry Nettle received a warm welcome when she finally managed to get to Christmas Island on January 28-30 to visit the 43 West Papuan asylum seekers and a family of West Timorese being held there. NSW Greens immigration spokesperson Max Phillips, who accompanied Nettle, told Green Left Weekly that it seemed like half the town had turned out to greet them.

"When we arrived at the community housing, there were a couple of West Papuans on the verandah of the house occupied by the West Timorese family, but no sign of Global Solutions Ltd (GSL) guards." Phillips wondered whether this hands-off approach was because politicians from the Joint Standing Committee on the National Capital and External Territories were also visiting the island.

Phillips said the West Papuans were "very excited" to see photos of solidarity rallies in Sydney and Melbourne calling for the government to grant them asylum in the days following their boat's arrival. "Before that, they had no idea that Australians knew about them and supported their struggle", Phillips said. They were "ecstatic", Phillips said, to see a photo of their boat with its banner from one of the newspapers. The banner had been strung from the boat in the hope that their asylum message would reach the Australian people.

Nettle and Phillips discovered that the West Papuans had been travelling for six weeks, not five days as initially reported. They began their voyage on the mid-north coast of West Papua, where Herman Wainggai's father had helped make the dugout canoe. They navigated the coastline of West Papua, stopping along the way for food and fuel. At one point, they drifted off course towards Ambon, which they were fearful of reaching because of the numbers of Indonesian troops stationed there. They also had to contend with big seas and high winds.

One of the young men told Phillips of their fear when they were hauled into a Hercules plane after reaching Australia. They thought they were being returned to Indonesia, but they were taken to Christmas Island. "They thought it must be just off the coast of Australia. We showed them a map, and they were horrified it was so close to Java", Phillips said.

Video footage of Wainggai arguing the case for protection was shown at a 120-strong public meeting in Fremantle on January 31 where Nettle spoke along with Ned Byrne from the Australia West Papua Association, refugee campaigner Kaye Bernard and Project SafeCom's Jack Smit. Videotaped messages from that meeting will be sent to Wainggai and the asylum seekers on Christmas Island.

On February 2, Byrne visited Yunus and Anika Wainggai, the father and daughter being held in Fremantle hospital. Both have been declared free of active tuberculosis, though Yunus has a non-contagious form of the disease.

Byrne told Green Left Weekly that Yunus, who was responsible for keeping the dugout's motor going, told him it lasted until their final leg from Merauke to the Torres Strait. They then drifted around for five days, collecting fresh water and dribbling it into the children's mouths. They also ran out of food, having expected the journey to take just 15 hours.

Byrne has been active in promoting the independence cause of West Papua since 1999. His brother-in-law, Jacob Rumbiak, now based in Melbourne, is one of the leaders of the West Papuan independence movement and a co-founder, along with Dr Thomas Wainggai, of the non-violent resistance in 1987.

Byrne is concerned that despite the Indonesian military repression in West Papua, the Australian government wants to sign a new security treaty with Jakarta. In 1995, then Labor prime minister Paul Keating negotiated a secret security pact with the dictator General Suharto. It was junked when the Howard government was forced to intervene to stop the carnage in East Timor in 1999.

From all reports, the new treaty is far more wide-ranging and is more explicit about the importance of non-interference in the internal affairs of Indonesia compared to the last one.

"They made the journey right on time", Byrne said, referring to the heightened public interest in and awareness about the struggle of the West Papuan people for their independence. Byrne is optimistic that this may force Howard to postpone signing the treaty with Jakarta.

Project SafeCom's Jack Smit is less optimistic. Indonesia's President Susilo Bambang Yudhoyono phoned Howard on January 27 asking for the return of the asylum seekers, and guaranteeing they would not be harmed. "It remains to be seen whether Howard will, behind the scenes, manipulate the outcomes of the visa processing under pressure from Yudhoyono", Smit told GLW.

Australian businesses have an interest in West Papua remaining open for exploitation. Soon after the asylum seekers' arrival, the Cairns Chamber of Commerce demanded the government adopt a "hardline approach". This is hardly surprising, as Cairns businesses are some of the biggest beneficiaries of the Freeport mine at Grasberg in West Papua - the largest gold and third-largest copper mine in the world. Cairns operates as Freeport's supply base, with direct flights to Timika. Cairns is also where many miners take their rest and recreation. West Papuan independence would mean the loss of $50-70 million a year for local Cairns companies. For Indonesia, it means a whole lot more: the Freeport mine is Jakarta's biggest corporate taxpayer, contributing an annual $192 million in taxes.