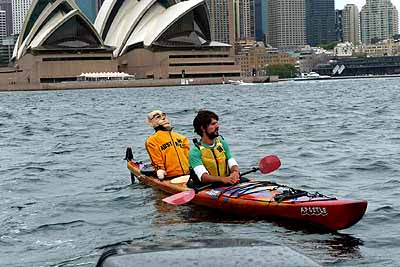 The 'Big John' (Howard) mascot gets his place at Kirribilli House

In the final leg of their journey, Dave Corlett and Simon Keenan "dump" on John Howard

"On Tuesday September 19 2007, at 11:00am, Dave Corlett and Simon Keenan symbolically landed their Big John mascot on home soil - right on the rock shelf in front of John Howard's official residence at Kirribilli House on Sydney Harbour."

"As the pictures show, Big John's Federal guards, employed by Australian Protective Services and Australian Federal Police weren't all that delighted, but Sydney Water Police were very interested in the epic 3-month sea kayak journey around the Immigration-Excised parts of Australia..."

"Dave Corlett and Simon Keenan finish their trip in Melbourne on Friday September 22 2007."

What's on this page:

On this page, a photo report of Big John's final voyage to Kirribilli House via Sydney harbour, aboard the kayaks of Simon Keenan and David Corlett, who peddled all around Australia's excision zone in the last three months. Also, links to other pages on our website related to the project, and some media reports on the journey. Don't forget to explore the links to the Excised Blog and the Paddling for Refugees website!

5 August 2007: E X C I S E D ! - Paddling The Excision Zone with David Corlett and Simon Keenan - Be part of a sea kayaking journey in and around Australia's 'excised zone' - those parts of Australia's north (including Christmas Island and Ashmore Reef) that have been legislatively cut off from the migration zone in order to prohibit any asylum seeker arriving there from applying for protection in Australia.

Here are some of the pics ... click the thumbnails to open the larger images. 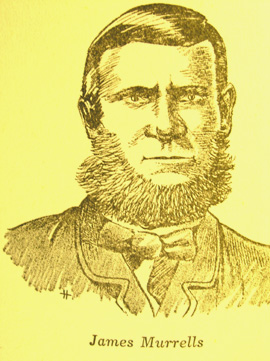 In 1846 when shipwrecked seaman James Morrill washed ashore at Cape Cleveland - just opposite Magnetic Island - the local Aboriginal people took him in as a returned (from the dead) member of their own society. Thus began a period of seventeen years for "Jemmy" of living with and being accepted and becoming a trusted member of the clan. But if "foreign" survivors were to be washed ashore today on Magnetic Island they may well be welcomed by the locals but government policy, which has excised Magnetic Island from the Australian migration zone, could still see them forcibly transferred to Nauru.

The hospitality extended by the Australians of this area in the far tougher, wilder time of 1846 contrasts sharply to today's law that, according to a group called Paddling for Refugees and Asylum Seekers (PRAS), means northern Australian islands, including Magnetic, have become places where asylum seekers cannot apply for protection under a process with an independent appeals mechanism or one subject to judicial oversight.

PRAS founder, Simon Keenan, and, author of Following them home: The Fate of the Returned Asylum Seekers (Black Inc 2005), David Corlette, have embarked on a sea kayaking journey in and around Australia's excised zones to highlight the plight of people and show evidence they believe demonstrates that this system has led to some being returned to the countries they sought to escape where their human rights have been violated and where some have been killed. 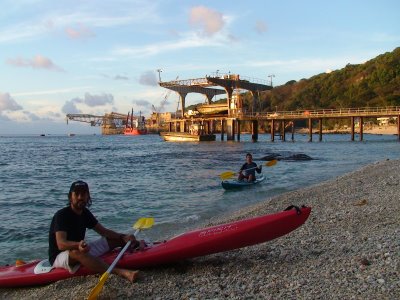 David Corlett told Magnetic Times, "Part of the reason for visiting Magnetic is that it seems bizarre that Magnetic Island, which we, and I think southern Australians consider a cultural icon - a place of our dreams - has been excised for refugee protection purposes."

The pair are also making a film of their paddling adventure which has taken Simon on a 2,226km solo kayaking trip down the Murray River. The couple have already paddled in the waters off Christmas Island and the Cocos Keeling Islands off Western Australia.

In these places and in much of Australia David believes there is little understanding of what excision means. "People generally don't know about excision. They know about tough laws on refugees but when you explain that it can lead to people being returned to real danger, when you talk about the real life situations, it moves away from an impersonal political realm. The consequences are grave. It's not an, 'Oops we made a mistake!' issue. The system needs to be as accurate and effective as it can possibly be. You have to get it right," he said.

Weather permitting David and Simon will depart from Townsville at 10am this Sunday, September 2, and head towards Magnetic where they plan to arrive for lunch and to meet locals at a Picnic on the foreshore at Nelly Bay from about noon onwards. They are hoping to meet locals and talk about the implications of the Island's excision, and seek signatures for a petition asking the Federal Government to revoke their excision laws. They will also be seeking donations and selling items including T-shirts and hoodies to finance their work. 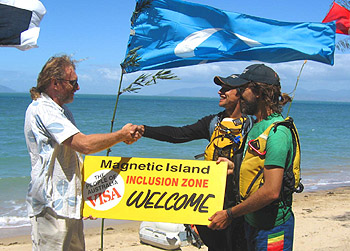 Paddlers for Refugees and Asylum Seekers, Simon Keenan and David Corlett were warmly welcomed to Magnetic Island on Sunday by about thirty locals when they paddled to Magnetic's shores from Townsville to highlight the Island's excision from the Australian Immigration Zone.

The pair, who have been paddling in the waters of "excised" islands around Australia's northern coast arrived about midday for a lunch with welcoming Islanders on the foreshore at Nelly Bay.

David Corlett was, among other issues, interested in how locals live with the costs associated with being on an Island. He noted the increased costs and difficulties associated with building on Magnetic and compared these comparatively minor expenses to the enormous costs he saw being expended by the Federal Government in building an immigration detention centre on remote Christmas Island. 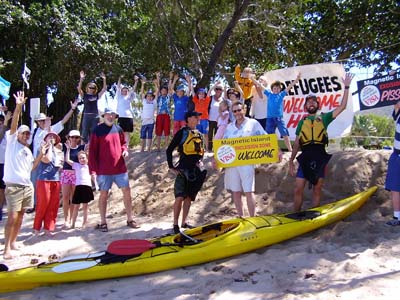 David and Simon's project has been endorsed by Amnesty International Australia, the Asylum Seeker Project of the Hotham Mission, Project SafeCom, A Just Australia and the Centre for Human Rights Education. 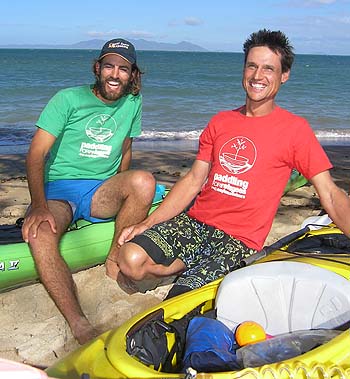 They have been seeking in-kind and financial support for what has been an expensive project but one which will also become the subject of a documentary film. To raise funds the couple have been selling T-shirts which are available through the Project's website for $20 or by emailing the pair direct: paddlingforrefugees@gmail.com