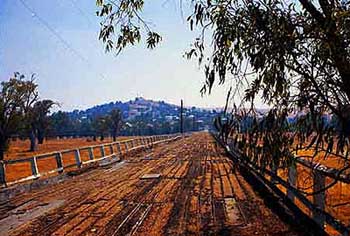 On the road to Gundagai

Well, maybe we won't make it exactly into Gundagai, but we think we'll whizz right past the town on the Hume Highway in NSW in the coming few weeks...

From the Australia Day weekend 2004 on 26 January, we'll take the show on the road.

We'll travel from Adelaide to Melbourne, Sydney to Brisbane and the Sunshine Coast, before descending on Albury-Wodonga for the Second Annual Rural Australians for Refugees Conference.

At Project SafeCom we credit ourselves with having assisted some film makers and current affairs reporters by providing background information that helped to shape several documentaries about Australian refugee issues, and as a result we're able to present several movies and clips in various venues around Australia.

Previously these were shown at our September Symposium and events in Fremantle and Bunbury in Western Australia.

We did make it to Gundagai. Click on the little image to open the full size picture of our coordinator meeting the "Dog that S(h)at On the Tuckerbox, Five Miles from Gundagai" ... and, a heartfelt thanks to the hundreds of refugee advocates, Project SafeCom members, supporters and friends we met along the way, and who worked to support, build and be part of our events, evenings and meetings!

The tour is supported by the following organisations:

Project SafeCom's presentation in Adelaide, by Jack Smit, was both stirring and stimulating. There are so many sides to the refugee debate, and any opportunity to focus on the facts, and not be carried away with just the raw emotion caused by the evidence of injustice, is useful.

Featuring: The issue of 'refugees at sea': looking at Nauru's hero Captain Arne Rinnan, his welcome in New Zealand offset against his treatment by Australia, and his final voyage on The Tampa. This is the footage that 98% of Australians missed, and that's unlikely to come to hand again.

Date: Saturday 31 January 2004
Time: to be announced
Venue: "a" UTS Workshop Room (to be confirmed)
Location: University of Technology Sydney, Broadway
Featuring: Limits and possibilities for the next election, and a selection of Project SafeCom's documentaries

"The Refugee Action Collective Queensland has been very pleased and fortunate to host Jack Smit of Project SafeCom in Brisbane as a part of his 2004 tour."

"Jack is well-known to refugee advocates here, as he his around the country, for his tireless and highly valuable work keeping us up to date with the news as it breaks, and also providing his insightful analysis and clever campaign initiatives. It's true that the refugee rights movement in Australia would not be the same without his amazing work of the past three years."

"Being a bloody big continent, we work in physical isolation in cities and localities far apart, so the opportunity to meet well-known advocates from afar is really valuable in terms of cementing the vital rapports campaigners have nationally. At the event we had here for Jack people came from the all around to meet him and hear his ideas. Since then, we are in regular contact with Jack, comparing notes about the campaign, and so his visit has had far-reaching benefits for us as social justice campaigners in Queensland. We love Jack!"

Media Launch of 'Parliament for Refugees'

Jan - Oct 2004: The 2004 Federal Election: Showing Conscience Parliamentarians - The red section on our website, with almost another 100 pages, is packed with facts and statements by politicians and with our suggested ratings for a Parliament for Refugees, all in the spirit of "WE shall determine who governs this country, and in which way they govern..."

10 January 2004: Albury-Wodonga: The Second Annual RAR Conference - Rural Australians for Refugees getting together at Charles Sturt University in Albury-Wodonga. To help our contacts, we put up the program schedule on the website, and we're leaving it here...

The Supporter and the Activist

"I had the pleasure of attending a workshop session "The Supporter and The Activist", that was chaired by Jack Smit at the National Rural Australians for Refugees Conference in Albury-Wodonga in January 2004. Jack's workshop, as I recall, explored questions of ways in which decent Australians can give voice to our feelings of distress at the profound cruelties being perpetrated on men, women and children asylum-seekers, in our names, by our present government. How do we channel our anger and shame at these policies in positive, socially productive ways? How do we not give way to apathy and cynicism and disengagement?"

Jack didn't "chair" the meeting: he bounced around the room, engaging people with his own enthusiasm and energy, drawing us out, showing that we are all in our own way "activists", no matter on how small a scale. He generated a good positive feeling out of what was potentially pretty depressing material. I was most impressed at his people skills, his capacity to move a large group along in a positive and life-enhancing way. I think it was no accident this his workshop was the best-attended of four simultaneous workshops - he has great skills in what he does, and what he does is in a very good cause. I am glad that the Myer Foundation is supporting his work in the Australian community."

Tony Kevin, author of A Certain Maritime Incident: the Sinking of SIEV X

Supported by The Myer Foundation