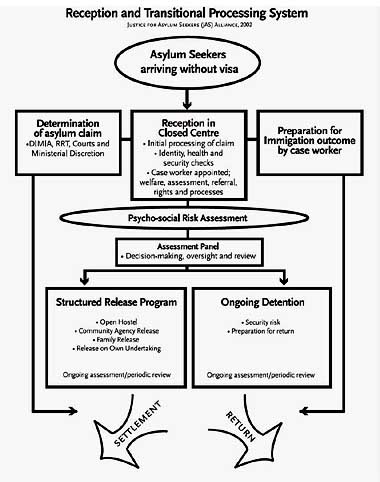 A Reception and Transitional Processing System

"The Reception and Transitional Processing System provides a realistic, detailed and soon to be costed reform of the immigration detention system which resolves many of the serious problems that currently exist. It enables the Australian government to process people with integrity and confidence."

Image: the schematic diagram of the proposed Reception and Transitional Processing System: click the image to open a larger version.

This page details the Executive Summary and the Conclusions of the paper. It's also available for download from the page as a PDF file - see below.

Grant Mitchell is the Co-ordinator of the Asylum Seeker Project at the Hotham Mission in North Melbourne. He discusses and presents a paper outlining an initiative by the Justice for Asylum Seekers Alliance Detention Reform Working Group that looked at Alternative approaches to asylum seeker policy, more specifically the Reception and Processing System. The paper with the same name, Reception and Transitional Processing System, was published in June 2002 by the Alliance.

About Justice for Asylum Seekers

Justice for Asylum Seekers (JAS) is an alliance of over twenty five national churches and community organisations founded in Melbourne in 1999 to address negative perceptions of refugees claiming asylum. JAS is concerned with achieving just treatment of people claiming asylum in Australia while acknowledging the need for border management and sound migration processes.

1 August 2003: Grant Mitchell, The Swedish Model of Detention - The decision by a state to detain individuals without valid visas, adequate identification or immigration clearance raises numerous arguments. The Swedish practice of detention should be seen as a model for other countries, not only in its ability to quell unrest and create a safer working environment, but also in how to treat and respect those detained.

Justice for Asylum Seekers (JAS) is an alliance of over twenty five national churches and community organisations founded in Melbourne in 1999 to address negative perceptions of refugees claiming asylum. JAS is concerned with achieving just treatment of people claiming asylum in Australia while acknowledging the need for border management and sound migration processes.

Some of the main problems in the current immigration detention system that the Reception and Transitional Processing (RTP) system addresses are:

The RTP System ensures a more humane and functioning return system, which includes:

The RTP System will contribute to a number of positive outcomes:

Australia's Existing Alternative to Detention: Each year thousands of people claim asylum and are permitted to live in the community by the Australian Government. They arrive with a valid visa and then claim asylum and the Government does not detain them. They go through exactly the same claim process as those who arrive without a visa and are held in detention.

Cost of Detention: An indicative break-down of 1999-2000 costs to the public of detaining people shows that it costs much more than the Government's existing programs for processing and monitoring asylum seekers in the community. In 2000 - 2001, the cost for detention was approximately $104 million, increasing to $120 per day in 2002. It cost approximately $150 million in 2001-2 to detain 3500 people in mainland detention centres.

Cost of DIMIA's Programs for Asylum Seekers in the Community: Many asylum claimants living in the community are eligible, for a period of time, for the Government funded Asylum Seeker Assistance Scheme (ASAS) which is managed by the Australian Red Cross. In 2000-2001, there were 2,691 people claiming asylum who received ASAS payments. ASAS averages 89 per cent of the Centrelink special benefit.

Absconding: DIMIA evidence shows that the fear of absconding is exaggerated. No unauthorised asylum seeker released on a bridging visa in Australia from 1996-1998 failed to meet their reporting obligations to DIMIA. The RTP system has a risk assessment system which minimises absconding.

The RTP System improves DIMIA's existing compliance system through the use of risk assessment systems, rational consideration of rates of absconding in Australia and overseas; enhancing the role of DIMIA's Compliance unit, employing case management by welfare agency and an independent case assessment panel. The involvement of caseworkers and other community agencies in this system ensures visibility and accessibility and contributes to the asylum seekers meeting their compliance requirements with DIMIA. This is in addition to any explicit reporting requirements DIMIA might make.

The Reception and Transitional Processing System aims to oversee the transition from a detention to a reception regime, based on a comprehensive risk assessment, case worker support, assessment panel oversight and implemented according to specific process stages.

JAS is convinced of both the need and the ability for Australia to move towards a balanced detention/reception system. We believe the RTP System includes a number of elements that enable both a humane and flexible response to asylum seekers, while providing reassurance for decision-makers and the wider community.

Furthermore we believe the risk to abscond for most asylum seekers is exaggerated. Evidence from Sweden, USA, Hotham Mission and Australia's various parole models, show this is to be the case. With ongoing case management, individual risk assessment and a structured release program, we believe most asylum seekers can be released into the community with supervision and compliance requirements. Issues of national security and border protection are concerns for all Australians. However, placed in the context of initial closed detention and adequate health and security checks, these issues should not be a hindrance to the release of those not found to be a security risk. This is particularly highlighted with cases such as unaccompanied minors and single mothers and children.

Changes to the current system of detention are long overdue. A number of recent examples exist which highlight the gap that exists between security and DIMIA and the need for a caseworker system. This includes the recent case of a Vietnamese man in Villawood wrongly deported and the Woomera hunger strike of January 2002 which highlighted the lack of trust between DIMIA, ACM and the detainees. In effect the Minister's Immigration Detention Advisory Group provided a de facto case management role, providing information and consultation with people about their options. However it is neither desirable nor sustainable for IDAG to fulfil this function on anything more than a limited and ad hoc basis. The establishment of a national case management service coupled with an independant review mechanism for asylum seekers in and out of detention, would dramatically improve the current system and contribute to a number of positive outcomes:

The transition from a detention-based regime to a reception-based regime will be a process that requires critical evaluation, realistic alternatives and analysis of service provisions, costing, administrative and procedural responsibilities and an ability for community and Commonwealth to work together. The Reception and Transitional Processing (RTP) System provides a realistic, detailed and soon to be costed reform of the immigration detention system which resolves many of the serious problems that currently exist. It enables the Australian government to process people with integrity and confidence, moving vulnerable people, particularly children, families and the traumatised, into the community where they can be supported and easily monitored.