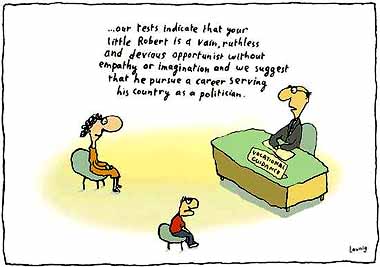 Image: thanks to Michael Leunig cartoons at The Age

Another D-Day is about to arrive for Human Rights in Australia - next week Tuesday, as scheduled on the Parliamentary program for about 12:30: the tabling of the Migration Litigation Reform Bill 2005 in the Senate. Some details of the Bill are below, as taken from the Parliament website.

I think the Bill is a disgrace, but it is also an opportunity to show to the better informed how the fight to the death between politicians in the Howard administration against the "refugee lobby" is a callous one, and that for the politicians, backed up by the best of their legal advisors and legislation drafters, this fight is one they're fully prepared to fight - and it seems there's no limit to the budget. No doubt they the politicians are set for another win in the context of a Senate majority, but it will not necessarily be a win for public opinion of those politicians. The balance of those accounts has changed considerably since Cornelia Rau and Vivian Alvarez. This week Vivian Alvarez' lawyer George Newhouse wrote in the Sydney Morning Herald:

In the coming days, the Senate will consider extending the courts' power to summarily dispose of immigration proceedings and to impose personal liability for legal costs on lawyers. The changes will deliver less impartial supervision of the department and administrative decisions. They will also require lawyers to certify at the start of proceedings that an application has merit and there will be strict time limits for judicial review. With legal aid and pro-bono lawyers exposed to tens or hundreds of thousands of dollars in penalties, many will be forced to leave applicants unrepresented.

The proposed legislative changes are surprising, given that the Palmer inquiry found the department has a "culture that is overly self-protective, a culture that is largely unwilling to challenge organisational norms or engage in genuine self-criticism or analysis". With its poor track record, now is not the time to strengthen the position of departmental officers when making decisions about incarcerating or removing individuals.

The act already limits the right to provide immigration advice to migration agents and restricts rights of appeal and judicial review. The cost and administrative burden of the migration agents licensing regime acts as a choke on legal centres and pro-bono lawyers and stops them from taking on migration cases.

Vivian Alvarez Solon's inability to get help from a local legal aid centre because of immigration licensing restrictions is one of the most serious, but unknown, failings of the Migration Act and contributed to her wrongful deportation.

Likewise, when lawyers visited Baxter on New Year's Eve in 2004 they were not able to see Cornelia Rau because of limits on their rights of access to detainees since the act requires mentally ill detainees to apply formally to see a lawyer.

In his report Mick Palmer recommended improved access to medical care. However, he could not address the act's impediments to obtaining legal advice or judicial review, and this has allowed the Government carte blanche to proceed with this further ratcheting down of legal rights.

The Migration Act is bloated and legalistic, and even a well-educated lay person would find it difficult to wade through its Byzantine regulations. People with limited English or a disability are incapable of understanding their basic rights under it, let alone its arcane provisions and regulations. After the string of recent errors there should be greater review and increased access to legal advice, not less.

Metcalfe has started a structural review of his department. But if the Government is serious about immigration reform, it needs to revisit the Migration Litigation Reform Bill 2005 to ensure it complements the department's new direction, and to change it so that it effectively deals with the real issues that plague our immigration system.

After the criticisms in the Palmer report, the Government's immigration processes are at a watershed. Why is it persisting with this legislation when it goes against recommendations for increased scrutiny and openness?

Advocates, who assist or encourage refugees and asylum seekers to seek judicial review of migration decisions, may be liable for the costs incurred under proposed changes to legislation.

The impact of the proposed legislation is already being felt, with community lawyers and legal advisers announcing they will be unable to take on pro bono work for asylum seekers once this Bill has been passed.

The Migration Litigation Reform Bill 2005 is one of a series of Bills which is aimed at restricting - some would say preventing - judicial review of migration decisions. Like all migration Bills, it is complex. But the fact that it should pass the government-controlled Senate easily means very little attention has been paid to its possible ramifications.

There is no doubt that the outcome of this legislation will be far reaching and potentially retrograde, especially for those already disadvantaged under the current system. It directly affects litigants, their advisers, legal representatives and migration agents

I tried to prime the media on 7 October for the issue with a furious press release. For the material I could draw on some revealing assessment figures from an article I wrote shortly after the Georgiou group had presented its case for detention policy changes to the Coalition caucus. I wrote in the release:

"While there is now overwhelming evidence since the Tampa affair that the DIMIA primary refugee assessors are stacked to such a level by political bias, that it can be said to be entirely corrupt, the Minister for Immigration, just fresh from the Vivian Alvarez debacles, has the audacity to push for this legislation."

"In 2002 Jesuit Priest Frank Brennan concluded that the DIMIA primary assessment had an average error rate of 75%, as shown by the number of cases overturned on appeals by the RRT."

"Last year, the DIMIA Primary Assessor erred 100% of the time in relation to the Hao Kiet Vietnamese, causing them untold grief as a result, by having them locked away in the Christmas Island refugee jail. It took the Vietnamese community tens of thousands of dollars and the refugees a 2-year imprisoned wait until under the threat of Federal Court action the DIMIA started to see some sense - and it took Ministerial intervention with many of the Vietnamese so the heat could be pointed away from also some shonky reviews by members of the RRT."

"And paralegals in Western Australia have confirmed to Project SafeCom that the re-proving of refugee claims for TPV holders caused an error rate for the DIMIA assessors of 95% of the time amongst the about 800 applications in the last year. This shocking error rate correlates to similar rates in other states for TPV holders, as confirmed by Ms Pamela Curr of the Melbourne Asylum Seeker Resource Centre."

"This is the context where several Liberal MP's have been trying to 'sell the line' that endless periods spent in detention is a result of the many court appeals that are possible for refugees. These MP's are peddling this entirely false notion to push for the legislation, but they fail to be open and accountable for the fact that it was the shocking errors made by the DIMIA that caused this detention in the first place."

Project SafeCom spokesman Jack H Smit said, that "this legislation was pushed immediately following the party room meeting that considered the demands by Petro Georgio's group - and in the weeks following the 31 May party meeting, MP's such as the treasurer Peter Costello, Mal Washer (Moore), Malcolm Turnbull (Wentworth) declared that this legislation would "fix the problem" while Attorney-General Philip Ruddock at the time expressed he would introduce this legislation using the Senate marority after July 1 this year."

"This week we can again witness the serious problems with the DIMIA culture, but the fact that these MPs peddle the false notion that taking away justice of court reviews will fix the problem of detention, shows that the same culture pervades the Howard administration. It is politicians who should be brought to account. Since Tampa they are the authors of the poisoned climate for unannounced refugees coming to our country."

The Bill was announced by the Immigration Minister Amanda Vanstone in a press release on 10 March - of course as one that would reduce the workload of the courts and a reduction to the huge blow-out of the costs of the Immigration Department's litigation budget, referring to the unmeritorious claims put by lawyers and shonky migration agents. Nobody in government however, informs the public about the consultations of this same Department with translation services, such as those used for (against?) the Bakhtiary family.

The Senate Legal and Constititutional Committee soon afterwards launched their Inquiry, and on the parliamentary website are the 25 submissions received from legal as well as advocacy centres. The documents are worth exploring, and the Senate Report was issued on May 11, 2005.

Text of the Bill

Here's the full text of the Bill from the Parliament website:

WARNING: This Digest was prepared for debate. It reflects the legislation as introduced and does not canvass subsequent amendments. This Digest does not have any official legal status. Other sources should be consulted to determine the subsequent official status of the Bill.

Schedule 1 commences on a day to be fixed by Proclamation or, if this does not occur within six months of Royal Assent, on the first day after that period.  Schedule 2 commences on Royal Assent

To amend the Migration Act 1958, the Federal Court of Australia Act 1976, the Federal Magistrates Act 1999 and the Judiciary Act 1903 to assist courts in managing their migration litigation workload.

Given the short time between introduction of this Bill and scheduled debate in the House of Representatives, this digest is a draft covering key points only. It will be revised to include a more comprehensive discussion in time for further consideration of the Bill by the Parliament.

The 2004 Bill was also the subject of an inquiry(2) by the Senate Legal and Constitutional Legislation Committee.  The 2004 Bill lapsed when Parliament was prorogued for the October 2004 federal election.

The main proposals in the Bill are to:

The Explanatory Memorandum notes that:

In October 2003 the Government commissioned the Migration Litigation Review conducted by Hilary Penfold QC to inquire into more efficient management of migration cases.  According to the Second Reading Speech, the measures in the 2005 Bill have been drawn from recommendations by the Review. Bills Digest no 118 noted in relation to the 2004 Bill that:

The findings of the Review have yet to be released. In other words, the Government has still not revealed publicly the detailed analysis from the Review on which the proposals in the 2005 Bill are based.

The FMC, which commenced hearings in 2000, received jurisdiction in migration matters in 2001. As the Second Reading Speech notes, 8 additional magistrates have been appointed to the FMC. The graph below indicates that the FMC is playing the role intended for it, taking on a substantial part of the burden in migration matters from the Federal Court and the High Court.

The Constitution and time limits

Remitting migration matters to the FMC from the High Court

Pursuant to section 44 of the Judiciary Act 1903, the High Court could remit any matter, on its own motion or on application of the parties, in full or in part, and whether or not the matter originated in the High Court.  Importantly however, the Migration Legislation Amendment (Judicial Review) Act 2001, which commenced in September 2001, removed the power of the High Court to remit matters that relate to immigration decisions where those decisions a) have a merits review process attached,(6) and b) are subject to the Minister's discretion to substitute a more favourable decision.(7) It follows that these constitutionally entrenched matters must now be reviewed by the High Court itself.