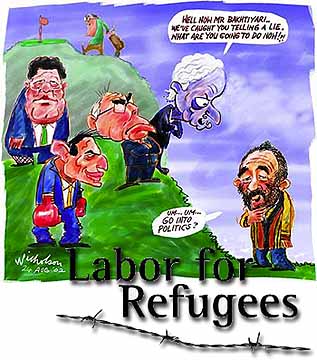 The struggle for Labor, the trouble with Labor

The struggle for Labor from and as a result of the 2001 Federal Election in Australia gave rise to the formation of the lobby and action group "Labor for Refugees" around Australia.

The draft proposal below, written by one of the Labor for Refugees branch members, gives a striking snapshot about what was largely absent from the newsmedia reports at the time - and it's still absent from the public debate: the fierceness of the struggle within Labor.

The Labor for Refugees proposal in full is reprinted below. It's followed by some news reports stating the issues at hand. Click the links to jump to the sections on this page:

A Draft Proposal from a Labor for Refugees Branch

I ask you to refer to Part A Paragraph 7 of the ALP National Constitution. This clause reads, in part:

"... policy is not made by directives from the leadership, but by resolutions originating from branches, affiliated unions and individual Party members."

Notwithstanding, in launching its asylum seeker policy last December, the Federal Parliamentary Labor Party was at variance with this clause in number of aspects.

I shall now ask you to refer to Part E Paragraph 7 of the National Constitution. This clause reads (in part):

"... decisions of National Conference are equally binding on all members of the Party whether determined as Platform or as a decision of Conference."

In the context of this clause, I shall now ask you to refer to Chapter 12 Para 92 of the Party Platform adopted at the National Conference in 2000. This Para reads (in part): "Labor will ensure that Australia's international obligations towards asylum seekers are met, and Labor will positively promote the rights of refugees and asylum seekers."

In a range of areas, the Federal Parliamentary Labor Party policy is at variance with this aspect of Party Platform. Space does not permit me to present a complete inventory of those areas. However, I shall provide several examples to illustrate the point.

Do you think the piece is likely to "positively promote the rights of refugees and asylum seekers" as the Party platform requires?

Or, alternatively, do you think the piece is likely to "serve to exacerbate racist or xenophobic perceptions, behaviour or attitudes" as our international obligations require us not to do.

What do you think?

Properly constituted State and Territory Branch Conferences, and also other bodies such as "Labor Coalition of Friends of Asylum Seekers" and "Labor for Refugees NSW", have prepared a set of policy recommendations that are more in keeping with our international obligations (than the one launched by the Federal Parliamentary Labor Party last December).

These need to be debated openly on the National Conference floor next January.

There are numerous reasons why they need to be debated openly, not the least of which is the opportunity to for the Party to provide a public expression of apology for its shameful conduct of the past few years.

Furthermore, open debate will also weaken the factions' ability to make backroom deals, such as:

'... My submission is in reference to your Terms of Reference 2: "Mechanisms to secure the best input to the party's policy review and development processes." My proposal is that the Parliamentary Party shall be required to present the Party Platform ... in future election campaigns ... This has not been the case of late ...'

Some of my colleagues have suggested that this proposal is too confrontational. I am sorry that they think that.

If only Labor had been more confrontational and less compliant during the 2001 Federal Election Campaign ...

If only Labor had been more confrontational and less compliant since then (for example, when, on June 28, 2002, Labor endorsed a Government Bill that prevents asylum seekers from appealing on "natural justice" grounds) ...

Now, it is almost too late.

Thank you.
A Labor for Refugees member

Cornered Crean caves in to save job

Simon Crean last night caved in to pressure to give his party critics direct influence over Labor's refugee policy, as his push for major party reforms remained in disarray.

The Labor leader agreed to a compromise in the face of a challenge to his authority on at least four fronts on the eve of taking his reform package to a vote at a special national conference in Canberra, starting today.

He acted after it became clear that it was his only chance to reduce possibly irreparable damage to his leadership. To do so, he had to accept a deal to stop the electorally sensitive refugee issue being publicly debated at the conference.

It followed intense negotiations yesterday between Mr Crean and the secretary of the NSW Labor Council, John Robertson, centering on a proposal that the ALP's current hardline stand on refugees and mandatory detention would not be raised if direct input into revising the policy was given to Mr Robertson's Labor for Refugees group.

Under the compromise deal, brokered late yesterday by the NSW left-wing frontbencher Anthony Albanese, Mr Crean has agreed to include Labor for Refugees on a new policy committee and delay a final decision on asylum-seeker policy until after a vote at the next national conference, possibly next year.

Another distracting Labor brawl worsened yesterday as the senior federal MP Laurie Brereton remained determined to take a battle over the political career of his sister, Deirdre Grusovin, to the NSW Supreme Court.

Mr Brereton gained an undertaking from Labor's NSW head office that it would not count a preselection ballot in Ms Grusovin's state seat of Heffron, in south-east Sydney, until after a court hearing on Wednesday.

He is pressing ahead with court action after an extraordinary meeting of the ALP's national executive on Thursday night declined to hear an appeal over Ms Grusovin's case, handing the party's NSW secretary, Eric Roozendaal, a major victory.

Mr Brereton, who represents Mr Crean in the NSW party, is at war with Mr Roozendaal over its attempts to dump his sister and install a younger female candidate, Kristina Keneally.

On Wednesday Mr Brereton's lawyers will argue in court that the NSW head office wrongly intervened in Heffron on the pretext of rules to boost affirmative action when the objective had already been realised.

They will also argue that head office failed to meet a mandatory requirement to consult all 400 members of Ms Grusovin's branches and the state ALP leadership before intervening.

In Canberra last night, opponents of Mr Crean's drive to reduce union representation decided to tackle their leader head-on about the issue on the conference floor this afternoon.

Defeat for Mr Crean in a vote by 200 conference delegates would almost certainly cost his leadership and effectively end any political influence wielded by his chief ally, the ALP federal president and chief of the National Union of Workers, Greg Sword.

In an ambiguous public comment yesterday Mr Sword said: "The party will be a different party on Monday morning."

Mr Crean also faces a struggle at the conference amid much disagreement over proposals to double its size.

There is widespread dissent over the campaign of Labor women to have a quota for female MPs increased from 35 per cent to 45 per cent of seats.

In a last-minute attempt to push the case against Mr Crean, the Transport Workers Union yesterday released survey results from focus groups of members in Sydney's west and Newcastle which carried damning criticism of Labor's leader.

According to the TWU research, union members did not believe Mr Crean was listening to them and they believed that he had no chance of being Labor's "saviour".

Before the conference, Mr Crean said Labor would fail to win the next election unless it agreed to reform itself.

"I'm confident that the party wants to win the next election," he said. "It won't win the next election unless it modernises itself and that begins with revamping our structure, changing our rules, making ourselves more appealing to people to join, inviting more people in on the basis that they know they have a real say."

The Australian
By John Kerin and Misha Schubert
January 05, 2004

Asylum-seekers would be released into the community and have access to jobs and Medicare under a plan that threatens to split the Labor Party ahead of its crucial pre-election national conference.

In amendments to Labor's immigration policy being sought by the party's Left-aligned Labor for Refugees, a future Labor government would boost Australia's refugee intake, abolish mandatory detention and restore all islands excised by the Howard Government from Australia's migration zone.

The push will be a flashpoint for Mark Latham's fledgling leadership. He is understood to support the less radical position laid down in the party's draft platform.

The divisive debate comes as scores of asylum-seekers detained on Nauru stage a hunger strike in the hope that their bids for refuge will be reviewed by the Howard Government. But in a move described as "hopeful" by Immigration Minister Amanda Vanstone, six of the men dropped out of the protest over the weekend. Eight of the 35 remaining hunger-strikers remained in hospital for forced rehydration, departmental officials said.

The changes sought to the Labor Party's refugee policy, which will be debated on the floor of the national conference on January 30, also include setting up a community-based system where asylum-seekers would be housed in open accommodation with a guarantor and have to report periodically.

They would have the right to appeal their cases through the court system.

Left-wing Sydney MP Tanya Plibersek said: "Whenever you have an issue that people see as a moral litmus test, feelings will run high."

"I don't think it does us any harm at all to have that debate - it's a debate the whole community should be having."

But Labor immigration spokesman Stephen Smith rejected suggestions that the debate would be acrimonious or split the party. "No one will be surprised that there are strong views on asylum-seekers within the ALP," he said.

"There will be a lively debate on the floor of the conference and those views will be aired strongly.

"But I am not expecting it to tear us asunder."

Sources on Labor's Right said yesterday that despite the strong language of the Labor for Refugees amendments, views within the party were not so disparate.

They pointed to a considerable softening in Labor's stance on asylum-seekers since the last election, including backing the release of children and retaining mandatory detention only for an initial period while health, quarantine and identity checks were carried out. The party platform also favoured returning all islands, apart from Christmas Island, to Australia's migration zone.

Ms Plibersek backed the call for Australia to take more refugees and scrap temporary protection visas. But she downplayed the prospect of a policy shift on mandatory detention. "What I will be battling for is a change to the Howard Government's practice of indeterminate detention."