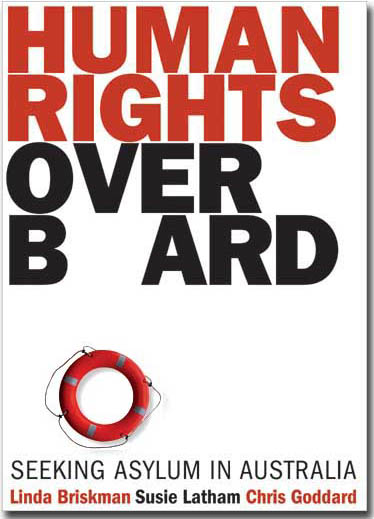 The testimonies of The People's Inquiry into Detention

31 October 2008: Human Rights Overboard: the Perth launch with Carmen Lawrence and Fred Chaney - with many photos. "The Australian Council of Heads of Schools of Social Work called the People's Inquiry to conduct an independent, open and transparent investigation in order to give voice to those previously silenced, to influence policy and to place the stories of detention on the public record."

10 September 2008: Human Rights Overboard: Media reviews and opinion reactions - "Using the first-hand accounts of former child detainees and their parents, Human Rights Overboard details the impact of mandatory detention on boatpeople and other unlawful entrants before the policy was watered down." Here is the news about this foundation document of Australian refugee detention and human rights issues.

This is a profoundly important book. It is an unflinching look at disgraceful events. Too many Australians allowed these things to happen. Our generation will forever be marked with the shame of it. It is not only an epitaph for the Howard government: it is also a caution to future generations.

About the publication Linda Briskman, Susie Latham, and Chris Goddard, Human Rights Overboard (2008): This book is now out of stock, and we no longer supply it to our members or to the wider public. We suggest you could search for online new or second-hand bookshops to secure your copy.

In 2005, in the wake of the Cornelia Rau scandal, a citizen's inquiry was established to bear witness to events in Australian immigration-detention facilities. Until then, the federal government had refused to conduct a broad-ranging investigation into immigration detention in Australia, and the operations within detention centres had been largely shrouded in official secrecy.

The People's Inquiry into Detention (as it came to be called) heard heartbreaking evidence about asylum-seekers' journeys to Australia, their detention process, life in detention, and life after detention. In total, around 200 people testified to the inquiry, and a similar number of written submissions were received.

Clearly and comprehensively presented, the book is a haunting journey guided by voices from every side of the fence: former immigration detainees, refugee advocates, lawyers, doctors, psychiatrists, and former detention and immigration staff. Together, their stories bear testimony to a humanitarian disaster that Australia caused, and that must be remembered so that it never happens again.

With a foreword by prominent humanitarian lawyer Julian Burnside, Human Rights Overboard is an essential book that will resonate with the Australian public and, indeed, the world, for years to come.

Professor Linda Briskman is the Dr Haruhisa Handa chair of human rights education at Curtin University. She has received the award to deliver the Eileen Younghusband lecture in South Africa in July 2008, for her work on the People's Inquiry into Detention. She is the author of two other books, Social Work with Indigenous Communities and The Black Grapevine.

Susie Latham has a Bachelor of Arts, a Bachelor of Social Work and is a registered migration agent. She has worked as a volunteer for Melbourne's Refugee and Immigration Legal Centre for over five years, and has been a volunteer English tutor to refugees. She has worked for two Divisions of General Practice organising training for and engaging general practitioners in a number of health and mental health projects, and has spent over eight years in various workplaces as a union representative.

Professor Chris Goddard is the director of the National Research Centre for the Prevention of Child Abuse, Monash University. Recognition of Chris Goddard's accomplishments include a 2005 nomination for the UN Human Rights Award for journalism. He is the author of two other books, The truth is longer than a lie and In the firing line.

Human Rights Overboard is the result of a three year citizen's inquiry into immigration detention. The People's Inquiry into Detention brought together a wide range of individuals and groups, with shared concerns about the laws, policies and practices of immigration detention. Convened by the Australian Council of Heads of Schools of Social Work, the initiative followed the establishment by the federal government of the Palmer inquiry and the refusal by the Howard government to broaden the terms of that inquiry, despite calls by refugee advocates and immigration detainees.

The Inquiry process was organic, transparent and inclusive. The Inquiry is remarkable, not just because so many people felt able to come forward and place on the public record the stories they had carried with them, but also because so many people from all over Australia and all walks of life volunteered to help. With very little funding ten public hearings were held across Australia. Close to 200 people provided verbal testimonies at the hearings (one-third had been in immigration detention) and a similar number of written submissions were received.

Human Rights Overboard is themed in four key ways: The journey into detention, processing of refugee claims, detention and life after detention. The evidence presented to the People's Inquiry, which is documented in the book through the stories of those with experience of detention, stands as a clear condemnation of government policies which damaged and, in some cases, destroyed the men, women and children who fled brutal regimes and asked for help. It condemns those politicians who, in the face of overwhelming evidence of the destruction such policies were causing, not only failed to change them, but continued to defend them.

The People's Inquiry into Detention heard heart-breaking evidence about the deaths of over 360 asylum seekers, including 148 children, during boat journeys to Australia in 2000 and 2001. One man told the Inquiry his mother drowned after their boat sank during interception by the Royal Australian Navy:

The boats came and took as many people as they could and I was asking them what happened to my family. They kept assuring me they were on the other boat. Then I realised that there was a young woman who had died. My wife and I didn't know anything about our other children and she was crying continuously and asking the officers to find some information about them.

They managed to bring the husband of the woman who had died. He told us that your mother has unfortunately passed away, but your children are in the other boat. I was devastated. I screamed, I cried, I was very, very sad but I couldn't do anything. As soon as we get into the big boat my wife was running towards our children. She started hugging them and crying with them. I asked the authority to show me my mother's body and they just show the body from a distance.

The Inquiry also heard that for asylum seekers who survived the dangerous journey, the relief and joy of sighting Australian land was short-lived. Those who were allowed to make claims for refugee status were placed in detention centres, mostly situated hundreds of kilometres from Australian capital cities or on far flung Pacific Islands. In making claims for refugee status, they faced obstruction and suspicion from the Immigration Department and struggled to deal with an assessment process the People's Inquiry heard is seriously flawed, subject to political influence and often takes years to recognise claims. Migration Agent Marion Le told the Inquiry about helping unaccompanied children on Nauru:

We were there very late one night and seven young people came in. I looked and I thought, My God, how old are you? One said, I think I'm 14. This is 2004, they had been there over three years, and he thought he was 14. On at least one of the files was written a note from a DIMIA woman officer. "I have been asked to change this child's age to make him over 18 and because I am asked I am doing it, but I do not agree." I am guilty of not making a statement about that publicly because I wanted to ensure all of the people on Nauru got off. If I had gone out and talked about the abuses of process we were seeing they wouldn't have come here. I would have been stopped going to Nauru.

Essentially privatised prisons, the People's Inquiry also heard from numerous sources of shocking conditions inside detention centres. It was told of people being forced to steal food to feed their children, of assaults on both adults and children, of physical and mental health care so inadequate that many former detainees now have serious, permanent disabilities. The Inquiry also learned that between 1998 and 2008, 19 people died in these miserable surroundings and that the agencies meant to hold government to account on such matters were essentially powerless to affect change. This lack of accountability created a culture of violence and self-harm within detention. Protests were routinely met with armed force. The Inquiry was told of people eating glass and gravel and pouring boiling water on themselves, and presented with images of self-harm too graphic to publish. A boy who spent three years in detention said:

The Inquiry also heard alarming stories of people being chemically and physically restrained in deportation attempts before being recognised as refugees, and of nine people who died in other countries after their refugee applications in Australia were rejected.

Once released from detention, many refugees told the Inquiry their experiences had irrevocably changed them. Many were unable to forget the violent images they had been exposed to in detention and suffered ongoing mental health problems. Others told how the uncertainty of their temporary visa status compounded their anxiety. Still others told of relationship breakdowns with wives and children overseas. A refugee supporter told the People's Inquiry:

My friend was almost five years in detention, extremely depressed. Now his wife has divorced him and he will probably never see his little six year old daughter again. A Sister who met him on his release said he was extremely distressed. He just went into his church and cried and cried.

Despite the devastation Howard Government policy inflicted on asylum seekers, the Inquiry also heard moving stories of ordinary people who rejected its harsh approach and connected with asylum seekers as human beings through each stage of their journey. The HMAS Adelaide's Laura Whittle jumped without a life jacket from a height equivalent to a four storey building when she saw asylum seekers in difficulty in the water below. Hundreds of lawyers and migration agents offered their services free of charge to assist asylum seekers through the refugee determination process. Ordinary people visited and protested outside detention centres forming strong friendships with and advocating for those inside. Others started organisations which have raised millions of dollars to assist people released from detention with few government entitlements.