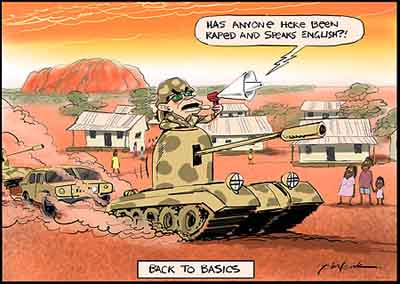 "Our Aboriginal communities are being squeezed further into dysfunction and disenfranchisement by carefully targeted political engineering, the systemic and ruthless roll-out of a planned agenda."

"It is no accident that Howard's scheme to address what he calls the urgency of The Little Children are Sacred report's 97 recommendations was trotted out so very quickly, and addresses so very few of those recommendations."

Jennifer Martiniello is a writer and academic of Arrernte, Chinese and Anglo descent. She is a former Deputy Chair of the Aboriginal and Torres Strait islander Arts Board of the Australia Council for the Arts, and a current member of the Advisory Board of the Australian Centre for Indigenous History at the ANU.

Howard's new Tampa children overboard are our Aboriginal children. The Little Children are Sacred report does not advocate physically and psychologically invasive examinations of Aboriginal children, which could only be carried out anally and vaginally. It does not recommend scrapping the permit system to enter Aboriginal lands, nor does it recommend taking over Aboriginal 'towns' by enforced leases. These latter two points in the Howard scheme hide the true reason for the Federal Government's use of the latest report for blatant political opportunism.

It has been an openly stated agenda that Howard wants to move Aboriginal people off their lands, and has made recent attempts to buy off Aboriginal people by offering them millions for agreeing to lease their lands to the Federal Government, e.g. Tiwi Islands and Tangentyere in Alice Springs. There was also the statement by the Federal Government that it could not continue (?!) to provide essential services to remote communities, which raised an uproar of responses in the press. The focus on the sexual abuse of children is guaranteed to evoke the most emotive responses, and therefore command attention, just like the manipulation of the Tampa situation. But while the attention of the media and the public is being emotionally coerced, what is being sneaked in under the covers?

Two issues specifically - mining companies have applied for more exploration permits in the Northern Territory, the Jabiluka uranium mining operations at Kakadu have already hit the media because of the mining company's applications to the Government to significantly expand its operations, including establishing new mines at Coronation Hill, and another critical issue - nuclear waste. The Howard Government has already mooted that nuclear waste should be dumped in the Northern Territory, on Aboriginal lands. Aboriginal traditional owners are absolutely opposed to this. We have a long history of deaths and illness from radiation, from the atomic tests at Woomera in the 1950s to the current high incidences of carcinomas in the community at Kakadu near the Jabiluka site. The main obstacle to the Federal Government's desired expansion of mining operations in the Northern Territory and nuclear waste dumping is, of course, the Aboriginal people who have occupancy of, and rights under the common law to, their traditional lands.

Following the stages of the Howard Government's usual modus operandi (defund, blame, eliminate), defunding of critical programs for remote Aboriginal community projects began in July 2004, with coerced changes to funding contracts, and monies for critically needed youth and health programs in remote areas being the first dollars to go. Take Mutitjulu for example, which was notoriously profiled by the ABC's Nightline program. I say notorious because one of Senator Mal Brough's personal staffers was the so-called ex-youth worker interviewed on that program, and the content of that interview was laden with myths and mistruths. The staffer in question failed to appear when summoned before a Senate inquiry to explain and the Senator's office is yet to issue a statement. When the community lodged a formal protest to Government, it was raided and their computers seized. But the program did show the effects of the Howard Government defunding of essential programs on that community, in particular the youth centre and health centre. The people at Mutitjulu also just happen to be the traditional owners of Uluru, one of this country's most lucrative tourist attractions. The Howard Government would not like us to ask who benefits by the people of Mutitjulu being forced off their community. Under the amendments to Native Title made by the Howard Government, once Aboriginal people have left their traditional lands, forcibly or otherwise, their rights under the common law that every other Australian enjoys over their land are significantly impaired.

Progressive defunding of Aboriginal art centres has also begun, with a range of community art centres not having their funding renewed by DCITA in July 2005 and 2006 in the Northern Territory, from communities in Arnhemland to mid and southern Territory communities. The art production facilitated by those Aboriginal art centres are the only means through which members of those communities can actually earn a living, as opposed to being on welfare. But then, dependent people are easier to control by means of that dependency. The Howard Government's failed Shared Responsibility Agreements (SRAs) have also been the catalyst for further blame shifting and progressive defunding, take Wadeye for example.

Our Aboriginal communities are being squeezed further into dysfunction and disenfranchisement by carefully targeted political engineering, the systemic and ruthless roll-out of a planned agenda. It is no accident that Howard's scheme to address what he calls the urgency of the Little Children are Sacred's 97 recommendations was trotted out so very quickly, and addresses so very few of those recommendations. It is sheer political opportunism to advance an already in motion agenda, and to score points in an election year. After all, The Little Children are Sacred is not the first of such reports, nor are its findings and recommendations new. The Federal Government has had the 1989, 1991, 1993, 1997 and 2002 reports gathering dust and deliberate inaction on its shelves. Perhaps Mr Howard has been saving them up for a rainy election year? And of course Mr Howard's scheme targets only Aboriginal communities, despite the fact that the findings specifically state that non- Aboriginal men, that is, white men, are a significant proportion of the offenders, who are black-marketeering in petrol and alcohol to gain access to Aboriginal children. What measures is the Howard Government going to take about non-Aboriginal sex offenders, pornographers, substance traffickers and the like? Nothing according to the measures announced, but then, they're not Aboriginal and they don't live on the Aboriginal communities where their victims live.

So who are the real victims here, the silenced victims of John Howard's scheme? Aboriginal children, of course, who will be subject to physically and psychologically invasive medical examinations, irrespective of their home and family circumstances, and who will deal with the mental and emotional fall-out from that? Aboriginal men, too, who become the silenced scapegoats, painted by default by John Howard as all being drunken, child-raping monsters. Perhaps the fact that almost every picture shown of Aboriginal men in the media these days shows them drunk, with a slab, cask or bottle under their arms leads Mr Howard to expect that one to pass unchallenged, irrespective of the fact that statistics show that only 15% of Aboriginal people drink alcohol, socially or otherwise, compared to around 87% of non-Aboriginal Australians. The greater majority of Aboriginal men are good, decent people. Perhaps the media would like to rethink its portrayals of Aboriginal men? How about some photos of the other alcoholics, you know, the white ones. There's more of them.

And what of our communities? The Howard Government also hasn't mentioned that the majority of Aboriginal communities in the Northern Territory are already dry communities, decided and enforced by those communities. But then that would spoil the picture Mr Howard wants to paint of our Aboriginal communities. Other large communities, such as Daly River, have controlled the situation by only having alcohol available from the community's club and enforce a strict four can limit. Also forgotten in the current politically opportunistic furore is the fact that Aboriginal communities around Tennant Creek and Katherine have been lobbying Governments and town councils for decades to restrict the sale of alcohol on Thursdays, when Aboriginal community people come to town for supplies. So far their pleas have been rejected. Nothing in Mr Howard's plan to facilitate that, either. Or about the control of alcohol when those people, once forced off the communities into the towns, bring their problems with them, child abuse or alcoholism and all the rest. Of course that would make access to Aboriginal children a lot easier for white offenders, they won't have to go so far to find a victim.

One last word on focus of attention. In the famous Redfern Address, the then Prime Minister, Paul Keating asked perhaps the most important question for all Australians to consider. He said 'We failed to ask the most basic of questions. We failed to ask - What if this were done to us?' What if this were done to us - to Mr and Mrs Average Australian, to our schools, youth centres, health centres, access to medical care, communities, homes, children, grandchildren? After all, current national health reports from a wide range of health organisations name sexual abuse of non-Indigenous Australian children as a crisis area in need of urgent attention. And the numbers of victims are higher. National reports into mainstream domestic violence, alcohol and substance abuse also call for urgent action, again the issues are at crisis level, and the numbers of victims and abusers are far higher than in The Little Children are Sacred report. None of the recommendations in all of those hundreds of national health reports recommend compulsory sexual health tests for every Australian child under sixteen. Not one of them recommends that a viable solution is closing down youth and health programs, in fact they all advocate that more are needed. None recommend that the victims' or the offenders' communities and homes should be surrendered to the Federal Government and put under compulsory lease agreements, and none advocate processes which would lead to either the victims or the abusers losing their rights under common law to their property as measure to control or remedy the occurrence of abuse. Would the Howard Government even dare to contemplate such as that? I think not. It would be un-Australian, and the Government it would expect immediate legal repercussions on the grounds of impairment of human rights, extinguishment of rights under common law, discrimination, and a raft of other constitutional issues. Besides, Mr and Mrs Average Australian don't, for the most part, live on top of uranium and mineral deposits or future nuclear waste dumps.

But seriously, the most critical question for all Australians to ask themselves in the lead up to this year's Federal Election is just that - What if it were done to us? With full acknowledgment of what has already been done to workers, trade unions, student unions, public primary, secondary and tertiary education, elderly care, palliative care, medicare, crisis health care, nurses, teachers, multicultural affairs, migrant groups, women, child care, small businesses and artsworkers, among the many, through the exercise of policies of social engineering and fear, your answer at the polling booth may just determine whether it will be done to you, or continue to be done to you. As reported in the Sydney Morning Herald 25th June, the Howard Government last week used the military to seize control of 60 Aboriginal communities in the Northern Territory, which are now under military occupation. This is not Israel and Palestine. The Northern Territory is not Gaza or the West Bank. This is Australia - but is it the Australia you thought you lived in? Walk in our shoes, Aboriginal Australia's, and ask yourselves, what would it be like to have this done to us? And then, walk with us.