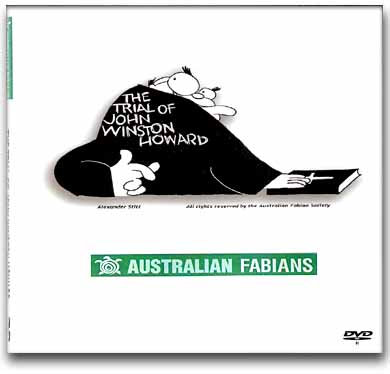 Part pantomime, part political satire - it is fabulous fun. In the lead-up to one of the most important elections we have faced, this is a timely and very serious message to remind the people in your life of the shame this little man has brought down on our country.

Julian Burnside and Rachel Doyle make formidable legal combatants. Who else but Linda Briskman, the head of the Centre for Human Rights could be a better choice for God. Rod Quantock wilfully incites the crowd and Max Gillies in the persona of Howard enjoys what little support he can from Her Gracious Majesty in the person of Gerry Connolly - who also brings us Paul Keating with his familiar and rambunctious interjections!

You may have seen the show, now you can share it with your family and friends .... If you missed it or would like to share it - it's not too late.

Get the DVD and invite your friends and neighbours around to hold your own trial in the tight security of your own home - around the Barbecue or a keg!

Straight from the raw footage of camera 1, below are some sample stills - click on the thumbnails to open the images, and smile!

"Thought the event was terrific and would like the DVD as well!"

"Congratulations on a marvellous show. Will a recording of the evening be available? I'd be willing to pay a reasonable amount to get one."

"Please let me know when the DVD of the trial is ready. Greatly enjoyed the show - was a bit scared waiting in the street. Thought ASIO may have been checking us out for being un-Australian and partaking in a threat to democracy as interpreted by JWH."

"You are aware, Ms Diabolica, that the Fifth Amendment is an American instrument?"

"Yes your Honour, but unfortunately so is my client."

Last sunday night, the Melbourne Town Hall was packed to the rafters. As the doors opened, the queue stretched around the block and up to - it was rumoured - Russell street.

Moosehead Awards? Dalai Lama? No - it was the Trial of John Howard, put on by the Fabian society, set in the Court of the Supreme Bean, Linda Briskman (Centre for Human Rights) with Julian Burnside as prosecutor and Rachel Doyle defending.

From the Fabian site:

"Her gracious majesty in the person of Gerry Connolly will grace us with her presence as a witness for Howard (God help him), Melanie La'Brooy will appear as a witness for the nation as well as number of others. Cast and crew have volunteered their time and brilliance to bring this man to book!"

It looked as if most of Middle Australia had turned out for this event. There were families from Brunswick and Thornbury to East Malvern and Blackburn - hardly inner-city Trotskyite types. If I were Mark Textor, I'd be feeling very queasy. Not only were the Doctors Wives all out in force, the doctors were all there too, along with the older doctors' kids. Lots of oldies there; two of the people in our group were over eighty - you just can't rely on these people to stay in their houses with the tartan rug over the knees any more. Troublemakers!

The ticket came with a printed warning:

"The bearer of this document will now be definitely known to ASIO, the CIA and sundry experts in the area of rendition, torture and detention centres and has never attended Kirribilli House or the Lodge as a fundraising guest of the Liberal Party or the Defendant."

I guess our chances of being invited to Kirribilli House for dinner are kaput now, too.

Buried down at the bottom of the program, "By popular request, Janette Howard does not appear." Zzzing! I guess it was a tough call whether to lampoon Hyacinth, and they decided to go easy on her, except for that little shot of acid.

It was intriguing to be part of such an old-style political event, in keeping with the Victorian architecture of the Town Hall. Despite the sophisticated AV equipment and auxiliary screens, this was the way we'd have been voicing our protest before blogging, forums and talkback: lampooning characters with a broad brush on the stage, with the house packed to the rafters with the ordinary voters cheering, booing and having the time of their lives.

Next day, the Hun headline was "Old, Tricky and Losing". Even the Murdochistas are abandoning John Howard. If I'm not careful, I'll find myself feeling sorry for the old rodent.