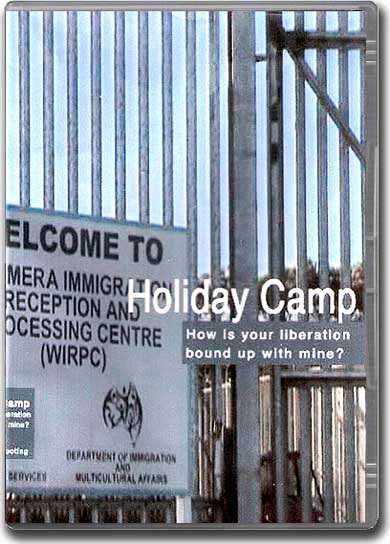 How is your liberation bound up with mine?

Holiday Camp is a 45-minute documentary, which investigates the current Australian immigration policies in the context of 200 years of colonization.

During the years following Tampa and the disastrous Woomera detention centre incidents it screened widely throughout Europe.

The BORDERPANIC project hosted the Australian premiere in Sydney, on the 11th of September 2003.

Holiday Camp connects the issues of indigenous dispossession, genocide, and the incarceration of refugees. It explores the implications of the mandatory detention system and the construction of national borders.

"If you have come here to help me, you are wasting your time ... but if you have come because your liberation is bound up with mine, then let us work together."

About the publication Drive-by Shooting, Holiday Camp (2002): This item is now out of stock, and we no longer supply it to our members or to the wider public. We suggest you could search for online new or second-hand copies to secure this product. 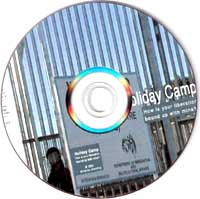 Holiday Camp investigates the current Australian immigration policies, in the context of 200 years of colonization. The unique documentary style juxtaposes challenging images, interviews, and personal experiences to intrigue and engage the audience in a satirical deconstruction of racism.

The pivotal action of the documentary is the 2002 Woomera detention center outbreak, which represents a significant protest against the political construction of national borders. To understand the different forms of protest, we invite the audience to consider how people are positioned differently around this real border. We also dismantle authorities in unexpected ways, to highlight that ignorance, as a weapon of mass construction, allows a privileged few to determine the plight of others - and yet we are all contained within an increasingly fortified global community.

Holiday Camp reclaims the voices of the marginalized and connects the issues of Indigenous dispossession, genocide, national constructions and incarceration of refugees, which are often portrayed as unrelated or divisive. Holiday Camp takes its name from a quotation by Philip Ruddock, (Australian Minister of Immigration and Indigenous Affairs), "...we go out of our way to ensure that the detention centers provide as much humanity as reasonably possible, without making them holiday camps..."

Ali and Baqir, two young Afghan refugees and ex-inmates of the Woomera detention center, share stories from their four-year long journey for asylum. They are Hazara, a religiously persecuted minority in Afghanistan, who fled from the Taliban, through various countries, on their way to their latest destination - Australia.

Asylum seekers who arrive in Australia without documents are 'welcomed' with the inhuman system of Mandatory detention. They are encaged and forced to wait in dehumanizing conditions, often for years, while their lives and futures are 'processed' by the authorities.

Ali and Baqir tell us about their life and experiences in Woomera, and discuss the insecurity of living under a restricted three-year temporary visa, after being released from this prison.

"Everyone has the right to seek and enjoy asylum in other countries free from persecution." (Article 14(1) of the UN Declaration of Human Rights)

Rebecca Bear-Wingfield, a Kokatha Senior Woman, speaks from the tent embassy she established at the Woomera2002 camp, to negotiate the potentially 'divide and conquer' tactics experienced by many marginalized people, when they become vocal. She describes how the Kokatha people, who are not officially recognized as the traditional landowners of the Woomera area, continue to fight for basic human rights and are involved in an ongoing protest against their land being used for nuclear testing, waste dumps, the detention center and uranium mining. Her understanding of the land challenges the dominant non-indigenous portrayal of the land as a hellhole in the outback desert and/or merely a bounty of mineral resources.

Ghassan Hage, a lecturer of social anthropology and cultural studies at Sydney University and Deborah Kelly, artist and activist, interweave the ideology of nationalism with the ongoing genocide, land rights issues and tokenism. They deconstruct the popular myth of asylum seekers. Ghassan Hage introduces his term 'the sensitivity of thieves', which connects the invasion and theft of the land from its traditional owners by 'boatpeople' 200 years ago with current Australian border panic. He suggests the fear of invasion is underpinned by a subconscious realization that the theft of the land could be repeated.

The catalyst for the documentary begins when we arrive at the Woomera2002 five daylong direct action camp, established in the desert, next to the razor wire fences of the Woomera detention center.

We witness the extraordinary civil disobedience action, which occurred during this convergence and then explore the consequences. Hundreds of concerned and outraged Australians dismantled the fences of a detention center and worked together with the inmates to support their jailbreak and escape. A supporter who assisted in the escape also shares her story. We meet an escapee on the run, whose plight and desire for freedom gives agency and a voice to the de-humanized, faceless refugees, who are often portrayed as a threat to our wealthy society by the mainstream media and ruthless politicians.

Recapturing the trauma of the event, the audience can hold their breath with embarrassment as we watch many refugees being re-detained, freedom stolen again, while others escape to an uncertain fugitive life.

A statement from the directors

Drive-by shooting/tallstoreez productionz is a three-person Australian/German film collective, based in Adelaide, South Australia. Founded in February 2002 we began work on this four-month project about the mandatory detention system in Australia and the Woomera detention center. Holiday Camp is the first film for all of us.

Our main agenda was to contribute a unique perspective on the international discourse about migration and the increasing border panic within the 'western world'. We focused on the connections between dispossession, people enclosures, and the ongoing global genocide. We want to share these issues with a broad international audience and intend our film to support people who are interested, concerned and/or engaged in human right issues. We employed satirical re-enactments, emotionally unsettling juxtapositions and alternative filmic structures within an overall 'aesthetic of hope' to depict ordinary people doing extraordinary things. We set out to explore how creative independent filmmaking can significantly support human rights activism.

Our storytelling benefits from our different cultural and gendered backgrounds and experiences. We positioned ourselves in the middle of the action, and then engaged in a self-reflexive dismantling of 'objective' journalism. The interview styles established the subject as the agent of their story, without a narrator speaking from a place of authority. We also provided opportunities for our main characters to access the ongoing editing process and to have control over the final output of their contributions.

For this film we used the miniDV format and an experimental handheld camera style, utilizing a network of Indymedia artists and activists. We use low end and relatively affordable editing and camera systems. To create and amplify more critical, independent input within the public domain we support media making which is accessible to non-professionals as well as full time media workers.

We have toured Holiday Camp throughout Europe and parts of Australia as a practical networking tool; to gather the latest information, connect different groups and campaigns, and we continue to send copies all around the world.

After witnessing the outbreak as if in 'real-time' the audience is invited to consider the complex issues arising from this border crossing - in particular the diversity of constructions about protest and activism. After the film we then present a discussion, including: