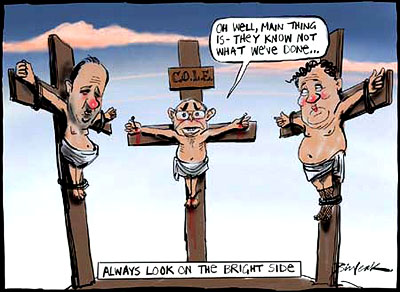 Bruce Haigh on the Wheat Board Inquiry

Bruce Haigh worked at the Foreign Desk in Jakarta, South Africa and several other countries before settling in Mudgee, where he grows "award-winning juices" from olives and grapes. Here is his take on the 2006 Cole Commission of Inquiry into the Australian Wheat Board.

Image: After The Cole Inquiry into rorts in the payments for wheat for Iraq, Federal Ministers Alexander Downer and Mark Vaile, and the PM John Howard and have well and truly hung themselves (Thanks to Bill Leak, The Australian).

The fall-out from the Cole Inquiry

It is very hard to see any winners emerging from the Cole Commission of inquiry into the AWB. It is however possible to see losers.

The government will get nothing out of the Commission except confirmation of its double dealing and lack of loyalty for those it puts in the firing line. It also raises the issue if it was prepared to agree to this inquiry why not into other more pressing and serious issues?

The successful wheat trader of three decades the AWB will be taken to the cleaners and it will take some time to regain its reputation.

The Labor Party will not be able to nail John Howard and probably none of his ministers.

The media were handed the issue by Volker. They have done little to check his facts or establish who else was involved in passing kick backs to Saddam Hussein. The Cole Commission has provided easy pickings. The spoon feeding of the media has only served to highlight how little investigative reporting has been undertaken in Australia over the past decade.

The Australian wheat trade has been adversely affected Australia's international trading reputation has been damaged and the single desk put under threat.

The Cole commission will do nothing to free international trade from corrupt practices.

From the evidence to emerge from the Cole Commission there seems little doubt that the Howard government backed the AWB until confronted by the UN Volker report in 2004. It then succumbed to US pressure and agreed to hold an inquiry into the AWB. What a farce when the Howard government has refused to hold inquiries into detention camps, SIEV X, infrastructure and water.

The government's support for sanction breaking by the AWB is the most recent example of "whatever it takes".

An effective Opposition and vigorous investigative media might have changed Howard's corrupt and corrupting style of leadership before it distorted AWB deal making.

Instead his cancerous political philosophy has been allowed to go unchallenged. He has given trade competitors a blunt instrument with which to hit Australia over the head as well as injuring the AWB, which in the past secured wheat deals of $4 billion annually.

Even before Vaile went to Iraq to local officials had stated that they wanted to continue to buy Australian wheat. They like it. It is amongst the world best milling grain.Why then would the AWB pay bribes? Who was distorting the market? Having high quality wheat much in demand the AWB should have been able to sell with a minimum of facilitation. We need look no further than the US, Canada and Eastern Europe.

To describe Volker, as one journalist has done, as the UN's tough minded investigator is to completely overlook where Volker's loyalties lie and they are not with the UN. But neither are John Howard's. He followed Bush to war in Iraq against the wishes of the UN. He dismissed UN complaints over Australia's incarceration of refugees and refused an inquiry so why set up one over allegations relating to the AWB?

The answer has to be that he could not resist US pressure. Which makes Australia's relations with the US even more unbalanced.

Howard has substantially harmed Australian trade at a time when the trade deficit reached a record $473 billion in February following 46 consecutive monthly trade deficits. Under these circumstances I would have thought Howard would be doing all in his power to foster trade.

In addition he has managed to threaten the future of the single desk thereby upsetting a significant number of rural Australians.

The Cole Commission has further underlined the mendacious nature of this government - if such a lesson were needed.

Equally galling has been the attempted moralizing of Beazley and Rudd over the issue. Keen as they are to try and get Howard they have been prepared to trample underfoot the AWB who until 2004 apparently believed they had at the backing of the government.

The payment of bribes can not be condoned, domestically or internationally. However it is easier to attempt to eradicate bribery from domestic commercial activities than it is internationally. And Howard has made the task more difficult by turning his back on multi-lateral and international organizations in preference to bi-lateral arrangements.

Just as bribery must be eschewed so must insider trading. A sad sideshow to the Cole Commission is the revelation that former Deputy Prime Minister, John Anderson, sold his AWB shares at a time when AWB officials were actively briefing politicians in Canberra during the second half of 2005.

He deserves the benefit of the doubt but he is going to have to come up with a more convincing explanation in light of his failure to record the sale of his AWB shares in the pecuniary interests register of parliament.

Anderson has protested his innocence, too much I fear. But if ever a case was made as to why Anderson should leave politics, this is it. He is a liability.

Which brings us to Beazley who wants us to accept his outrage over the AWB. This after his failure to lay a glove on Howard with respect to Tampa and children overboard. Since that time the Labor Party has found it well nigh impossible to be taken seriously when it seeks to take the moral high ground particularly in the absence of a position on the invasion of Iraq, detention of refugees and David Hicks.

All that stands between defeat of the Howard government and a Labor victory is Kim Beazley. Labor wouldn't need Cole and the AWB if it had developed comprehensive policy on renewal and development of infrastructure, education, health, aged care, aboriginals and the environment and refugees. Given the way this government goes about doing its business the Labor opposition should be able to keep it permanently on the back foot. Sadly the opposite is true.

Beazley's false passion and paucity of ideas only serve to highlight what a disgrace the Labor Party has become under his leadership.

Did we need to see him slink away from Simon Crean to know that he does not have what it takes.

It is to Australia's shame that the so called AWB scandal has secured more intensity of media coverage and Opposition focus than the Howard government's detention policies.

At any point from 2000 the government might have moved to bring the AWB into line and make good the damage to its relations with the UN. It would have avoided the spectacle of washing the AWB's linen in public with all the trade an diplomatic damage now done.

Dispatching Vaile to Iraq was a political move without substance. When Iraq says it will not deal with the AWB the influence of the US should not be overlooked.

He is naïve if he thinks looking into the eyes of a senior Iraqi official and minister and getting promises is worth a pinch of salt. The current lot of Iraqi Ministers and officials might be gone in six months.

For many years the US wheat industry has pressured Australia to get rid of the successful selling mechanism of the single desk. That in itself is sufficient recommendation to maintain it. If Howard is fair dinkum about his reasons for setting up the Cole Comission he should start with a full and wide ranging commission inquiry into the Department of Immigration.

The AWB fiasco should serve once and for all as the lesson on how the Howard government has sought (and achieved) outcomes by employing whatever it takes - the end justifies the means. But of course it doesn't.

And if you think the AWB looks weak and stupid in front of the Cole Commission wait until the Royal Commission into the Department of Immigration. What is the defence of people who have taken on the dirty work of this government, particularly when they have been pushed beyond the point where their judgment was telling them to do something different.