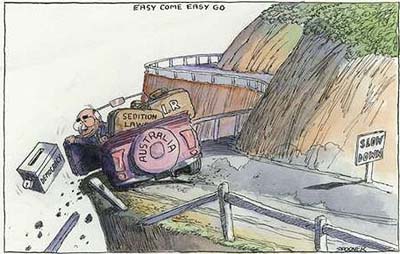 The Project SafeCom platform: a template for human rights?

Welcome to the entry page of our 2004 election campaign. We've formed it around trying to compose a platform of quotes, statements, speeches and articles from all Australian Federal Parliamentarians, both Senators and Members of Parliament.

All these statements needs to include opinion or statements by these politicians themselves about refugees and asylum seekers.

When we started the campaign, we wrote to everyone in Federal Parliament, asking for material we could use. As soon as we wrote, MPs and Senators started to respond - but not everyone. The response from Liberal and National Party MP's and Senators was slowest in coming, and we received just one or two replies. The ALP did a lot better, the Greens and Democrats however, responded quickly, fully and comprehensively.

And, in response to Mr Howard's 2001 Election slogan ("We will decide who comes to this country and in which way they come...", we formulated our own slogan for the 2004 election. Here it is:

"WE shall determine who governs this country, and in which way they govern..."

Update: AFTER the 2004 Election

It is November 2004, and the 2004 election came and went: just like the US George W. Bush government, the Howard government has a majority in both the Senate and The House.

This section will not be further updated. We have moved on to use this RED SECTION for The Project SafeCom Blog - our exciting online Australian Interactive Current Affairs section. Click the link or the button to explore and enter!

The bulk of the contents of this section centres around the list of members of The House, the Members of Parliament - and the list of Senators, the members of the Senate. These pages are linked in the two top buttons in the red menu - separated by the page that lists the marginal seats.

While the structure of this section is complete, the contents consists of quotes, speeches, articles, statements and parliamentary motions related to Australia's asylum seeker policies, the contents is still arriving at our desk - from refugee advocates around Australia as well as from parliamentarians themselves, and from Internet searches.

The quotes, statements, articles and speeches of MP's and Senators relate to their position to Australia's current asylum seeker policies and treatment.

Many of the statements and quotes have been gathered by members of Rural Australians for Refugees, often as a result of the Politicians' letter writing campaign launched a few months ago by Julian Burnside QC. The letter writing kit is downloadable below.

Your contributions are needed!

Our project is by no means finished. On the two pages for members of the House and the Senate, many MP's are still 'silent' - we haven't received any material from them or from refugee advocates. Please email their emails or letters to you - and bring them out in the open!

If you want to, download Julian Burnside's letter writing kit from the table below: it's an excellent way of making your local (or not so local) MP accountable - and drawing a reaction out of them. Please help us to make this campaign a success!

We're determined to never have a seriously manipulated election like the "Tampa election" in November 2001 again. We believe that Mr Howard gained government at that election by seriously distorting the truth about asylum seekers who arrive by boat.

To see more about how we believe the facts about asylum seekers are distorted by the Howard government, see our election platform here.

While the determination of MP's and Senators is still developing as we go public with these pages (December 2003), we have all current marginal seats listed on a page, and the MP's in both Liberal and National parties - as well as in ALP seats - are 'tagged' if they stand in marginal seats.

In this way you can leaflet for them - or leaflet against them....

4. No parties, but politicians

While we have no intention of "targeting" a political party, our evidence so far points squarely at many members of the current government, who keep peddling lies and manipulations in their talk about refugees and asylum seekers. But, there are some marvellous examples of MP's, also in the Howard government - regrettably mainly amongst the backbenchers. They have been marked with the accompanying statements they have made in public or in email communication with refugee advocates in their electrate.

Some time during the beginning months of 2004 we planned to bring out a "Dummies' Guide to How To Stand As An Independent" - but it didn't happen, time prevented us from doing this. However, we want anybody to consider standing as an opposing candidate in a Federal electorate - thus stealing votes away from those who they seek to kick out of government. In many marginal seats this is a very feasible strategy.