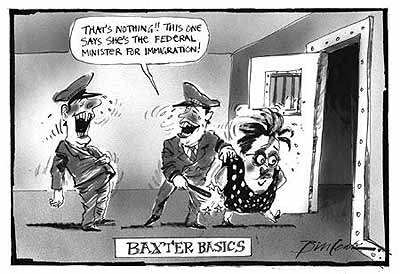 Cornelia Rau's sister Christine gave this speech on May 30 2005 when launching her family's submission to the Palmer Inquiry at NSW Parliament House. She gave special thanks to the University of Newcastle Legal Centre. "I'm calling it the 'UNLC report'. Without them it could never have been done."

Cartoon: Thanks to The Australian's cartoonist Bill Leak.

This speech was first published at Margo Kingston's Web Diary, Australia's first and only fully democratic, open and hopefully for always a fully independent daily Opinion and Issues Newspaper.

ecause of the complicated nature of Cornelia's case, with four jurisdictions involved, it was always unrealistic to expect the Palmer inquiry to report by late March. Recent events have overtaken the inquiry even more, with now an extra 200 cases - at minimum, we're told - of wrongful detention by the Immigration dept coming to light.

We sense that the climate has changed during the course of Mr Palmer's inquiry, especially in the last week or so. Even more information than we or Mr Palmer will have been able to locate is more likely to be forthcoming to a proper judicial inquiry. We believe that more people will now be encouraged to come forward with vital information: prison and detention centre guards and officers, fellow inmates and detainees, DIMIA officials.

Mr Palmer will be finalising his report on Cornelia's case and perhaps that of Vivian Alvarez Solon, who was wrongfully deported, in about two weeks. After that it goes through the vetting process by the Immigration Department and also a host of state agencies that were involved, and hopefully we'll also get to see a copy of the draft report before it's released.

We have written 107 pages and made 44 recommendations. Because Mr Palmer's inquiry has been limited by lack of powers, we feel that this UNLC report complements the information Mr Palmer has received.

So we're hoping that between us both we'll be able to get a reasonably accurate picture of what happened to Cornelia: how a person innocent of any crime came to be locked up first in a jail and then in a detention centre, for ten months in total.

We sent the UNLC report to Mr Palmer last week. It is the culmination of three months' work by more than 30 people, principally five lawyers from the Uni's Law School, 25 students who worked incredibly hard, myself and my parents.

The whole thing basically started out at my kitchen table when I started fielding calls from people who had bits of information about what had happened to Cornelia. Then thankfully the Uni got in touch and we were able to all work together to deal with the many issues involving Cornelia's ordeal.

I'm not going to go into our report here because you can read it for yourselves. We have attempted to point Mr Palmer in the right direction. We must now await his report. But whatever Mr. Palmer finds will not be enough. There must be more.

We are heartened to see reports that Mr Palmer is indicating to the Minister the need for a judicial inquiry into other cases of wrongful detention and deportation. We do not want Cornelia to be left out.

We believe that there should be an open judicial inquiry into Cornelia's detention and the wrongful detention and deportation of all others.

Cornelia's still being treated in Glenside hospital in Adelaide, and what her prognosis is remains unclear. We are following her progress day by day, and can only hope that somehow, with help, she can resume a normal life.

She has had a terrible ordeal and is understandably angry about it. She was locked up in isolation, has said she felt treated like a caged animal, for the crime of mental illness which led her to lie about her identity.

In investigating Cornelia's case, our eyes have been opened to another country, another Australia unrecognisable to most of us, where people deemed not worthy of our proper care are treated without respect.

The way she was mistreated by the federal government under the Migration Act is not unusual in detention centres. The only difference about Cornelia was that she happened to be an Australian resident, and that her situation came to public light.

For me personally, this UNLC report has been the product of 115 long days' work. I'd like you all to do something today, at least in your minds eye. I had to do it myself to help compile a chronology of events.

I got out an old diary from 2004 and marked off each of the 44 weeks, or 309 days Cornelia was wrongfully detained. In this diary were all those mundane, everyday things you do in your life: bills to pay, school events to go to, doctors' appointments, birthday parties, visits to friends...

So, imagine your old diary from last year and all the things you did in 309 days.

Then take a 94-day slab of that diary and imagine that for that amount of time, you are locked in a small room, like Cornelia was in Baxter's Red 1 compound, with no-one to talk to, with nothing to look at.

No mobile, no landline, unless someone from outside knows you are there, and you are called to the phone by your detention centre number, in Cornelia's case, 8311, not your name.

Imagine yourself in that room.

You have no choice in what you eat or when you eat it, no outlets for your mind or your spirit. The biggest thing to look forward to is the four hours you are let out, if you are lucky, to pace a square of grass, the only view being a rectangle of sky.

Look at all the things you noted in your diary, and then imagine this alternative existence day after day, month after month.

Imagine that for two weeks of that time, you are in an even more secure isolation unit called management, where strangers can peer into your cell at random and watch you going to the toilet or having a shower.

Imagine that this isolation causes you to weep and even scream in distress and that everyone with any power to do something about it at best ignores you and at times even taunts you.

Imagine that this comes on top of six months spent in an environment totally alien to you, that of a secure section in a Queensland jail. Where every signal you send out can be misinterpreted in the social jungle that is prison life.

Imagine all this, and you have committed no crime, you have seen no lawyer, you have been denied outside contact to ask for help.

Ask yourself how you would react if a member of your family had been treated in this way.

Cornelia's case has been described as a catalyst for change in immigration policy. Whether or not that's true remains to be seen.

Certainly Mr Palmer has been looking at many of the issues that we have, and we are hoping his report provides a blueprint for at least some changes. But all the reports and research and recommendations in the world are meaningless unless they are followed by action.

Our recommendations have been spelt out in this UNLC report. I have four broader, personal suggestions.

Firstly, the Government should do a thorough audit of how many hundreds of millions of dollars Australian taxpayers are spending each year to imprison innocent people and to deport them back to countries of risk, and it should make this information public.

Secondly, because it feels so comfortable with its policy, the Government should allow the public to see inside detention centres through random visits from the media and judge for themselves what the conditions in there are like.

This should include locations even more remote than Baxter, like Christmas Island. Ask yourselves why the media have been banned from detention centres. Only with this insight can the public make an informed electoral choice about whether they want to agree with detention policies.

Thirdly, it should be mandatory for all politicians to visit a detention centre - randomly - and that they actually talk to some of the people they are locking up. They could spend a couple of hours in an isolation cell and also eat a detention centre meal, just to get a proper feeling for the place.

Fourthly, should the mandatory detention be debated in Parliament, all politicians should be allowed a conscience vote on the issue. Otherwise political parties can rightly be perceived as adhering to policies they find unconscionable.

I think if these four simple suggestions were followed it would soon become clear how ordinary Australians, and their politicians, really felt about how mandatory detention works in practice.

But in the end, I think all of us failed her, because by inaction we have become complicit in a system that lets us lock away refugees in the desert and deny them human rights.

There must be other more humane but effective solutions for deterring illegal immigration. Those solutions should be found before more Australians are lost in the mandatory detention system.

Mandatory detention in its current form should not be Australia's final solution to the vulnerable and uninvited people who have arrived seeking refuge on our shore.

Mandatory detention is too drastic, too damaging, and out of control.