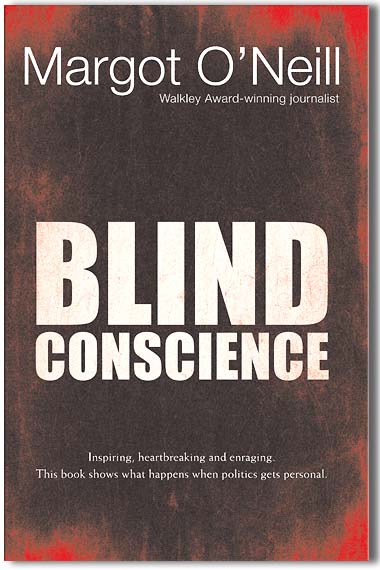 This profoundly moving book reveals the untold story of the people who struggled to get asylum seekers out of detention and change government policy.

Lateline journalist Margot O'Neill, who covered many of these stories while they were happening, paints a compelling and heartbreaking picture through an extraordinary cast of characters.

Some, like Petro Georgiou, Julian Burnside and Philip Ruddock, are very well-known.

Others are not famous but simply felt compelled to follow their consciences and act to help desperate people in desperate situations, often to the detriment of their personal well-being.

"Blind Conscience tells the harrowing and inspiring stories of some of the key players in the refugee advocacy movement during the Howard government."

Mandatory detention of asylum-seekers has been a prominent public issue for almost a decade. It has provoked shame and anger across society, been manipulated politically by all sides and has prompted many to become actively involved in campaigns in support of asylum-seekers.

The government's recent response to the crisis precipitated by the arrivial of the West Papuans and the widespread protest that followed show that the refugee crisis is not over.

Nevertheless the prospects for incarcerated asylum-seekers have improved markedly since the intervention of Petro Georgiou and other federal Liberal backbenchers. This shift and the time that has passed since the Tampa incident, children overboard and near saturation coverage of individual asylum-seekers provide the opportunity for some reflection.

Margot O'Neill has covered many angles of the story herself, but writes now about the way Australian society at large was affected. She uses individuals - activists, psychiatrists, lawyers, politicians, prison guards - with direct experience to tell the broader story. This gives the book a strong narrative drive and a powerful emotional charge. (Source)

Margot O'Neill is a senior reporter with ABC TV's Lateline program. She has been a journalist for 25 years in television, radio and newspapers and has worked on a variety of ABC programs including Four Corners. Margot has twice won a Walkley Award including for 'Best Investigative Reporting' and has also been awarded a UN Media Peace Award and the national Human Rights Award for TV reporting.

Margot O'Neill tells the story of ... how a diverse range of refugee advocates from Liberal dissidents like Petro Georgiou to top flight medical specialists and lawyers to full-time mothers and hard-left radicals created an unlikely new wave of political activism against the Howard government that transformed their lives, their friendships and sometimes even their patriotism.

About the publication Margot O'Neill, Blind Conscience: This book is now out of print, and we no longer supply it to our members or to the wider public. We suggest you could search for online second-hand bookshops to secure your copy.