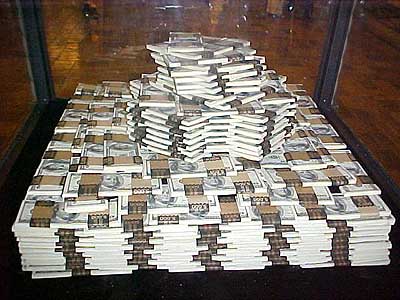 First jail them, then send 'm the Bill

Australia bills refugees for jailing them

Australia has the audacity to jail all "maritime" asylum seekers that arrive at its borders.

These are the asylum seekers who arrive under their international right to "seek asylum in any country" (Art 14, Declaration of Human Rights).

When the horrors of detention are over and they are released, Australia enacts an equally brazen audacity: it sends them a Bill for the cost of having jailed them - often for years.

Barrister Julian Burnside QC claims there's only one other example of this ghastly practice: in Nazi Germany, where the Hitler regime sent the bill for accommodation in their concentration camps (also itemising the cost of the gas pellets) to the families of Jews who were exterminated.

Apart from the shocking aspect of a massive debt against the Australian Commonwealth that deeply shocks the recipient, this law is deliberately intended to injure, for years to come, the human rights of those who receive it: the computer on every airport and in many embassies will flag and alert immigration and customs staff. In keeping this law in place, Australia undermines the right to freedom to travel and the right to movement across the globe for all asylum seekers and refugees.

This page is about the Billing for Detention policy. Below is an outline of the policy, written by Labor for Refugees Victoria, including - in the blue-rimmed box - the motion that was endorsed and passed during May 2008.

Billing Asylum Seekers for the Cost of their Detention

The Victorian Branch of the ALP calls upon the Federal Parliamentary Labor Party to urgently repeal Section 209 of the Australian Government Migration Act 1958 under which asylum seekers are billed for the cost of their mandatory detention, and calls for the existing Section 209 debts to be waived.

The practice of sending a bill to this most disempowered section of the community who have had no say in their detention and who have merely exercised their right under international law to seek asylum in this country is grotesque and reprehensible.

The Migration Act 1958 s.209 stipulates that a 'non-citizen' who is detained is liable to pay the Australian Government the costs of his or her detention. This liability includes costs of transportation of the person to and from an immigration detention centre and the daily allowance amount for each day the person spends in detention, and under s.211, the cost of removal from Australia for those who are deported.

It applies to anyone who entered Australia without a visa and who spent time in a Detention Centre; therefore to all individuals or families who -

The policy, and administration of previous debts, has been inherited from previous Australian governments. This policy was originally intended to "minimise the costs to the Australian community of the detention, maintenance and removal or deportation of unlawful non-citizens". However, in applying this debt legislation to genuine asylum seekers/refugees, it further burdens some of the most vulnerable people in society, many of whom have already been traumatised by war or other violence and hasty departure from their countries or origin. These people, detained under the mandatory detention Act, after fleeing intolerable circumstances, now find they have a large debt - applicable to all detainees (even if not later pursued). They, of course, had no choice over the fact of their detention, the duration of their detention, or the place where they will be incarcerated.

Why change is needed

Labor for Refugees (Victoria) is calling for the urgent repeal of Section 209 under which asylum seekers are billed for the cost of their mandatory detention, and for the existing Section 209 debts to be waived. The practice of sending a bill to this most disempowered section of the community who have had no say in their detention and who have merely exercised their right under international law to seek asylum in this country is grotesque and reprehensible.

The new Federal Labor Government has a unique opportunity to lead change in community attitudes to refugees and asylum seekers, to restore respect for human rights and Australia's international treaty obligations and to create a more sympathetic, outward looking and inclusive Australia. Refugees and asylum seekers make up less than 10% of the current migrant intake yet they constitute one of the most vulnerable sections of society due to years of vilification, significantly harming their personal prospects of successful resettlement in Australia, to the detriment of the community as a whole. Those who have arrived 'on shore' by boat have been particularly singled out for destructive political rhetoric yet their numbers overall are comparatively small.

Please discuss this matter at your branch or FEA and send motions of support to us, as below.