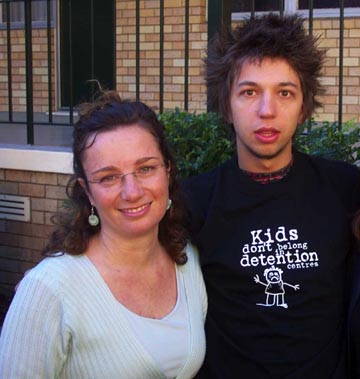 Alanna Sherry is the coordinator and spokeswoman for ChilOut, and for a little while, Alanna is in Western Australia on a short holiday ... and we managed to secure some time for us as a guest.

This Fundraiser, at the Elephant and Wheelbarrow in Northbridge, aims at gathering funds for CARAD, the Coalition Assisting Refugees And Detainees.

The proceeds of the fundraiser will be used exclusively to help create possibilities for outings and other special things for the children of families on Bridging Visas.

14 August 2004:  Merlin Luck, the Magician - It was exactly the boost the refugee movement in Australia needed. On prime time, a young Australian was making a political statement. You could hear the sounds of tinnies dropping to the floor across the nation. The television broadcast was watched by more than 1.8 million people on that unforgettable Sunday evening.

16 August 2004: Two Refugee forums with Senator Andrew Bartlett - In Albany and Perth, 16 &18 August 2004, the Democrats lead us into debate of long-term mandatory detention of asylum seekers: the policy not only breaches multiple UN treaties, it goes against the principles of any decent and humane society. In Albany with Chilout's Alanna Sherry, Hazara refugees and Brian Greig.

11 September 2004:  MOVIE: Letters to Ali with Merlin Luck, the Big Brother Spoiler! - With Big Brother protester Merlin in Perth for just one day, our movie matinee where we screened Clara Law's Letters to Ali, snapping up Merlin Luck as the keynote speaker, became the only chance for people in WA to meet the refugee advocate who had rapidly become a national human rights defender while it also became the biggest screening of the movie's season for Luna On Essex in Fremantle.

A Children's Fundraiser for CARAD

During the fundraising dinner, Alanna will give a short account of ChilOut's work. Meanwhile, check out the ChilOut website here.

Alanna Sherry is the coordinator and spokeswoman for ChilOut, and for a little while, Alanna is in Western Australia on a short holiday - because she's been told that Perth is "the Paris of the South".....

ChilOut, or Children Out of Detention, is a mainly Sydney-based lobby group aiming to get all the children (and their caregivers) out of Australia's detention centres.

Alanna's background is in law and public policy. Alanna is a human rights lawyer specialising in international law relating to children and refugees, who for example helped develop Representation Principles for Children's Lawyers for The Law Society of NSW. Alanna worked at the Australian Human Rights Commission (HREOC) on its National Inquiry into Children in Immigration Detention. She has also worked at the NSW Commission for Children and Young People and as an Advocacy Manager for UNICEF Australia - during which period she also visited an immunisation project in western Myanmar (Burma), on the Bangladeshi border. Prior to that, she was a diplomat in Canberra and Hungary, and taught Australian Studies at Budapest (Eotvos Lorand) University.

The refugees on "Bridging Visa E" (BVE) holders are the most underprivileged refugees living in the community. They do not qualify for Medicare assistance. They do not get housing or legal assistance. They are not allowed to work. They are not allowed to access ANY government services. They do NOT get concession on train, bus or taxi travel. They do not get any Centrelink pension or benefit. By deliberate government policy design, they are one hundred percent dependent on help from churches and charitable organisations.

One of the organisations in Western Australia, supporting BVE holder families and their children, is CARAD, the Coalition Assisting Refugees and Detainees. Supported by the Uniting Church, CARAD, together with its countless volunteers, has supported many refugee families in Perth and other areas of Western Australia. Click on the logo for more information about CARAD.

This Fundraiser aims at gathering some funds, used exclusively to help create possibilities for outings and other special things for the children of the Bridging Visa holding families.